The Gift of the Magi

In the short story “The Gift of the Magi” by O. Henry I feel that there is more than one theme that can be seen through the story, that of love, giving and sacrifice. The theme in a story is a representation of the idea behind the story. (Clugston, 2010) The main idea is that the best gift is that which is most sincere and comes from the bottom of the heart instead of an extravagant, lavish possession that would bring nothing to the warmth of the human relationship.

Turn in your highest-quality paper
Get a qualified writer to help you with
“ The Gift of the Magi ”
Get high-quality paper
NEW! AI matching with writer

The author’s idea is especially emphasized when both of the main characters discover that what they had received would not be of any use to them.

In this way, the gifts that the two loving spouses give each other become symbols of the passionate love that they feel for each other and that will never be extinguished by their poverty. The idea of what is material and indeed lacking in their world steps even farther back to let the reader understand that those two souls have given and received the wisest and most precious gift, that of emotion and affection.

The story’s theme is helped by the narrator’s third person point of view with limited omniscient, he’s the storyteller, telling the story as an outsider looking in .

It’s as if he sees everything, but limits himself to Della’s point of view by choice to help the storytelling purpose. If the narrator described everything that was going on, it may ruin the ending.

The story is mainly told as we follow Della. Though Jim is a big part of the story we do not see much of his character and when we do it does not show us much as with the reaction to Della’s new haircut. We know the narrator is really more like an omniscient being, because he speaks as an outsider in order to make more of a general view.

This is seen when the narrator speaks about the magi which is not something Jim or Della has realized within the story itself. But there are other places too, like when he zooms out from the weeping Della to describe the apartment details. Another element that helps show the story is the description of the setting with the richness of Della and Jim’s love for each other, the author writes about a lot of little details to make their undesirable surrounding circumstances as unappealing as can be.

Then there is the apartment they live in, with its malfunctioning mailbox, dead doorbell, worn red carpet, and cheap mirror equivalent. Detail is giving to describe Della’s “old brown jacket” and “old brown hat” and Jim’s worn jacket and gloveless hands. Also the setting of the outside the home is a dull scene out the window with a “gray cat walking a gray fence in a gray backyard. ”(Henry, O. 1906) All of this imagery creates a contrast between the rich, warm, inner world of love and affection which Della and Jim create, and the gray, ugly, outer world of money and work and dreariness.

Their love transforms their apartment from being part of dreary outside world into the beautiful colorful place. Throughout reading this story I could not imagine another way for the story to be done. I think the third person narration provides an in-depth way for the reading to experience the story. The narrator’s descriptions of the setting and characters bring out the visualization of the story, with such great descriptions it lets the reader become part of the story and you can almost feel how the characters are feeling in situations.

I believe with the majority of this story being told as the narrator looking in and focusing much of the story on Della, it provides the reader with an uncertainty about the conclusion of the story, which I feel is very important because it makes the reading more interesting. The narrator also has a way of showing the reader how much love Della and Jim have for each other without directly saying it, he makes you feel it with the characters actions. 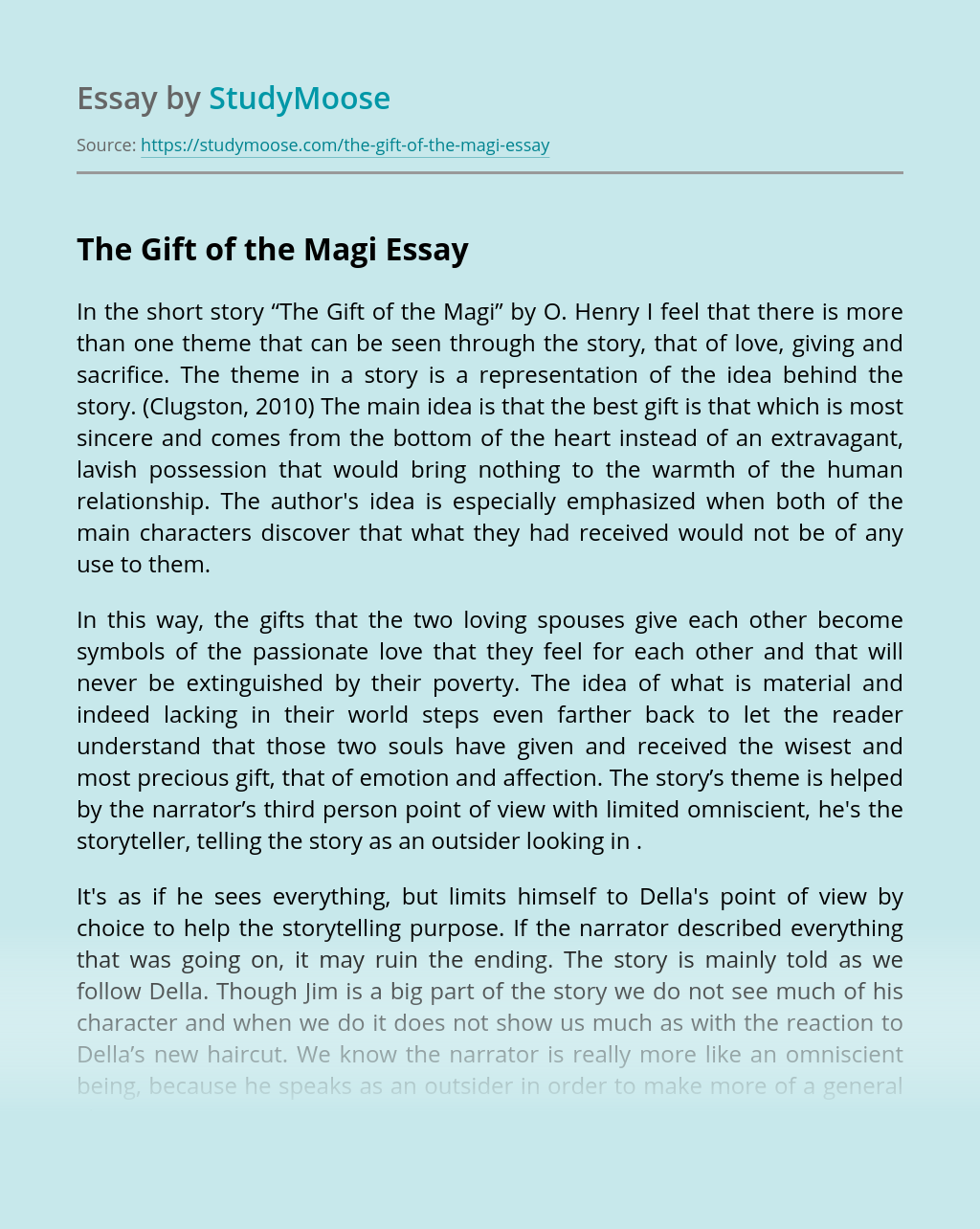 Turn in your highest-quality paper
Get a qualified writer to help you with
“ The Gift of the Magi ”
Get high-quality paper
Helping students since 2015
Stay Safe, Stay Original