Fighting Against Violence in the LGBT Community

Fighting Against Violence in the LGBT Community

Violence against the LGBT community is a horrific and inhuman reality. Violence targeted at this community because of their sexuality could be physical or psychological. With times changing and an acknowledgement of LGBT rights growing there has been a reduction in the cases of violence. However, a reduction is not enough- it needs to stop completely. All of us have a duty in safeguarding the rights of LGBT. One major way we can do this is by creating public awareness.

Don’t waste time
Get a verified expert to help you with Fighting Against Violence in the LGBT Community
Hire verified expert
$35.80 for a 2-page paper

Watching the films “Celluloid Closet” and “Boys Don’t Cry”, reveals the sufferings that LGBT people have to undergo. It is surprising that even in the modern world, society has still not fully given room to accommodate homosexuals. Much needs to be done in this regard. Leaders should spearhead this fight against violence directed towards LGBT people. It is important to recognize that they are human beings, and sexual orientations notwithstanding, need to be recognized as such.

It is important to realize that homosexuality will never end and it is here with us whether we like it or not. In this paper, we look at what factors that motivate violence against LGBT and what can be done to end this violence against the otherwise innocent people.

There are many motivating factors that make the mainstream population in the society resent LGBT community (Meyer, 851). They include cultural beliefs, religious beliefs, social beliefs and political factors. The norm that is socially accepted is that people should be heterosexual.

Contravening this norm is therefore classified as social abnormality. The society frowns at any person that does not conform to what is socially “accepted”. However, what the people making up the society forget is that the definition of what is right or wrong is a matter of choice and highly variable. From the cultural point of view, humanity has a mentality that what they have found being done is what is right. In addition, they think that how things have been done before is how they should continue being done. In this regard, we can realize that heterosexuality is what has been the culture since antiquity according to the view of the majority. For this reason, homosexuality is taken to be an abnormality in the definition of the existing culture.

Religion itself has its definition of what is right (Meyer, 852). Let us look at the view of Christianity on homosexuality. This is simply because Christianity is the largest religious group in the world and its decisions impact a large number of people. When it comes to relationships, Christianity advocate for a heterosexual relationship. There are two major reasons they use to back this argument. First, they quote the Bible that God created a man and a woman in the beginning. This means that by creating a man and a woman, God wanted them to live in a heterosexual relationship. Therefore, according to Christianity, it was God’s plan to have heterosexual relationships. The second reason that is also backed in the Bible is that it is only a man and a woman that can come together and reproduce. This is biologically true. A man and a man or a woman and a woman cannot reproduce. To support their argument, religion states that the reason why God created a man and a woman was for procreation. However, what the religious society forgets is that there are people who do not follow their teachings and they have the rights not to do so. There are also those who believe that relationships are not for the purpose of reproduction alone. They can be used to fulfil other human needs such as happiness and companionship. Religions discuss care and love for one another, not hatred and pain. Cultural beliefs foster respect and growth, not violence and attacking. Social beliefs are meant to create togetherness and community, not divide people. Even though the mainstream population in the society does not agree with the lifestyle of the people belonging to the LGBT community, they should accord them their freedom to live in peace.

Violence against LGBT is being propagated even today (Kendell, 18). Many people have suffered over time on the grounds of homosexuality. Many have died and others injured. In America, there are numerous reports of these cases of violence. Many of the cases are those of assassination. As recent as this year, homosexual rights are being violated. A notable example in the US is the shooting of a man by the name Mark Carson in Greenwich Village in New York because he was gay. This incident happened on May 17, 2013 (Reuters). Homophobia is the leading reason why homosexuals are the target of violence. Those propagating this vice are arguing that they are acting in the best interest of the society to prevent this irregular behavior from getting deep into the society.They back their argument saying that they are protecting the future generations from learning from what is happening. However, this inhuman violence against LGBT community cannot be accounted for by using such arguments. This is because, the rights of the person are being violated and to say that you don’t agree with what they are doing does not warrant causing suffering to the point of death on these people. Therefore, it is disheartening to see these people suffer even at this modern time. People should wake up and help stop this practice once and for all.

It is encouraging to see that LGBT community is also actively fighting for their rights. Even though it is not easy fighting against the society, slowly and progressively they are making their voices to be heard. Before, it was not possible to hear anyone speak about gay people or lesbian people in the public. The same case was with transgender issue. This is because there was a huge stigma associated with such issues. Nobody could proclaim in the public that he was gay or she was a lesbian. These individuals felt isolated from the society. Their problems could not be aired out. It is like they did not exist. However, things have changed in the recent years. These people have realized that they need to live in peace. They have said enough is enough in terms of living in isolation. They have decided to make their presence recognized though amidst resistance. They have formed movements to advocate for their rights in the society. These movements are headed by strong activists. An example is the Gay Liberation Front that was formed in New York to counter the episodes of police harassment. The main objective of this movement was to promote a radical social change of attitudes towards homosexual people. The movements used tactics such as demonstrations to contest against the prevailing social discrimination. However, in most cases, whenever these movements protest peacefully, anti-gay movements come in and attack the LGBT community movements. Therefore, it is clear that a lot more needs to be done to protect the rights of LGBT. An example of such a peaceful demonstration that turned out chaotic is what happened on October 12, 2013 in St. Petersburg in Russia. While the LGBT community activists were staging a peaceful demonstration, an anti-gay group stormed in against them. This episode led to the arrest of about 67 people including some of the gay activists. The Gay flag was destroyed (Reuters). Another incident occurred in Russia still on November 3, 2013 where an LGBT event in support of receiving free HIV testing was attacked. Two men wearing masks entered the room carrying guns and shot two people in the face (Reuters).

The society seems to listen to the plight of the LGBT community although the change is slow to come by (Fredricksen, et al.,22). States are changing their stance to the favor of the LGBT people. Many nations have taken steps in recognizing the existence of LGBT community thanks to their persistence in pushing for their rights. In the United State, the rights of the homosexuals have been categorically stated in the constitution. Laws have been formulated to protect the rights of the homosexuals. Violence against homosexuals is therefore a criminal offense in the US. It is classified as a hate-crime. Many nations have followed the same route. The UK has also decriminalized homosexuality. It isalso a criminal offense to attack another person or a group of people on the grounds of homosexuality. Even religion is slowly changing its stance on this issue. The Catholic Pope has condemned violence against homosexuals saying that killing and injuring these people does not auger well with the religion. However, the sad part is that still homosexuals are not accepted in the entire society. They are not given equal treatment like other people. In the US, there is discrimination in getting employment. In addition, this discrimination is present in seeking medical services such as HIV testing and Counselling. These are the reasons why LGBT activism is not going to end any time soon

The proper way to go about agitating for equality and eradicating violence altogether is spreading awareness; sometimes that can be done in methods other can marches or protests. Pop culture has had a huge impact on the way people observe and understand the LGBT community. The movie industry has also helped in shedding light on the issue. Two movies specifically, the “Boys Don’t Cry” and the “Celluloid Closet” have done so. The “Celluloid Closet” is a documentary that looks into the world of Hollywood gay culture and the progression of stereotypes to a positive change. Production Code influenced films throughout the years. It presumed that issues of homosexuality would not be discussed or created in the films. Furthermore, the film shows the way homosexuality was portrayed, when it was portrayed. The “Boys Don’t Cry” is a film about a transgender man played by Hillary Swank. This character desires to be a man while she has female parts. In her association with men, she ends up being raped and beaten. This clearly depicts the suffering of the transgender people. The stigma associated with her case cannot allow her to report such a case.Films such as these two discuss very important topics and visually force people to acknowledge the things that have happened. Moreover, joining organizations and donating to the events that help fight against violence in the LGBT community is another way though which we can help.

There have been decades of both violence and growth in relation to the acceptance of the LGBT community. While violence still continues it is important to note that the number of organizations and people fighting for equality has grown to great heights. Meanwhile, the LGBT community is not relenting in their efforts to fight for their rights. The society should learn to tolerate the lifestyle of the people that they disagree with. It is important to remember that these individuals, the homosexuals, are human beings in the first place. They therefore deserve the respect as human beings. The world at large is learning to live with LGBT people. They are slowly getting acceptance. But the fight must continue until when LGBT persons will enjoy full rights just like others without discrimination. Individuals who arepart of the community and those who are not have come together to end violence and promote respect for all.

Fighting Against Violence in the LGBT Community. (2015, Oct 07). Retrieved from http://studymoose.com/fighting-against-violence-in-the-lgbt-community-essay 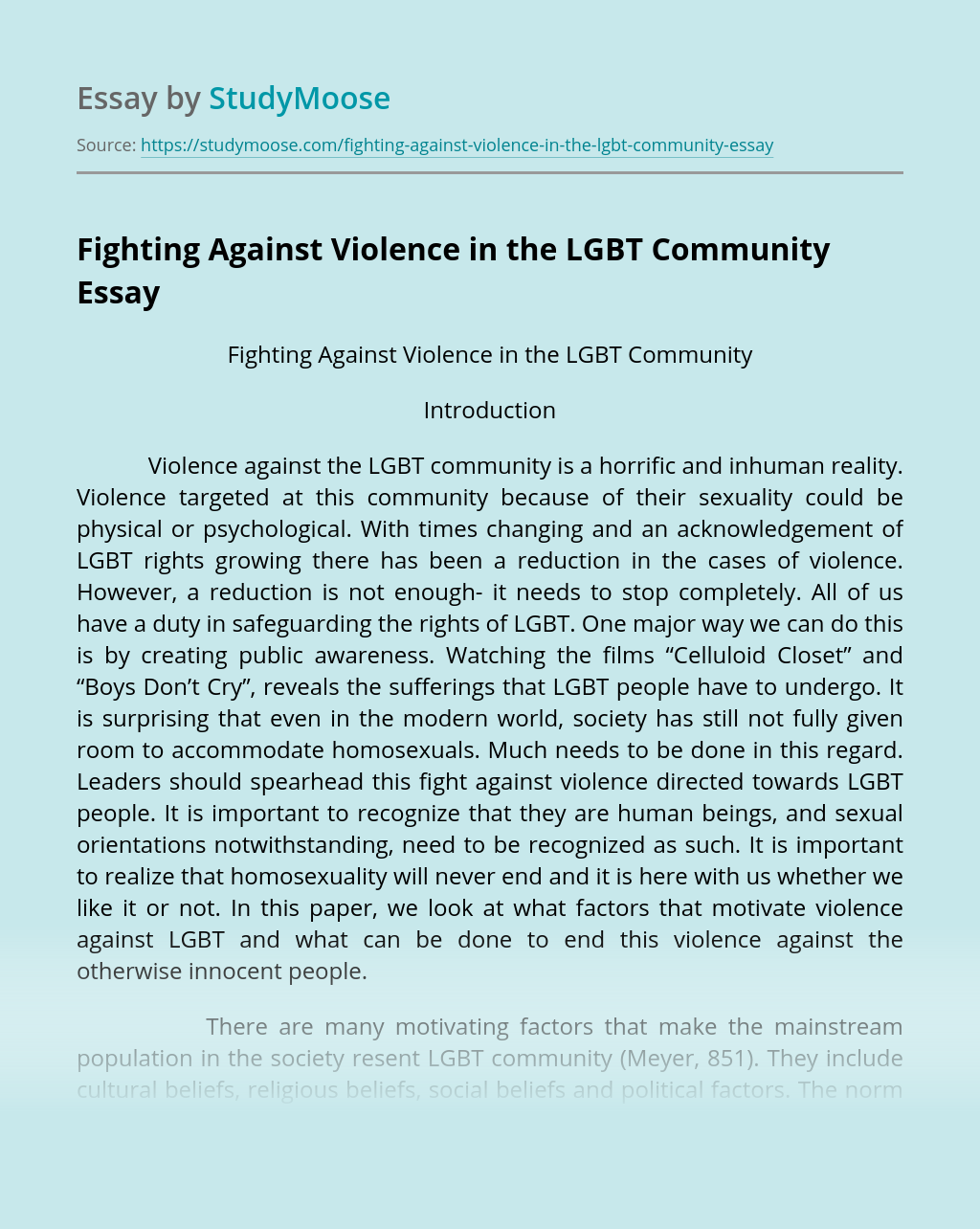 Don’t waste time
Get a verified expert to help you with Fighting Against Violence in the LGBT Community
Hire verified expert
$35.80 for a 2-page paper
Stay Safe, Stay Original