Introduction
There have been several anti-gay bills introduced in several states across the country in which some states are against and some are for the bill. We would like to discuss the issues that the lesbian, gay, bisexual and transgender (LGBT) individuals have faced across the nation by presenting the facts from reliable sources. The issues, challenges, and opportunities experienced by this group in the labor force will be brought to our attention. We would like to explain how society has identified this group and the legal issues they face.

We plan to deal with the social, economic, religious, and governmental aspect of LGBT rights while living in this country and other countries through out the world. Different states have different ideas about the acceptance and rejection of LGBT. We would like to focus on the issues, laws, identities, challenges, opportunities, solution, and discriminatory actions that LGBT individuals encounter through the labor force as well as in society. Issues, Challenges, and Opportunities

While the LBGT communities continue to face discrimination in the work place, there have been laws set in motion and even passed giving them the equal rights as other citizens of our country.

Some LGBT workers have reported some form of harassment and mistreatment on the job across the years, causing a great impact on our nation’s views. The workplace abuses have posed a real and immediate threat to our economic security. We feel that Congress should quickly pass the Employment Non-Discrimination Act (ENDA) to ensure that all Americans are judged in the workplace, not according to their identity, but rather according to their skills, qualifications, and quality of work they perform.

Too many are judged according to their sexual and gender identity rather than their performances. A lady by the name of Dolores Huerta gave a rousing speech back in 2009, at the National Conferences on LGBT equality, urging a change in the labor, race, and LGBT movement for a better future.

Within certain areas, there are now laws in place which prohibits employment discrimination against public and private workers on the basis of their gender identity and sexual orientation; however, until these laws are taken serious, the LGBT workers in state and local government will continue to face un-equality and discrimination on the job. Without certain laws passed, they will be unable to take legal action to protect themselves and their families. Some of the challenges they face are Social Security survivor’s benefits, paid to the same sex life partner of someone who dies, their medical regulations, social insulations, ageism, and hospital visitation with the right to die in the same nursing home of same sex partners. There are tax laws and other regulations of 401Ks and pensions that also discriminate against same sex partners. Today the LGBT now have opportunities in the labor force that allows them to ‘don’t ask, don’t tell’ (DADT) which is a policy regarding the LGBT serving in the military.

They now have the opportunity for equality as other citizens, academic achievements, benefits of same sex marriages under federal law, equal employment benefits, legal permanent residency, and domestic partnership benefits. “The increased visibility of LGBT people, combined with more assertive demands for equal rights, has generated considerable legal action. For the past decade, federal, state, and municipal legislators debated changes in legislation that would affect LGBT minorities in almost every aspect of their lives, including violence and harassment, employment and housing discrimination, adoption and child care, domestic partner benefits, and the freedom to marry. In some jurisdictions, the legal changes are widespread; in others, however, there has been little or no change” (Harvey & Allard, 2009, p. 211). How Society Views LGBT

Society has discriminated against the LGBT community for a long time, but in most present and recent history acceptance of the LGBT community, they have grown; however, there is still almost complete polarization to how accepted the community is. In a study from the University of Chicago, from 1973, based upon the question of whether or not sexual relations between two adults of the same sex is acceptable, 69.7 percent of the people participating stated it to be completely unacceptable and only 10.7 percent stated it to be completely acceptable (Smith 2011). Where as to the same survey that took place in 2010, 43.5 percent stated homosexual acts to be unacceptable and 40.6 percent stated homosexual relations to be completely acceptable (Smith 2011). Why has there been such a change? Well, the majority of acceptance comes from younger generations being more socially open, as to older generations who have grown into their own opinions already. Another reason is media as stated here “as society has become more accepting of gay people, the media has presented increasingly positive images of gays and lesbians, succeeding generations are raised with more tolerant attitudes (Gossett & Lewis 2008)”

Politics behind Discrimination against the LGBT Community
In a political view, being homosexual has been an extremely large subject that has left the LGBT Community at a constant struggle for equal rights. A major issue the LGBT community faces is the denial of the right to marry and receive the benefits of marriage under state recognition. Due to the balancing of powers that our country is built upon, it is each individual states duty to recognize what it viewed as right or wrong in the state’s community. Unfortunately same-sex marriage has been ban within the vast majority of states within the United States. There are currently only 17 states, which have legalized same-sex marriage (17 States). Same-sex marriage has been a major dispute for ethical righteousness since May 18th, 1970. On that very day two men in Minnesota applied for a marriage license only to be denied the right to marry by the state judge.

The two men had come to the decision to sue the judge taking the case all the way up to Supreme Court only to be denied the right to marry. This case “Baker v. Nelson” has been used since then to block efforts for marriage equality (Gay Marriage). Another obstacle to equality is the adoption law. There are many states that require strict qualifications to adopt, and adoption is currently legal within 21 states and D.C. (Parenting Laws). Under national law there are currently anti-discrimination laws within housing, employment, hate crimes, conjugal visits, and military service. Discrimination toward the gay community is still very present, but it is slowly being diminished by the strong efforts of the gay community Interesting fact: Under FDA policy on blood donations, men who have had sex with other men may not donate blood (U.S. Food and Drug). Existing or Proposed Solutions of Differing Groups

The Lesbian Gay Bisexual & Transgender Project (LGBT) works for an America free of discrimination based on sexual orientation and gender identity. The American Civil Liberties Union (ACLU) LGBT Project was created to provide a society where LGBT people can enjoy the constitutional rights of privacy, equality, personal autonomy, and freedom of expression and association (aclu.org/lbgt-rights). The ACLU founded the LGBT project in 1986 with a strategy believing that fighting for society we want not only means changing the viewpoint of judges and government officials, but changing the way society looks at the LGBT community (aclu.org/lbgt-rights). In order to stop discrimination, the ACLU looks to change the law and also convince Americans gender identity and sexual orientation discrimination is wrong.

There are five areas at which the ACLU carry out this work: Parenting, Youth and Schools, Basic Rights and Liberties, Relationships and Marriage, and Transgender Discrimination (aclu.org/lbgt-rights). Currently the ACLU presents more LGBT cases and advocacy initiatives than any other national organization. With connections to legislatures and courts in all states, the ACLU is the only organization making progress in both the court of law and public opinion. How Other Countries View the Issue

Internationally, the issue of gay marriage can be a taboo topic, and often the endorsement and safeguard of homosexual couples’ rights are repudiated by political and customary pressures. Nonetheless, the legalization of gay marriage is gaining momentum as other countries are setting precedents by actively pursuing the rights of homosexual couples that want to marry by changing laws and widening traditional views. Currently, 15 countries have legitimatized gay marriage; two of those with laws that have not yet been sanctioned (Freedom to Marry, 2013). Gay marriage is legitimate, with all marriage rights comprehensive, in the Netherlands, Canada, Belgium, Sweden, South Africa, Spain, Norway, Portugal, Iceland, Argentina, France, Denmark, and Brazil. New Zealand and Uruguay have legalized gay marriage, but it has yet to become ordained. In addition to these countries, United States and Mexico have only legalized gay marriage and all marriage privileges inclusive, in certain regions with many other regions failing to recognize gay marriage (Freedom to Marry, 2013).

Moreover, in some nations where gay marriage is recognized and legalized, homosexual couples who wish to marry must meet the requirements set forth by the country’s government. Spain and the Netherlands require that at least one partner have legal citizenship of their country or become a resident if they wish to marry there (Moore, 2005). In the ongoing international battle to afford same-sex marriages the same rights as traditional marriages, there are countries that fail to recognize gay marriages as they are not accepted as upright or legal, but do lend some protections of a civil union. Ecuador, Finland, Germany, Greenland, Hungary, Ireland, Sweden, and the United Kingdom are just a few countries where rights of a union are recognized, but gay marriage is not.

Other Countries
Attitudes about homosexuality vary. The LGBT has faced discrimination in many other countries. In the Asia-Pacific, the majority of ASEAN nations and East Asian countries feel that homosexuality should be rejected. In neighboring China (the world’s most populous country) more than half of the population rejects it. In India (the second most populous country), the national Supreme Court recently re-instated a law criminalizing same-sex acts. Also, in 38 of 54 countries on the African continent, being gay is a crime. In developing countries throughout the world, homophobia and intolerance is the norm. Even Poland, once part of the former Soviet bloc and now a EU member state, favors rejection. Not very long ago, a law was passed in Russia banning gay propaganda.

The law in effect makes it illegal to equate straight and gay relationships, as well as the distribution of material on gay rights. It also introduces fines for individuals and media groups found guilty of breaking the law, as well as special fines for foreigners. More recently, we witnessed the bashing lesbian, gay bi-sexual and transsexual people during the 2014 Winter Olympics in Sochi. Many found it very disappointing that Russia was chosen as a host county despite the opposition of Russia’s treatment of its LGBT community. Compromise/Solutions

Over the years, lesbian, gay, bisexual and transgender individuals in the Unites States have been classified in a negative way. This group of individuals has experienced legal issues and challenges because of society’s opinion on how they should live and the rights that they should have. Unfortunately, LGBT not only faces challenges in the United States, but across the world, as well. Information was presented on legal issues that have occurred. Though it has been difficult, the LGBT supporters have lobbied for equal rights and recognition. The group has made progress throughout the United States, but there are still concerns worldwide. Although there is still much work to be done to give this group the respect they deserve, continuing to educate society on the importance of diversity and equality will be essential in living harmoniously. 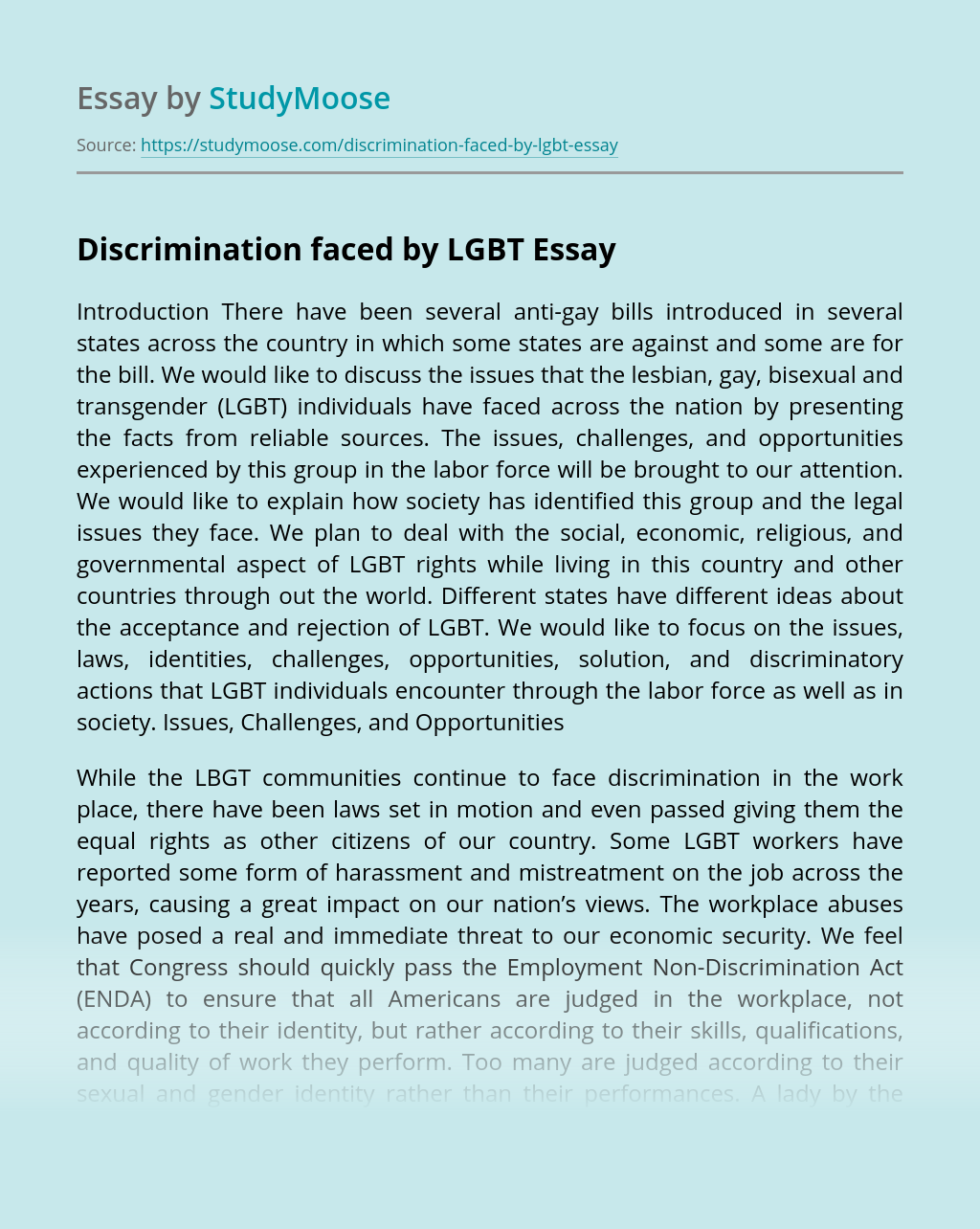 Don’t waste time
Get a verified writer to help you with Discrimination faced by LGBT
Hire verified writer
$35.80 for a 2-page paper
Stay Safe, Stay Original