Bullying is a problem that has existed in schools for some time. However, it has become a serious problem as in the last years the number of lethal outcomes has increased due to the fact that bullying victims have increased the number of attempted suicides. The figures among members of the LGBTQ community are even higher as they are the target population that are most at risk. LGBTQ teens are afraid for their health and well-being due to the fact that they are being harassed and assaulted in schools.

Don't use plagiarized sources. Get your custom essay on
“ LGBT Community, Bullying and Suicide ”
Get custom paper
NEW! smart matching with writer

Scholars have claimed that previously members of staff and teachers did not consider it their top priority to change the situation, however, the attitude and perception of the situation changed in the last years. Today bullying of LGBTQ community members is still a significant threat to the lives of separate individuals and the community as a whole. This is manifested not only by the suicide rates but also the aggressiveness level within the community.

If one has never experienced systematic harassment or other violence from a person who has more power or influence, then it may seem that bullying is a trifle. However, according to a report by the US Department of Education, one in four children between the ages of 12 and 18 was a victim of bullying in the last school year. All children sooner or later face bullying: either as a victim, or as an offender, or as a witness, both online and in real life. All these roles have a devastating effect on the child’s personality.

The problem of bulging LGBTQ teens is even more acute.

Bullying is not just anger and meanness. This is unconscious aggressive behavior arising from real or perceived power imbalances. Bullying tends to repeat itself and leaves the victim in a state of fear and stress. Bullying has a similar effect on those who witness the events. If the children quarreled or even called someone, or once expelled someone ‘from their team’, then this is not classified as a bullying. But if a culture of unpunished violence is formed in the children’s team, then this can create in them a sense of the permissibility of humiliating others.

Will Hall (2007) has conducted a meta-study in order to determine the scope of the problem as well as the existing legal means this problem can be overcome. As a result, the scholar determined that LGBTQ teens were four times as likely to be threatened with a weapon of some sort. Half of the LGBTQ students had their property deliberately damaged or even stolen. Besides, almost 1/5 of the LQBTQ sample openly confirmed that they were being physically assaulted and beaten. However, Hall also claims that in various studies there is a range from 10% to 17% of LGBTQ students who claim to have experienced homophobic and discriminatory remarks being said by school staff and teachers.

Yet it must be the teachers, who see the development of the situation and are the first to react to problems within the teen environment with regards to bullying. Kolbert, Crothers, Bundick, Wells, Buzgon, Berbary, Simpson and Senko (2015) have even conducted a study as to how teachers perceive the problem of LGBTQ bullying within their school environment. The results of the study showed that there is a positive correlation between the demonstration of staff supportiveness towards all of their students regardless of the sexual orientation and the LGBTQ student bullying frequency. This means that the higher rate of derogatory language use towards LGBTQ students was noted the more supportive was the staff of these children. Of course, to some extent, this is regulated by legal norms both on state and national level. Each school has a designated anti-bullying policy, however, not all staff members know about it. Thus, according to Kolbert et al. (2015), those staff members who were not aware of the presence of such a program reported higher rates of bullying specifically aimed at LGBTQ students, whereas those who knew of the existence of such programs. Since the Hall (2007) study there apparently has been a shift in perception of the LGBTQ community and the increase of tolerance within the community itself. However, if the older population has grown more tolerant of the LGBTQ community members, teens have not and bullying continues to thrive.

Evans and Chapman (2014) agree that the amount of bullying remains rather high in the US. However, scholars point out that unfortunately there has been a little study on the nature of bullying behavior. Having analyzed a sample of 3379 individuals within a diverse ethnic community the scholars determined that there appear to be three classes of youth, namely those who experience bullying victimization, those who experience social and emotional bullying, and those who are being teased gay, lesbian, or queer. Thus, the findings of these scholars show that adherence to the LGBTQ community has become a form of teasing making the actual LGBTQ teens vulnerable and in need of support in the face of the other children who with their increasingly enraging behavior are making the lives of others hard.

David Campos (2017) points out that there are varied forms of bullying. However, with the advent of technology cyberbullying is also picking up the pace. According to Campos (2017), almost 1/3 of the individual high school students get bullied throughout the year, whereas 7% of the LGBTQ teen community members are bullied every day. This leads to the fact that children claim to feel unsafe in the school environment with 58% fearing the attitude of others because of their same-sex orientation, whereas another 43% claimed it was unsafe for them due to their gender expression. In terms of types of bullying, almost 85% have been verbally harassed, 27% were harassed physically, whereas 13% were physically assaulted.

Hall (2007) pointed out that bullying and harassment can have some negative consequences. For one, the academic level of bullied children drops significantly. At the same time, a feeling of loneliness, isolation, and rejection sets in. This rejection causes depression which leads to a potential suicide attempt. Suicide is the second most common cause of death among American teens. Almost 29% of LGBTQ teens in the United States have ever tried to commit suicide; among heterosexual teenagers, this figure is 6%. The data were collected by Raifman, Moscoe, Austin, and McConnell (2017) in more than 700,000 schools that participated in the state program to study the risk behavior of adolescents from 1999 to 2015. In the last year of research, the US Supreme Court legalized same-sex marriage. This study analyzed the reports of about 230,000 students who reported being gay, lesbian or bisexual (transgender teenagers were not collected). The questionnaire included questions about smoking, alcohol and drug use, as well as suicide attempts. In 32 states that legalized same-sex marriage earlier than others, the number of suicide attempts decreased by 7% among all students and by 14% among LGBT teens. In states that have not legalized same-sex marriage, statistics on suicide among adolescents has not changed.

Ernould (2012) has claimed that the problem of bullying is a difficult one to render a solution for. Despite the fact that the US community has become more tolerant, it is still difficult for people to perceive that human relations have evolved and are now on a supra-level of their existence. Ernould (2012) focuses on the need for mandatory conduct interventions at schools as a means of bullying prevention. However, not only school interventions are needed. It seems that the whole society must change and become even more tolerant than we already are, in order for children to start feeling safe in the environment that is supposed to shape and teach them how to succeed in life, instead of how to evade a potential bully and survive throughout the day.

Today, when it comes to rights of the LGBT community, for some reason, many people have the idea that LGBTQ people are second sort people who are outrageous in their behavior. And although these arguments have nothing to do with reality, they are quite deeply entrenched in the public consciousness. Nevertheless, based on life experience and legal regulation of homosexual relations, it can be concluded that LGBTQ people are not only deprived of the right to openly express their feelings (due to overwhelming public condemnation), but also feel a threat to their property status and even health. This is much more evident in the teen community, where the latter is not only bullied and harassed but are quite often physically assaulted. Bullying of the LGBTQ teens is a problem that one has to deal with, otherwise, the number of suicide outcomes will increase. 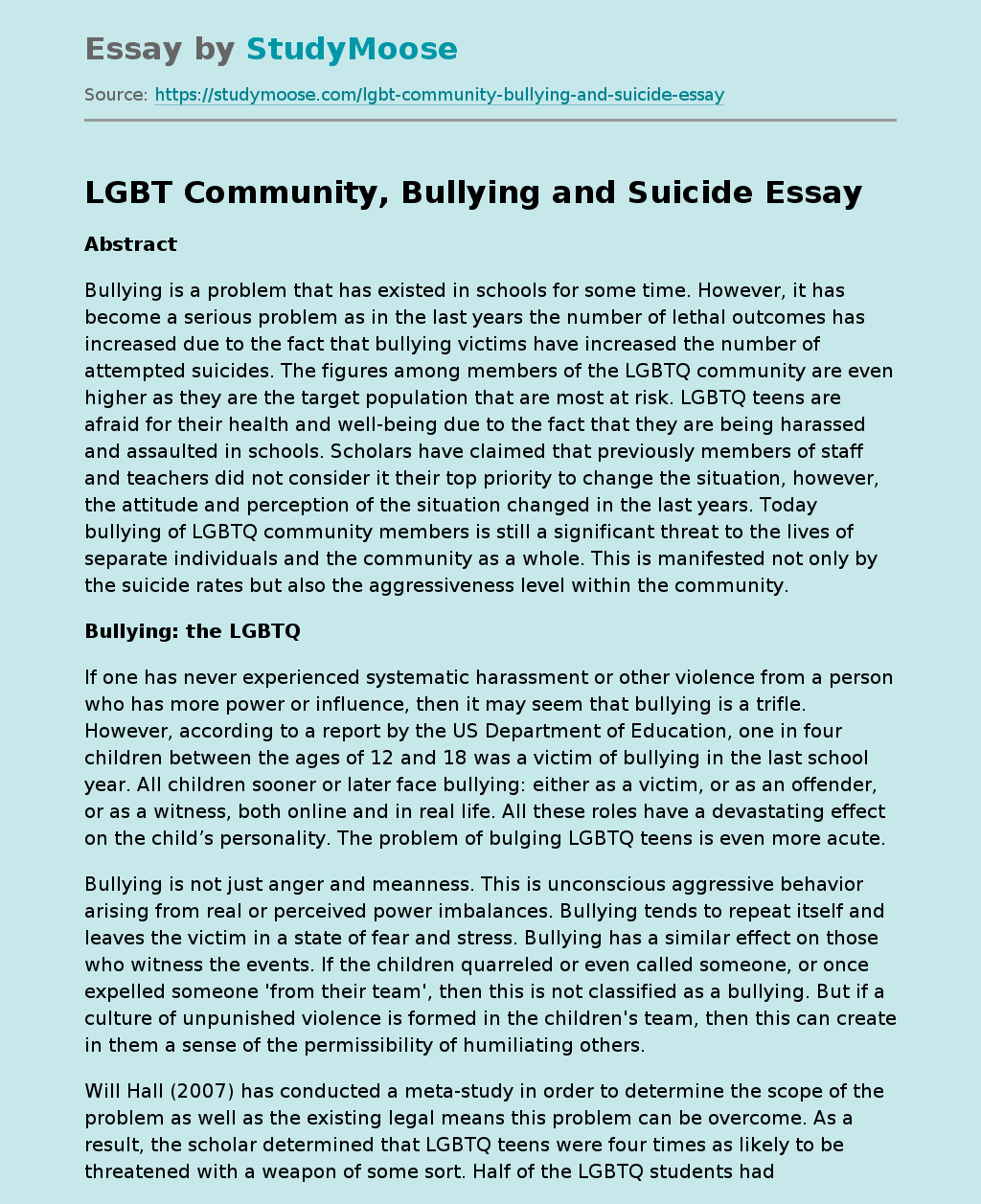