Bullying as One of Reason of Teenage Suicide

Have you ever thought to yourself why all over the news you see people dying of suicide? This has a strong connection to people getting bullied. A whopping fourteen percent of high schoolers have considered suicide (“bullying statistics”, 2015). Many people consider suicide because they feel trapped, and all alone due to others bullying them. People who are getting bullied in any way, shape, or form are likely to choose suicide (“bullying statistics”, 2015). There is a very strong connection between bullying and suicide according to Yale University.

Don't use plagiarized sources. Get your custom essay on
“ Bullying as One of Reason of Teenage Suicide ”
Get custom paper
NEW! smart matching with writer

They researched, “Bully victims are between two to nine times more likely to consider suicide” (“bullying statistics”, 2015). These percentages are very high even more now due to the advancements of social media, and new technology coming out in the form of cyberbullying. Most of the bullying that bullies do is to make them look good, or them taking their anger out on others.

Before we can talk about bullying statistics to suicide percentages, we need to understand the definition of bullying.

According to dictionary.com bullying means, “A blustering, quarrelsome, overbearing person who habitually badgers and intimidates smaller or weaker people” (“Dictionary.com”, unknown date of publication). In other simple terms, bullying is belittling someone or hurting someone, physically or mentally, even if they are in the right doing, and does all of this with free will, constantly. There are also many types of bullying; cyberbullying, physical bullying, verbal bullying, indirect bullying, and direct bullying.

Cyberbullying is when someone is making fun of, shaming, and posting bad things about a person online.

Bullying is a serious problem to the point that many consider or do commit suicide. “Suicide is the third leading cause of death among young people – 4,400 per year” (“ArkofHopeForChildren.org”, 2017). That much young people choose suicide mostly due to bullying. Fourteen percent of high school students consider suicide, what may not look like a lot, but it actually is. Seven percent of high school students attempt to commit suicide (“ArkofHopeForChildren.org”, 2017). All types of bullying in the previous paragraph are one of the main reasons people choose to commit suicide. The most common type of bullying today is cyberbullying. This type of bullying is what causes most people to commit suicide because it’s the most common form of bullying found on everyday social media apps.

The most common group to get bullied according to stopbullying.gov is the LGBTQ (lesbian, gay, bisexual, transgender, queer). This group is most targeted because of the difference of sexual attraction, or change of gender. There are also many reasons people get bullied (risk factors). There are certain aspects that can signal to a person getting bullied. These aspects are being considered different, weak or unable to defend themselves, have low confidence levels, not “cool” or popular to others, and not getting along with others (stopbullying.gov, “Who is at risk?”, 2018). These are some risk factors (signs of bullying), and who is getting targeted.

Now that we have learned the serious and harsh reality of bullying, suicide, and who is getting targeted, lets now talk about how to prevent it. There are many ways to help stop bullying, but these are some ways you can help according to nea.org. Nea.org states that there are ten specific ways you can help stop bullying. They are to pay attention, don’t ignore it, when you see something- do something, remain calm, deal with students individually, don’t make them apologize on the spot, hold bystanders accountable, listen and don’t pre-judge, get appropriate professional help, and train to know bullying situations (nea.org, “10 steps to stop and prevent bullying”, unknown date of publication). All of these steps are helpful to prevent bullying, and in severe cases, suicide. The most important steps would be to listen and to not ignore the signs. You need to pay attention to signs, no matter how little they are, still check if the person is ok. Ignoring someone who is getting bullied is just as bad as the person bullying them. That is why bystanders should be held accountable just like nea.org said. These are the steps you need to take to help others who are getting bullied.

The way I feel about bullying is that it is absolutely unacceptable. I can understand joking around that’s one thing, but to make someone feel that way even to the point of thinking that they are not good enough to live. That is a feeling that no person should ever have to feel. No matter what race, sexuality, popularity, looks, no matter how different you may be. In my opinion, and I hope everyone else, is that there shouldn’t be any bullying in this world. Also, in my opinion, I think that people who are bullies should still be punished, but they should understand how much pain they put the person they bullied through. You should also try to look out for bullying and when you see it please don’t ignore it. Help that person, and make sure they are ok. This is my opinion on bullying.

In conclusion, bullying is one of the main reason teenagers commit suicide. Bullying is a serious issue that comes in many shapes and forms. Bullying is mostly targeted at certain groups types main due to differences that the bullies use to make fun of them. Bullying mainly consists of cyberbullying, physical bullying, verbal bullying, indirect bullying, and direct bullying. Bullying is preventable, but it takes effort with ten main steps, that I think is accurate, from nea.org. There are definitely more specific ways, but these ways can help a bully victim. With this essay, I hope you now understand a little or a lot more about the cruel reality of bullying, and the crucial steps to help prevent it.

Bullying as One of Reason of Teenage Suicide. (2021, Apr 20). Retrieved from http://studymoose.com/bullying-as-one-of-reason-of-teenage-suicide-essay 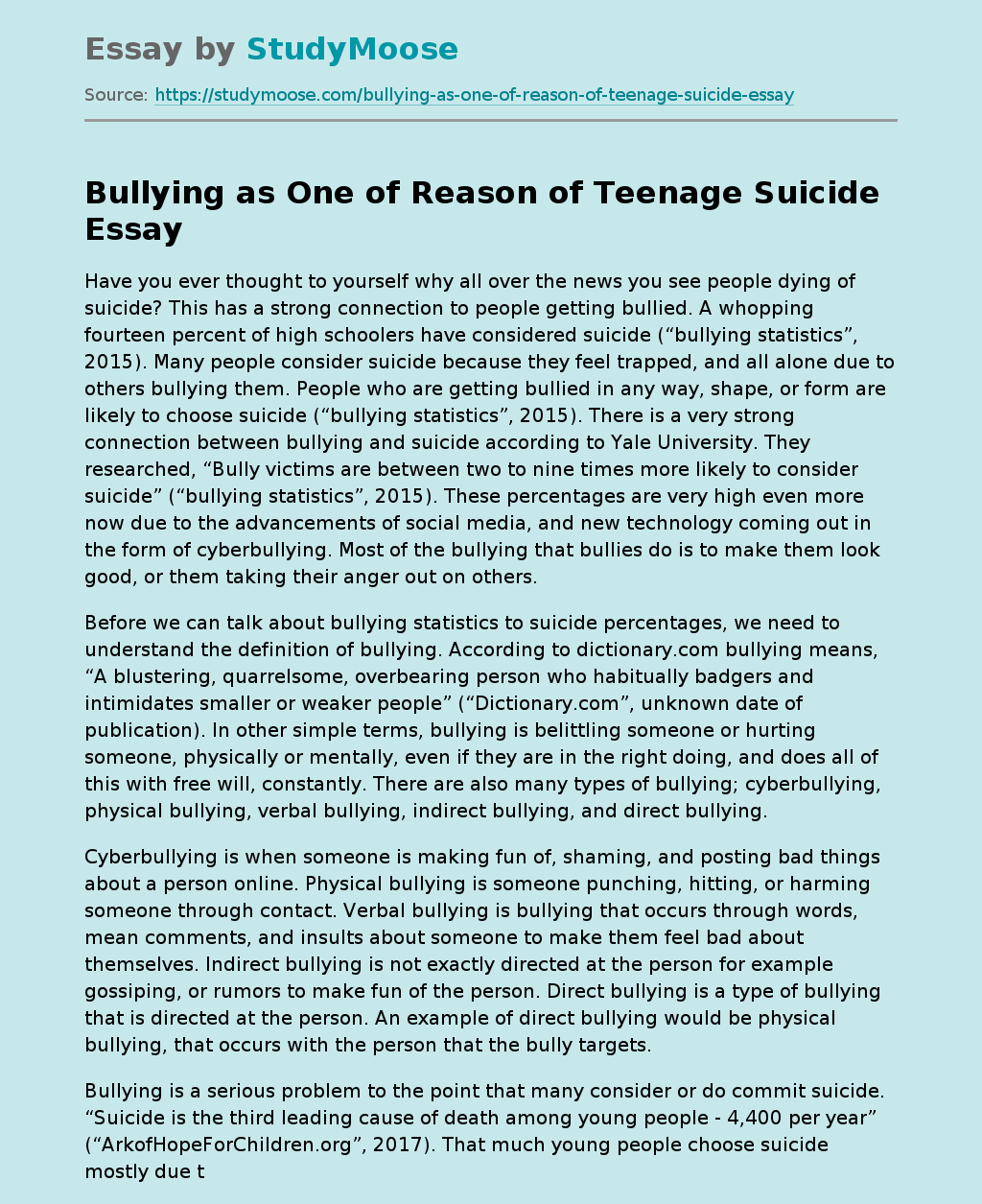