Challenges Faced by the Print Media

Conventional wisdom in the media industry holds that existing, established forms of media adapt to new and emerging forms. For example, radio adapted to the emergence of television rather than simply fading away. The emergence of the Internet and the plethora of information available, however, have led many to question the conventional view. Media executives and scholars agree that newspapers, magazines and other forms of print media face serious challenges in terms of readers, revenue and even their existence.

Don't use plagiarized sources.
Get Your Custom Essay on Challenges Faced by the Print Media Just from $13,9/Page

Declining Readership •Readership of many forms of print media, especially newspapers, has been declining for years, and the Internet may have only accelerated this trend. Further, newspapers have largely failed to reach the younger, technologically savvy generations. The Press Council of Australia, in its 2006 report on the State of the News Print Media, reported that people over the age of 50 comprise nearly half of the readers of Australia’s newspapers. In the United States, the Pew Research Center for People and the Press, a nationally known public opinion research firm, reported in 2008 that the Internet surpassed newspapers as a news source.

Television, however, remained the most popular source of national and world news. Lost Revenues

•As the print media lose readers, shrinking their circulation figures, it becomes increasingly difficult for newspapers, magazines and other print outlets to sell the advertising space that provides the bulk of their revenues. Media consultant Jack Myers, writing for the online Huffington Post, reported that newspaper ad revenues plunged an estimated 40 percent since 2001, based on projected revenues for 2010. Further, Myers reported that magazine advertising revenues fell between 12 and 15 percent in 2008. Even the “Yellow Pages” telephone directories are not immune from this trend, as Myers projected declines in their ad revenues, as well.

Long-Term Survival •Declining advertising revenues have threatened the very existence of many print media outlets, especially newspapers. As revenues fall, many newspapers have slashed their editorial staffs and shuttered news bureaus. Some print media outlets have even ceased operations. The trend may continue, with more newspapers and other print publications going out of business. The Press Council of Australia cited a 2006 report by the London-based magazine “The Economist,” which predicted the extinction of at least some of the United Kingdom’s newspapers. The worrying trends and threats to their viability have many print media executives scrambling to develop news business models and methods to adapt to and prosper in this new media environment. Newspapers have increased their online presence, according to a survey of news media consumption by Pew Research; however, growth online has not offset newspapers’ losses in print readership.

Challenges Faced by the Print Media. (2016, Nov 23). Retrieved from https://studymoose.com/challenges-faced-by-the-print-media-essay 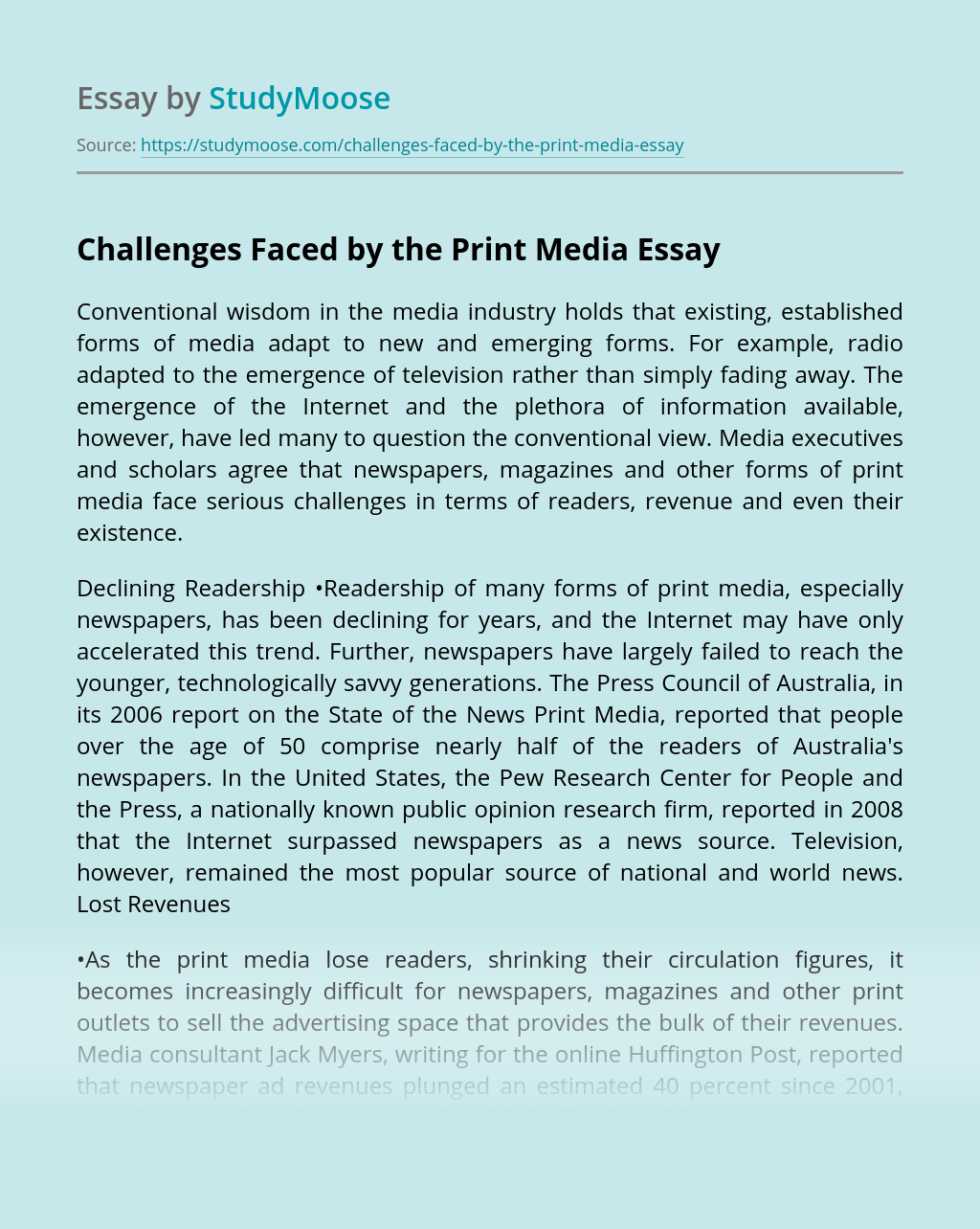 Get Essay
The Meaning of The Following Terms: Discrimination

Rate this post Explain When you mention the word “race”, people will automatically define it as another species, someone who is totally different from themselves. What they don’t realise is that apart from maybe the skin colour, hair texture, facial features and one or two other differences, we are all the same genetically. Human beings...

Rate this post 1. Blogging Blogging can be an online business where you can start anywhere as long as you have an Internet connection. Hence, you can start it while still working abroad. Blogging involves creating a blog or a number of blogs which regularly publish content that are targeted to broad or specific audience....

Introduction When designing a space there are many things to

Rate this post Introduction: When designing a space there are many things to be considered. One thing that get overlooked again and again is lighting in interior designing. Lighting is tremendously imperative when it comes to interior design. Light can make and break a space. Suppose if we have a modern kitchen we don’t want...