As designers we critically think about what we want our creations to be, what they look like and most importantly what they are inspired by. The shift and movement away from modernity in western society has become a significant change over the past century, notions of critical theory, art, fashion, literature, and philosophy has changed radically. What has manifested from this is the shift of post modernity/postmodern a complex term that finding a simplified explanation is very difficult to find.

This essay will analyse and question what is post modernism and how it developed into the new period.

How did fashion grow and adapt to post modernism. And analyse the ideas of Fashion designer Issey Miyake in relation to postmodern practice. Postmodernism is a subjective theory that can be broadened and vary from hypermodernity to post-structuralism. In short form, in a literal form, postmodernism is the movement away from modernism. It is evident that modernism was a failing enterprise in the later 20th century as it was conceptualised to be corrupt, flawed and oppressive (Witcombe, 2000).

Modernism was the movement from Agrarianism towards capitalism & industrialism and other various movements however deviate away from radition and medieval practices (Barker, 2005). At the end of modernism the world was then entering a new period for instance the previous periods such as the rococo period, baroque period, and Elizabethan period. Therefore, this new period was called ‘postmodern’ which began in late 21s century around the time when pop culture became popular which was in the 60’s (Witcombe, 2000).

The postmodern term can be used in more then one context and in a variety of ways. Witcombe (2000) characterized that “…some would say it means anti-modern; and for others it was just a revision of modernist’s premises”.

Based on current this current decade it can also be used to describe society as Bernard explains, “Postmodernity is a globalizing, post industrial world of media, communication and information systems. It is organized on the basis of a market-orientated world of consumption rather than work and production…it is a world of culture in which tradition, consensual values…universal beliefs and standards have been challenged, undermined and rejected for heterogeneity, differentiation and difference ” Bernard, 2007 (as cited in Diehl, 2009)

Postmodernism is visually approached from a different viewpoint whilst also changing what normality is. Which becomes experimental, irrelevant and unexpected (Dinga, 2012). Postmodernism can be seen through expression and appropriation. The idea of re-working, re-using, recording, critiquing and re-ordering to create something new that is then reproduced. (Bernal, 2013) The idea of intertextuality can now be introduced at this stage (Bernal, 2013) The tenure of postmodernism can be applied to fashion and vary from a number f characteristics dating back to the late 20th century and the early 21st century, more so much recent fashions are considered to be postmodern, designers such as Comes de Garcon, Alexander McQueen, and Vivian Westwood are prime examples of this (Diehl, 2009). These fashions of today prevail styles that are considered to be an upheaval of decorative art and architecture, its aesthetics reflect on current events, movements, society and focuses on the developing culture and behavior of the world today, This also shows the societal distrust of the precepts of modernism (Diehl, 2009).

Fashion was pushed away from the ideology that was subjected to a statement of elegance, reinforced by quality and exclusivity, addressing ones statues (reference). This notion of hierarchy was soon to be a primitive concept as fashion responded to pop art during the 1960’s which was an important influence to postmodernism at the time (Diehl, 2009). This pop art movement conjured innovation such as the paper dress, and the idea of a throw away aesthetic.

A relationship between fashion and fine art was important; at the time of the 1980’s in particular fashion designers where playing with the juxtapositions of creating garments that had a sarcastic meaning. An example of this is Gianni Versace’s signature Greek prints he used in his 1992 collection, which where symbols from the baroque period an the image below shows this (Diehl, 2009). Fashions focus on youth and subculture is important, and is an expression of postmodernism (Diehl, 2009).

Subculture catered to the minority in mainstream such as the hippies in the America and the punks in Britain, they where cultures that where conjured up from society and that there identity and practices where always outside of mainstream. It was all about life choices such as music, use of drugs and rebellion (Diehl, 2009). One important part of subculture was identity and how they where presenting themselves as it conceptualized there own unique style; because of growth and popularity this visual identity lost its truculent meaning and became an impartial fashion fade (Diehl, 2009).

Mainstream Fashion adopted this notion of subculture visually which worked it self backwards, or taking the unconventional and turning it into the conventional. This idea of using subcultures as a reference of inspiration for designers or the ideology of taking a concept from the past has been a frequent technique and has been widely used over the past two decades (Oatly, n. d). An example is seen during the 1980’s in London when style aesthetics had the fastest turnover of the decade. Styles influenced by new romantics to Buffalo Gals.

Styles that where taking the streets of London promoting subculture and approach to innovative style of the time (ref). This sight of new design and innovation of the common minority was seen to be a distinction between the notion of ‘street’ and ‘designer’. One particular Designer that would be considered as the emperor of postmodern fashion is Issey Miyake. Miyake was the forefront of bringing Japanese fashion to Paris in the 70s and 1980’s and was a role model of other Japanese designers such as Yogi Yamomoto and Rei Kawakubo (ref).

As they where becoming established brands these three designers became known as the ‘ Japanese Avant-Garde Fashion ‘ (ref). This notion of avant-garde is a term used to describe artists that reject mainstream society, conventional thinking, middle class life-style and seditious values, Miyake was not a man of traditions and was not challenged by conformity, his ideas and concepts where from a open minded way of thinking which coined a new innovation and fresh look to western fashion (ref). Miyake characterized his own style as did Kawakubo and Yamomoto as their aesthetics where very distinct compared to other fashion houses of the time.

Kawamura (2004) suggested there style was created with ‘ …monochromatic, asymmetrical and baggy looks’. Miyake started his career in japan and travelled to Paris to study tailoring and dressmaking at l’Ecole de la Chambre Syndicale de Couture for a year and then to work with couturiers such as Hubert de Givenchy and Guy Laroche and also had experience working in New York with American designer Geoffrey Beene (ref). Miyake’s success in his own brand started in Bloomingdales, buyers where impressed with his work and was offered a small corner in their store (ref).

As miyake was becoming the forefront in fashion at the time so was the shift of post-modernism his ideas and conceptualized aesthetics; visually as a designer it was the start of the interpretation of postmodernism. He created Designs that where ‘…breaking the boundary between west and east, fashion and anti-fashion, Modern and anti-modern’-Kawamura (2004). Furthermore this was the beginning of postmodern at its best redefining western clothing with in itself introduction of new silhouettes round, large, straight cut, loose and off the body with minimal detail these new proportions where seen as innovative at the time. 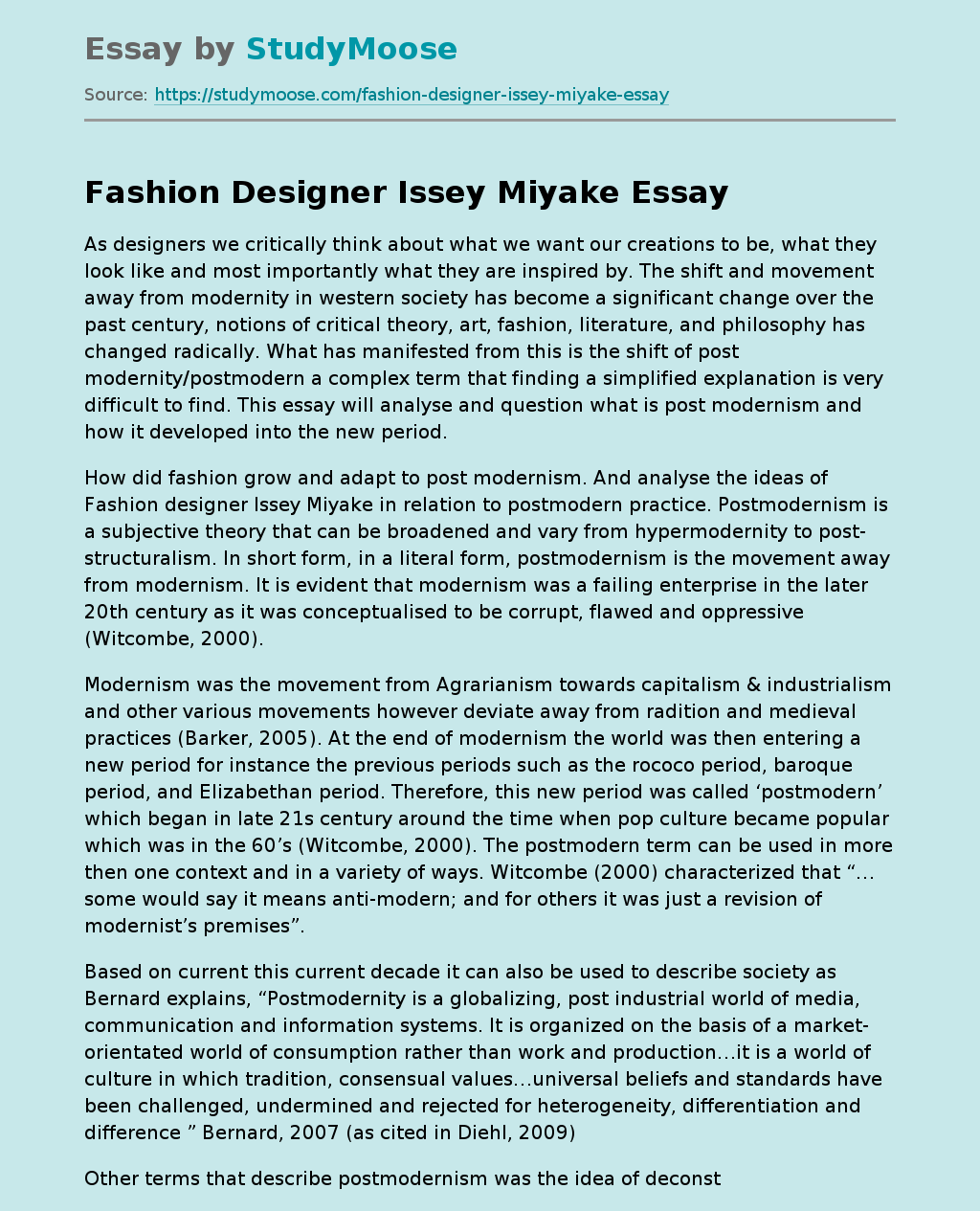