I disagree with the following statement: “Parents should have the right to select specific characteristics in their children”.”

I strongly disagree with the above statement as when you choose to become a parent you should be ready to love a child unconditionally. You should not get the right to pick specific characteristics in your children, God created us all to be special in our own way and how he wants us to be. He knows what is right for us so why would you want to change what he has created.

Don't use plagiarized sources. Get your custom essay on
“ View Designer Babies ”
Get custom paper
NEW! smart matching with writer

He is our lord always and we should not take creation into our own hands.

As parents you should always be telling your children to never change their selves for anyone as they are special in their own way. By changing yourself you are saying you are not happy with the lord’s choices for us. When you change certain aspects, you are saying you think your personal choices are more important than our lords’ choices.

As parents you want to give your children the best life but using technology it not the best way to do that.

The parties who are affected are the designer babies, their parents, other children in their family, extended family and the doctors and the community but they are affected much less.

Reporter Brandon Keim (published 03/09/09, p 1) reports about a Los Angeles fertility clinic that was offering parents to make the choice about their children’s hair and eye colour. This was met with public outrage. On March 2 the clinic shut the program down.

According to Professor of Molecular biology Marlin Crossley who looks at the limits of genome editing technology. On page 1 it reported that two genetically modified babies had already been born in China, but he didn’t believe that we’d be seeing designer babies soon.

The laws and scientific norms are not preventing genome editing technology from advancing but this has limits that relate to the intrinsic complexity of the human genome. The costs and risks outweigh the benefits at this time.

Genetically modified plants have been shown to be able to produce a lot more food for humans to consume but it is still not known the effects on humans and environments of genetically changing how they are supposed to grow.

Scientists worked on creating genetically modified mice in the 1980’s and animals have been cloned since the 1990’s. The CRISPR babies have not been confirmed by any peer-reviewed publications. Before these reports there had been no credible attempts to genetically modify viable human embryos.

Unwanted side affects of designer babies can only be speculated on at this time, but these can be varied from if the baby doesn’t look like the parents wanted, not the gender they chose, not as smart or talented are they not going to want it?

When thinking about this topic there are serious ethical issues with designer babies. As humans we need to remember that the lord created each of us to be perfect before we grow in our mothers’ wombs. Each of us have our own individual traits. By introducing genetic modification, we are messing with what we are supposed to be. I am concerned we could create a culture of humans creating the so called “perfect child”, made with perfect preconceived ideas of what beauty is, wanting them to be highly intelligent, clever at sports etc. The parents might view “ugliness” as a disability which is terribly sad as everyone is beautiful in their own way. Parents could begin only choosing children of certain genders as it suits their idea of what they want for their family. Parents may also try to stop certain medical conditions from being inherited through generations.

After learning about different opinions about designer babies it is clear that it is an area that is likely to cause a lot of ethical problems. With a biblical prospective we can understand that our lord made us to be a certain way and we shouldn’t be taking choices into our own hands. If we do start making designer babies it is like we believe our thoughts about what is perfection is better than the lords. I completely disagree with allowing designer babies to be made.

NEWS. Janna Thompson. Updated 20 Feb 2019. Gene-edited babies are here, but we need to talk about the unwanted side-effects. Retrieved 20/09/2019. From New York Times. 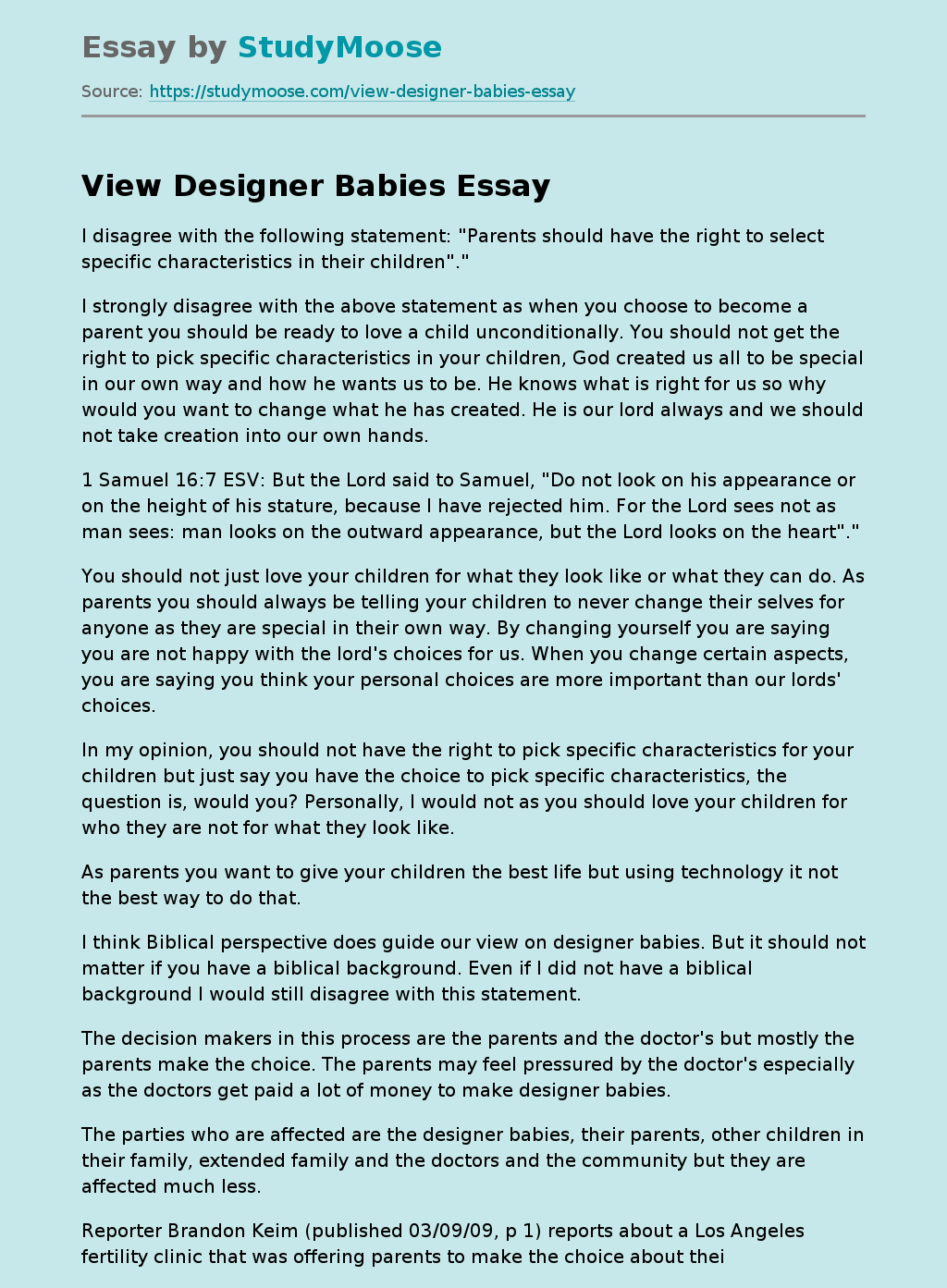