“My Big Fat Greek Wedding” is a romantic comedy that explores cultural differences in a combination of romance and humor. The story revolves around Toula, a thirty-year-old Greek American single woman, who lives with her family in the suburb of Chicago. She works in her family’s business, a restaurant called “Dancing Zorba’s.” Toula is expected to marry from their ethnic background. However, she struggles with her strict father to convince him that she longs for something else in life.

Turn in your highest-quality paper
Get a qualified writer to help you with
“ Family Comedy My Big Fat Greek Wedding ”
Get high-quality paper
NEW! AI matching with writer

They date secretly for a while, before she has the courage to introduce him to her family. Her father is angry over her dating a non-Greek. The overall of the story occurs when both sides try to adjust to each other. This movie relates a lot to the five themes of geography we have been studying.

It relates to location because they live in the suburbs in Chicago, which is a place.

A location is people and places are positioned variously on the Earth’s surface. Also, the father lived in Greece before coming over to the U.S. So therefore, location relates to this movie. It also relates to place, physical and human characteristics distinguish one place from other places. In Greece, you have a very religion type of country. Houses are made to represent the Parthenon, which to the Greeks, is the home of Athena.

Rather in, Chicago, you have very modern houses that don’t symbolize really anything. It relates to relationships within places also because in the movie, the family’s house in Chicago resembles the Parthenon, which you wouldn’t exactly see in such a city. It can also relate to movement because the family is constantly on the phone with each other. With Greeks, you would normally have a huge family, so they are constantly talking on cell phones or driving to each other’s houses to gossip. Also, last but not least, it can relate to region.

The Earth can be divided into regions to help us understand similarities and differences of people and places. For example, Greece and Chicago are divided because they are very two different places. I really enjoyed watching this movie in class. It was very humorous and I learned a lot. Before watching this movie, I didn’t know that when you marry, your job as a woman is to basically cook, clean, and have kids. That shocked me completely. I loved the movie, however it was very predictable. By the way they set up the movie, you could easily tell what was going to happen next. But the overall movie was great. I would definitely recommend this movie to my friends to watch, it’s a very good movie if you just want to have a good laugh. 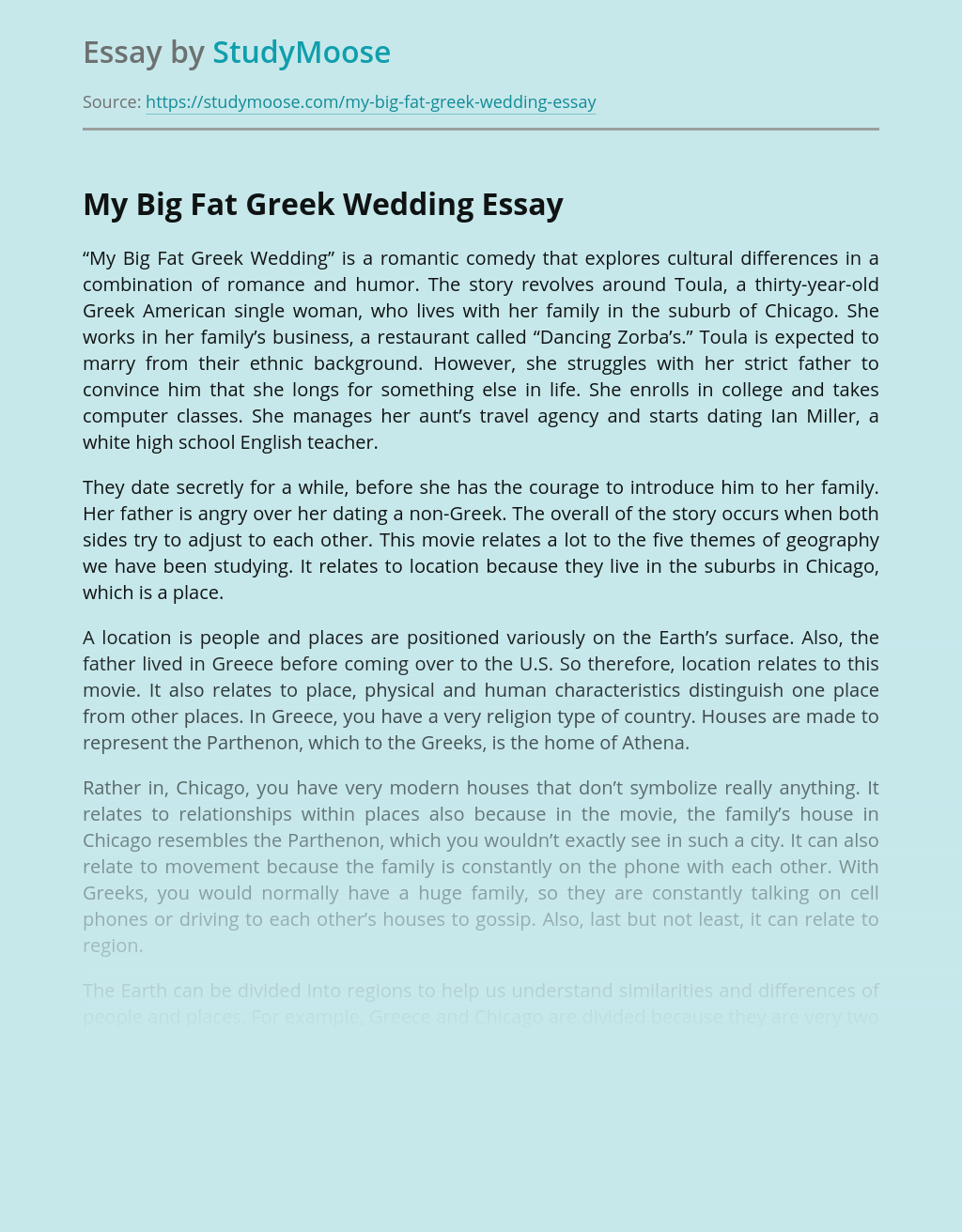 Turn in your highest-quality paper
Get a qualified writer to help you with
“ Family Comedy My Big Fat Greek Wedding ”
Get high-quality paper
Helping students since 2015
Stay Safe, Stay Original