Researchers and theorists have identified both positive and negative effects of hidden curriculum, ranging from more success in the working world due to competitive environments at school (Wren, 1999), to reinforcing the socioeconomic status into which the students were born (Anyon, 1980), to undermining intellectual development (Combleth, 1984).

Don't use plagiarized sources.
Get Your Custom Essay on Factors Affecting Hidden Curriculum Just from $13,9/Page

Because these effects are so pronounced, attention must be paid to recognizing those elements of the learning environment which impact hidden curriculum.

Different teachers have different rules regarding what constitutes acceptable classroom behavior, and these guidelines affect hidden curriculum. In her study, Anyon (1984) also considered classroom behavior. She found that students from upper-class schools were generally allowed to make their own decisions about how best to accomplish their work: they could leave the room when they needed to, they were allowed to get any supplies they needed for themselves, and they were encouraged to ask questions.

Through their guidelines for classroom behavior, teachers in these schools emphasized that students were in charge of their own destiny and must decide for themselves their best course of action (Anyon, 1984). One of the negative consequences of the hidden curriculum noted by Wren (1999) and Combleth (1984) is that students often blindly accept what is being taught in the official curriculum. Some students, then, are not learning how to question what is being taught, how to look for inconsistencies in theories, and how to think for themselves.

This consequence can result from how teachers ask questions. Questions that require one-word answers would tend to place value on rote memorization of facts and the acceptance of the teacher and textbook as “authority. ” Questions that require short answers responses or questions framed as “why do you think…” would encourage students to think for themselves and engage with the material in a meaningful way. Wren (1999) remarked that school culture has a powerful influence on the hidden curriculum.

For the purposes of his study, he defined culture as the values and symbols that have an effect on students’ and educators’ perceptions of the school environment (p. 593). This culture is manifest in the traditions and rituals of the school that are passed down from generation to generation: pep rallies, graduation ceremonies, the school motto, school policies, yearbooks, school newspapers, and faculty handbooks, to name but a few.

Wren did not examine the effect of school culture on hidden curriculum; rather, he encouraged educators to take note of the presence, or absence, of traditions in their own school and encouraged them to appraise the meanings they imparted on the school community. Loporchio (2007) provided an interesting perspective on the yearbook process in particular, mentioning many elements that affect hidden curriculum: the socialization process between teachers and students outside of the classroom, representations of the entire student body or just a select few individuals, and extracurricular activities and their value.

Combleth (1984) mentioned the segmentation of the school day – with supposedly separate subjects being assigned fixed time periods – as one of the factors affecting hidden curriculum. Though Combleth did not expand on this comment, one could argue that separating subjects as they are traditionally done leads to a compartmentalization of knowledge. Skills and ideas learned in one class are not necessarily used in another.

Though this manner of scheduling is convenient, students are not encouraged to draw links between what they learn in different classes, for example links between historical events and trends in literature. In his book devoted to the subject of tracking and the hidden curriculum, Rosenbaum (1976) argued that tracking is the element that most strongly affects hidden curriculum. Based on their placement in various tracks, students create friends, become involved in extracurricular activities, participate in different types of field trips, and are perceived differently by staff and students.

In the same vein, Combleth (1984) claimed that schools, even though purporting to provide equal opportunity for all students, actually convey the message that some students are more equal than others through their tracking procedures. Curricular inconsistencies can also contribute to hidden curriculum. Combleth (1984) gave an example of a hypothetical text book that highlights freedom of speech as a defining characteristic of political democracy and yet ignores or disparages activities of modern dissenters (p. 30).

This text book sends conflicting messages to the students: Is freedom of speech and the resultant ability to take issue with prevailing hegemonies a value to be lauded or to be denigrated? Chapman (n. d. ) provided many examples of behaviors and objects that reveal gender bias in education: dividing students by gender; praising girls for being neat and quiet; praising boys for thinking independently; regarding assertive behavior from girls as disruptive; using textbooks with gender bias, and interacting with students differently based on their gender, to name but a few.

In all of these instances, teachers and administrators send the message that girls and boys are treated differently, that certain behaviors are not appropriate for girls (or boys), and that girls are unequal to boys. The socialization process is thereby reinforcing gender stereotypes that society at large has striven to eliminate.

These eight factors affecting hidden curriculum touch on different elements of the educational system ranging from classroom experiences and interactions between students and teachers to how administrators set up school scheduling and policy. Teachers and administrators must examine the hidden curriculum particular to their school. Are students being encouraged to live up to their potential? Are societal biases related to gender and socioeconomic status being questioned or reinforced? Are students being prepared for the work environments of their future? 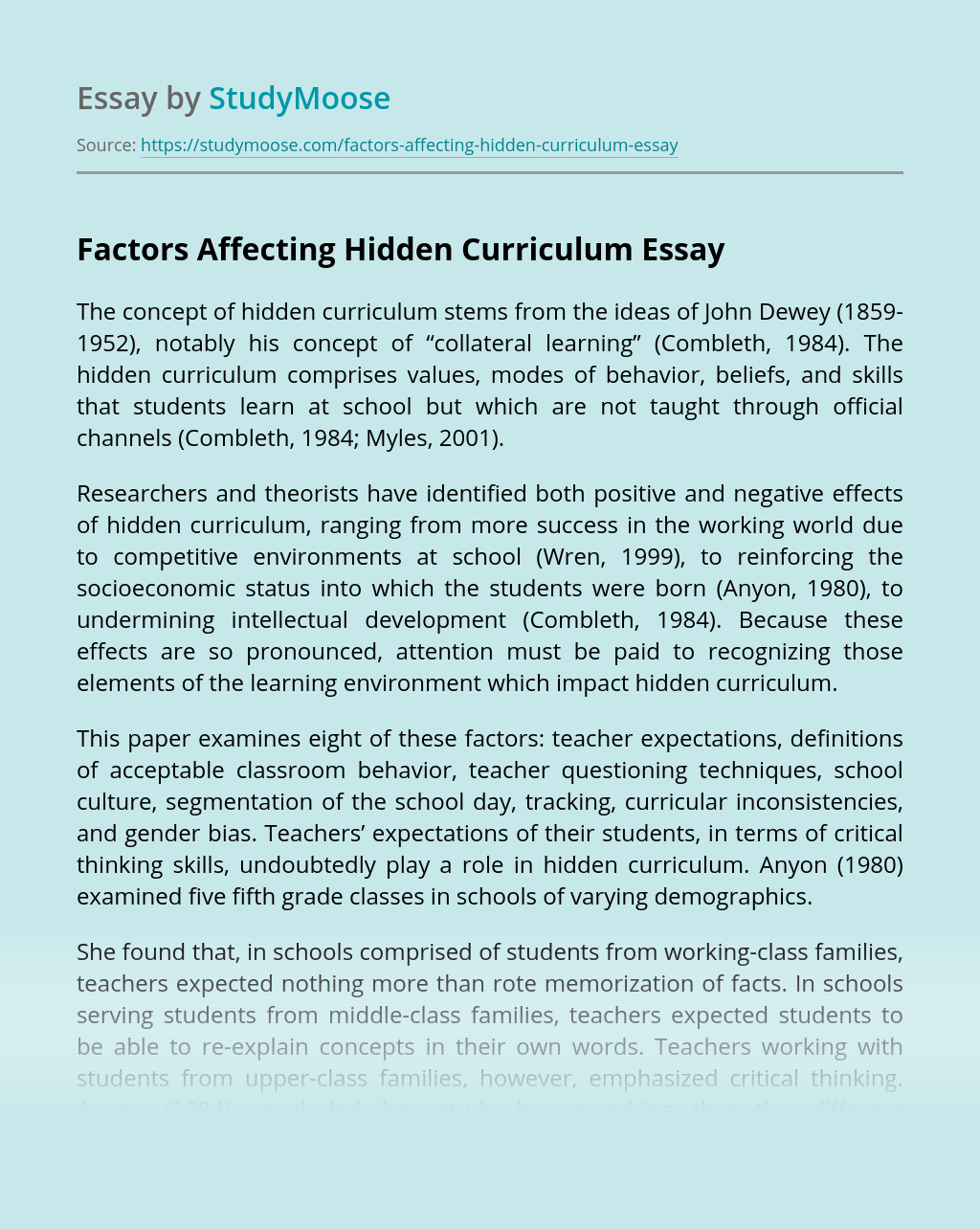 Good morning /afternoon ___________ my name is _________I stand here before you to discuss the reason why I want to be part of the leadership team and hopefully become school captain for this year. (20__}. I realize that it’s a privilege to have the honour but I am confident that I will be a suitable... VIEW ESSAY

Education in its general sense is a form of learning in which knowledge, skills, and habits of a group of people are transferred from one generation to the next through teaching, training, research, or simply through autodidacticism. [1] Generally, it occurs through any experience that has a formative effect on the way one thinks, feels,... VIEW ESSAY

The core meaning of civic education is that it is a subject that promotes civic knowledge, civic skills, civic values and civic dispositions. Civic knowledge is concerned with the content or what citizens out to know, it is thorough familiarization with what civic life constitutes. It is having an understanding about basic principles of democracy,... VIEW ESSAY

I believe technical education is more of an important possession to society than liberal arts instructional fields. Technical schools offer task specific coursework which are usually tasks that are high in demand. When it comes to the cost of your tuition, its way cheaper than a 4 year college. Technical schools cost less than many... VIEW ESSAY

Multicultural Education What is it? Multicultural Education What caused it (Causative factors) Reaction to monocultural approach to education “one size fits all attitude” It is a reaction to Assimilation A+B+C=D The World changed became more heterogeneous as result of various SOCIAL, ECONOMIC & POLITICAL developments USA Segregation patterns (1900-1953) “separate but equal” It was never... VIEW ESSAY