The Factors Affecting The Students Performance in Pakistan

The performance of the students in academics is not only influenced by their own characteristics gifted by the nature but also various factors are involved in these achievements. For the economic and social development of the society, it is necessary to provide our children with the quality education. In recent years, most of the efforts have been made to search out the factors that can affect the student performance (academic). The purpose of this study is to examine and explore those factors that can affect the student academic performance at The Islamia University of Bahawalpur.

Don't use plagiarized sources. Get your custom essay on
“ The Factors Affecting The Students Performance in Pakistan ”
Get custom paper
NEW! smart matching with writer

To obtain the information from students, questionnaires were distributed among them. In this regard, different factors were highlighted. Most important factors were income factor, mother and father education, family size, regularity of teachers, interest created by the teachers in the subject and interest of the students in the co-curricular activities. The Pearson Correlation Coefficient was used to highlight the important factors. The analysis was conducted with the help of the statistical package for social Sciences (SPSS).

There are a large number of universities in Pakistan both private and public that are being run under the guidance of Higher Education Commission Pakistan (HEC). Today, there are total 60 universities both private and public and the Islamia university of Bahawalpur is ranked 13th among them. The Islamia University of Bahawalpur with the total 12000 students and 5 sub campuses is working throughout its region. The students are the most important and valuable assets of the universities.

It is the responsibility of both parents and teachers that they should help and provide the students with all the facilities so that they may be able to become the valuable citizens of the nation. Students are actually the manpower of the nation. It is they who have to build the nation with their skilled hands. If they are equipped with good knowledge and skills they would be able to contribute their part well in the social and economic development of the country. It is also the responsibility of the students that they should give their best efforts to their whole academic career. The employers of the companies and industry need skilled and professional hands in their team. The students should make an effort to be professional in their fields.

In recent years, most of the universities in Pakistan use the CGPA system to evaluate the performance of students. The CGPA shows the average of overall grades of the semesters of the period a student spends in the university. Many universities in the world are using the same criteria for evaluating the academic performance of the students. In Malaysia, teachers evaluate the academic performance of the students by using the CGPA system (Agus and makhul, 2002). Also, in USA student’s academic performance is evaluated by making CGPA. Most of the research has explored many different and important factors that can affect the student’s performance. Most of these factors were income of parents, contribution of parents in the study of their children, the area to which they belong, the educational background of the parents, behaviour of teacher in the class, their contribution in the academic achievements of the students and the importance of co-curricular activities in their educational achievements.

The students who have the strong financial background tend to have a more CGPA in their academic career than the students who have a weak financial background (Aghus and Makhbul 2002). The reason may be the students with weak financial background have to strive hard for their studies as well as their living expenses. Or other reason may be that the rich parents provide their children with all important and necessary facilities for their educational achievements and they in return give good results in their examination (checchi, 2000). Different studies and research have also shown that there is a significant relationship between the parent’s education and student’s performance (Ermisch and Francesconi, 2001). The parent’s education is positively related to the student’s achievements in studies (Durden and Ellis, 1995).

The Aghus and Makhbul in 2001 observed in their study that the mothers have more influence on their children academic achievements and performance. Students’ performance in intermediate examination is positively associated with the mother education (hijazi and Naqvi 2006). The performance in the last examination or semester can be the best source to evaluate the future performance of the students (Aleamoni, 1977). As far as the involvement of the students in the co-curricular activities, are concerned these activities have been observed the most important factor in many studies. Most of the co-curricular activities are very helpful in constructing and empowering the academic achievements of the students, although they do not have direct impact on curricular achievements (Marsh and Kleitman, 2002; Guest and Schneider, 2003).

The people who support the concept of co-curricular activities as helping tool in the academic attainments of the students visualize that these types of activities play an important role in the development of strong character and health, enable the students to communicate effectively, develop the habit of sportsman spirit and teamwork, build up the moral and ethical values among the students and widen the creative thinking. The co-curricular activities have been found positively related to the academic attainments and regular attendances (NCES education policy issues, June 1995).The teacher contribution is also a very important tool in evaluating the performance of the students in the classroom.

Doyle (1985) observed from his study that those teachers are successful in the classrooms that use a variety of techniques and interactive styles to teach as compared to those who use formal methods. Another important factor in this regard can be the region or area to which the students belong. It has been observed from the study conducted by Washbrune (1959) that students who belong to the urban areas give better academic performance as compared to those who come from less populated areas. The reason may be the facilities and resources are available in abundance in the urban areas regarding curricular and co-curricular activities as compared to the rural areas where these facilities are less available. The impact of family size is also very important in the children quality performance. This kind of relationship that exists between the family size and the children’s performance is well known as quantity-quality model (Becker, 1960; Becker and Lewis, 1973; Becker and Tomes, 1979).

The quantity – quality model has shown that the performance of the children especially education achievements have been reduced due to the larger family size (Rosenzweig and Wolpin, 1980; Hanushek, 1992). The role of teacher has its own importance in the academic achievements of the students because it is the teacher who transforms the policies into practical actions which is developed during interaction and collaboration with the students (Afe 2001). The teacher’s teaching role in the learning process of students and in their achievements has been the subject of several research and studies (Adediwura and Tayo 2007, Adu and Olatundun 2007; Lockhead and Komenan 1988; Schacter and Thum 2004; Starr2002).

The information was gathered through the questionnaire. The sampling method used in this regard is the stratified random sampling. There are a total of six faculties in the Islamia University of Bahawalpur which were treated as strata. Then from each faculty three departments were selected randomly and then from each department four classes were selected randomly. On the average there were 40 students in each of the selected classes. Finally from each selected class 10 students were randomly picked and were asked to fill in the questionnaire. The sample was collected from different faculties and the campuses of the university. Out of 720 respondents, 640 questionnaires were treated as adequate and the remaining 80 questionnaires were either not filled properly or were rejected due to inconsistency in the responses. Thus the response rate was 88.88 %. Out of 640 respondents, 68.6% were female and 31.4% were male students. The age of the students was categorized into three groups, almost 27 % were 19-21 year old, 55 % were between 22-25 year old and 18% were above 25 years of age.

DATA ANALYSIS AND INTERPRETATION OF THE RESULTS

SPSS 15.0 was used for the purpose of data analysis. The monthly income of the 45% of parents was observed to be between Rs.10,000 to Rs.20,000 whereas 32% of the parents have their monthly income is more than Rs.20,000 but less than Rs.30,000 and the remaining 23% parents had their monthly income of more than Rs.30,000. The family size was categorized as 3-4, 5-6 and more than 6.The most frequent family size was found to be 5-6. The educational level of the parents was categorized as illiterate, primary level, secondary level and tertiary level (degree, diploma education or above).The study revealed that 15% of the student’s father were illiterate, 21% of the student’s father had only primary level of education where as 37% of the student’s father had secondary level and the remaining 27% had tertiary level of education.

The performance of the students in a previous examination (Intermediate and Bachelors) was observed and it was found that they obtained on the average 61% marks in their previous examination. 57% of the students have said that they have a time schedule of study and they follow that schedule. The average number of hours the students gave to their studies in a day after attending the university classes was found to be 03 hours. A question regarding the time consumed by them in co-curricular activities was asked and the average time consumed was found to be 02 hours per day.

The response to the question that whether university is imparting education effectively, the proportion of students who completely agreed with the statement was 74%, whereas 15% were somewhat agreed and the remaining 11% were disagreed. As far as the regularity of the teachers is concerned 77% of the students were opined that their teachers are regular in taking their classes. A question was also asked to see whether the teachers are developing the interest of students in their subject, 65% of the response was in yes whereas 20% were indecisive and the remaining 15% have said No.

The following are the hypotheses that were tested.

The Factors Affecting The Students Performance in Pakistan. (2016, Jun 16). Retrieved from https://studymoose.com/the-factors-affecting-the-students-performance-in-pakistan-essay 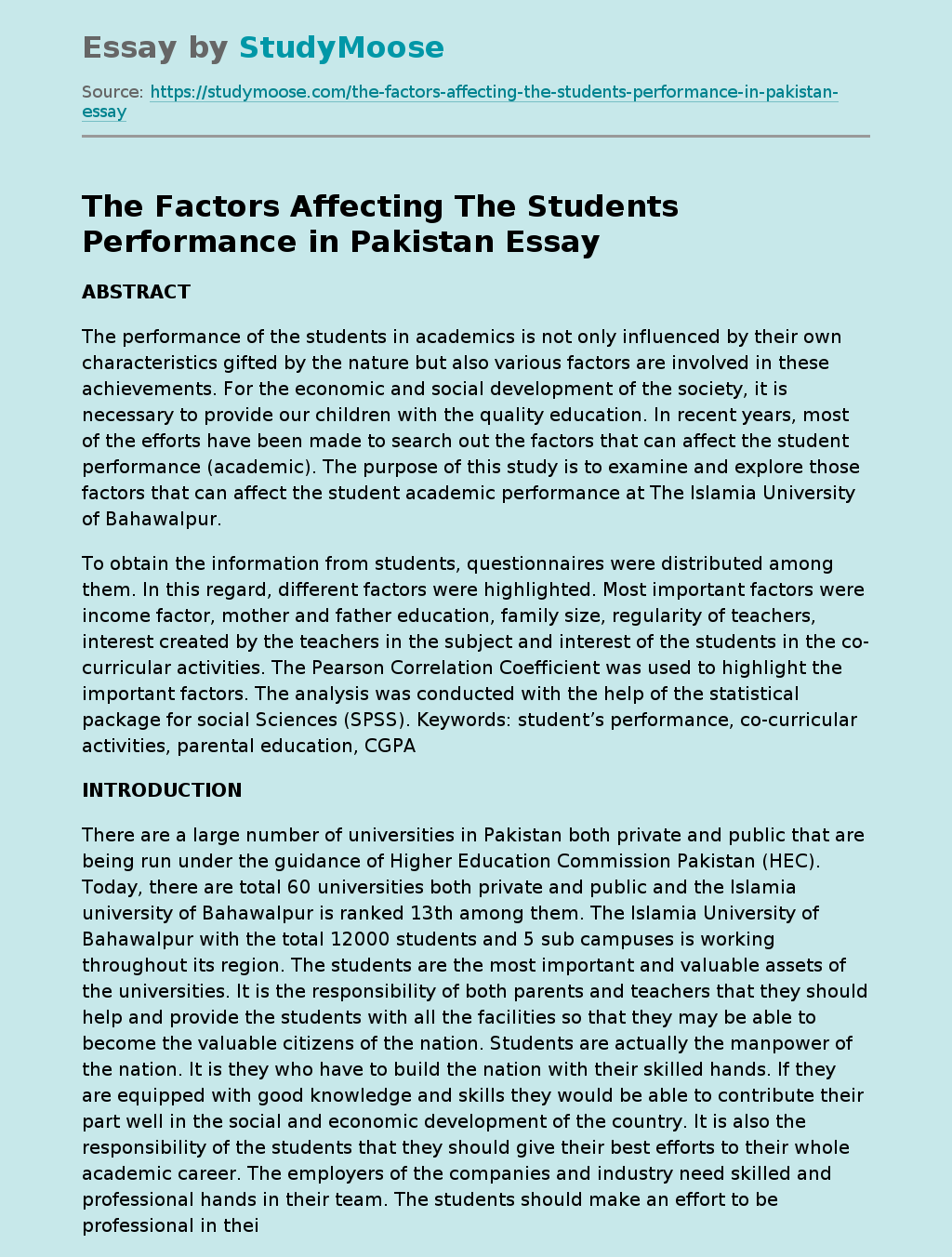