Introduction:
In reference to the collision theory, molecules act as small spheres that collide and bounce off each other, transferring energy among themselves when the collide. In order for a reaction to occur, there must be collisions between molecules. Through experimentation, factors are discovered that influence the reaction rates of chemical reactions include the concentration of reactants, temperature, surface area, the physical state of reactants, and a catalyst. This experiment regarding the factors that affect reaction rate tests the effects of increased concentration and temperature of the hydrochloric acid solution (HCl) and also the effect of increased surface area of magnesium metal (Mg).

When glow sticks are immersed in a hot water bath, it is proven that they glow with greater intensity. This proves that an increased temperature has an effect on the reaction itself, allowing molecules that make up the liquid inside the glow stick to move with greater speed, resulting in more collisions. The balanced equation for this reaction would be: Mg (s) + 2 HCl (aq) = MgCl2 (aq) + H2 (g) Purpose:

The objective of this laboratory experiment is to observe and record the effect of reactant concentration, reactant surface area and reactant temperature on the overall rate of reaction.

As the temperature of the reaction rate increases, the molecules will move faster, also resulting in more collisions and perhaps a faster reaction rate. Lastly, in a reaction, increasing the surface area of the solid reactant increases the number of collisions per second. The more collisions there are, the more energy is produced, and also could contribute to a faster rate of reaction. Procedure(s):

Please refer to Heath Chemistry Laboratory Experiment 18 A pg. 192-196 In Part III: Effect of Temperature on Reaction Rate, only three beakers were utilized in the experiment, Beaker A containing hot water, Beaker B containing water at room temperature, and Beaker C containing iced water. The fourth beaker was not utilized due to the limited time allotted for this experiment. In this experiment, a stopwatch was not used to record time. Instead, an Apple iPhone was used to calculating the time it took for the reactions to occur completely. The device was capable of calculating time to the hundredth decimal point and an uncertainty of ±0.01 was provided. Safety Notes:

Hydrochloric acid is highly corrosive to skin, eyes and clothing. When handling it, make sure to wear safety goggles, lab aprons, plastic gloves and use a full-face shield. Wash and spills or splashes immediately with plenty of water and inform the supervising teacher. Reagent Disposal- Return any unused magnesium metal to the designated container. Any hydrochloric solutions left in the test tubes should be returned to another designated container for neutralization before being discarded down the sink. Data and Observations:

1.0 M 128.50 0.00013
3.0 M 33.95 0.00048
6.0 M 13.26 0.0012
Part II- Effect of Surface Area on Reaction Rate
Shape of Magnesium Strip Reaction Time (in seconds)
±0.01 Reaction Rate (g Mg/s)
Test Tube A- slivers of Mg 110.40 0.00015
Test Tube B- rolled up strip of Mg 134.55 0.00012
Test Tube C- flat piece of Mg 128.05 0.00013
Part III- Effect of Temperature on Reaction Rate
Temperature in °C ±1
Reaction Time (in seconds)
±0.01 Reaction Rate (g Mg/s)
Beaker A- Heated Water Bath (57 °C) 73.35 0.00022
Beaker B- Room Temperature Water Bath (23 °C) 128.05 0.00013 Beaker C- Chilled Ice Water Bath (5°C) 392.50 0.000042
Qualitative Observations- Before immersion in hydrochloric acid, the magnesium strips were a dull grey colour, coated in a sort of white substance. Sandpaper was used to remove impurities from the magnesium strips, resulting in a grey strip, with a bit of metallic lustre. The strip of magnesium received was extremely malleable and was easily cut into 1 cm strips and folded into a tiny ball. During the immersion of the magnesium metal in the hydrochloric acid solution, white bubbles could be seen escaping the surface of the metal as gas was produced during the reaction. Depending on the temperature of the hydrochloric acid and the overall molar concentration, the rate of reaction differed but the same signs were shown. During the reaction between the magnesium metal and higher concentrations of hydrochloric acid, it was observed that the test tube grew quite warm to the touch. As the immersed magnesium strip sank down, it appeared coated in a layer of white bubbles that fizzed like a carbonated drink.

In the lower concentrations of hydrochloric acid, the strip spent some time floating at the surface of the solution in the test tube, later sinking down to the bottom as the bubbles died down. According to the balanced equation, the white bubbles that rose to the surface are hydrogen gas (H2 (g)) bubbles produced as one of the products in the reaction. During the reaction, as the magnesium reacted with the hydrochloric acid solution, there was a strong metallic scent that came from the open system, especially in when the magnesium strip was dissolved in the strongest concentration of hydrochloric acid. After the reaction, no trace of the magnesium metal remained in the test tube. The test tube was filled with a completely clear aqueous solution. Questions and Calculations:

The orders of reactions and equations that calculate the rate have to also be taken into consideration. 4. In Part II, the small slivers of magnesium produced the fastest reaction. This is due to in increase in surface area, by cutting the one-centimeter strip into tiny slivers, allowed more surface area to be exposed to the hydrochloric acids, allowing for a quicker reaction rate. 5. Please refer to Reaction Rate vs. Temperature Data. When the test tube containing the hydrochloric acid solution was immersed in the ice water bath, it produced the slowest reaction rate and time. This is a result of the slowing of molecules due to decrease in temperature. As the kinetic energy and movement of the molecules decrease, the reaction rate also decreases due to the reduced number of collisions between molecules. 6. a) Please refer to Reaction Rate vs. Concentration of HCl (aq).

1. It is possible to vary the factors of concentration, surface area and temperature in a way to prevent a reaction from happening. As the concentration of a solution decreases in molarity, there are fewer atoms per space for the collision to occur. By lowering the temperature drastically, it slows down the movement of particles so that the collisions are few in number and release less energy when molecules bump against each other. It is the same with surface area, as the density becomes greater and the sides exposed to the chemical reaction decrease, it lowers to rate of reaction significantly. In order to prevent a reaction from happening at all, the temperature should be extremely cold, the concentration as low as possible and the density of the reactant (ex. magnesium metal) as dense as possible, perhaps a large brick. This is only a hypothesis though, and as studied in reaction kinetics, every reaction requires a minimum amount of energy in order to react. By not achieving that bare minimum of activation energy required, a reaction will not occur.

3. Kindling wood has more surface area and has a lower density, making it easier for the fire to burn due to the increased area of exposure to oxygen (O2). The mass of kindling is also lower than a log, allowing it to heat up quickly to the temperature needed for a combustion reaction to occur. A log is very dense and has a larger mass, therefore taking a longer time to heat it up to the point where a combustion reaction would occur.

4. When a person blows on a smoldering fire, the level of oxygen is increased. Oxygen is a key component in a combustion reaction, is it needed as a fuel in order for the reaction to occur. This will increase the temperature, which speeds up the kinetic energy of the molecules molecules, allowing for more collision energy and a faster rate of reaction. Conclusion and Error Analysis:

In conclusion, it was discovered that an increase in concentration, surface area and temperature all contributed to a faster rate of reaction, developing a conclusion that all of these are factors that affect the rate of reaction. As predicted in the hypothesis, the application of the collision theory was a key factor in the increasing the reaction rate as the concentration of HCl (0.50-6.0 M HCl), surface area of Mg (slivers, rolled, and flat) and temperature of HCl (5 °C- 57 °C) was increased. The highest concentration of HCl (6.0 M) produced the faster reaction rate of 0.0012 g Mg/s. When the magnesium metal was cut into tiny slivers, this also produced a faster reaction rate of 0.0015 g Mg/s. As hydrochloric acid solution was warmed in a hot water bath to a temperature of 57 °C, it produced a reaction rate of 0.00022 g Mg/s. This experiment was not perfect, and there were many sources of error during the process of completing this laboratory experiment.

The magnesium metal utilized was coated in a dull, white coating, due to the exposure of magnesium to the oxygen in the environment, producing magnesium oxide (MgO). Sandpaper was utilized to try and remove most of the magnesium oxide coating, this also contributed to the sources of error because the sandpaper was not new and had contamination from the substances it had been used on before. Test tubes were used in the experiment, but through careful observation, some of the test tubes had not been properly cleaned, and contained minimal residue inside from previous experiments, perhaps contaminating the hydrochloric acid solution. As the magnesium metal was cut into slivers, particles of the magnesium might have been stuck to the blades of the scissors or the napkin the slivers were put on, lowering the mass and creating another error for the experiment. There was confusion during the solution preparation stage about the labelling on the jars of hydrochloric acid solution, and a new solution had to be prepared by the supervising teacher. An Apple iPhone was used to collect the reaction time, and the measurement recording was restricted due to the number of decimal places the iPhone could time to, and uncertainties had to be provided alongside the measurement data collected. There was also a source of error for the time the magnesium metal was dropped into the acid solution, as starting the time as soon as the magnesium entered the acid was very difficult. 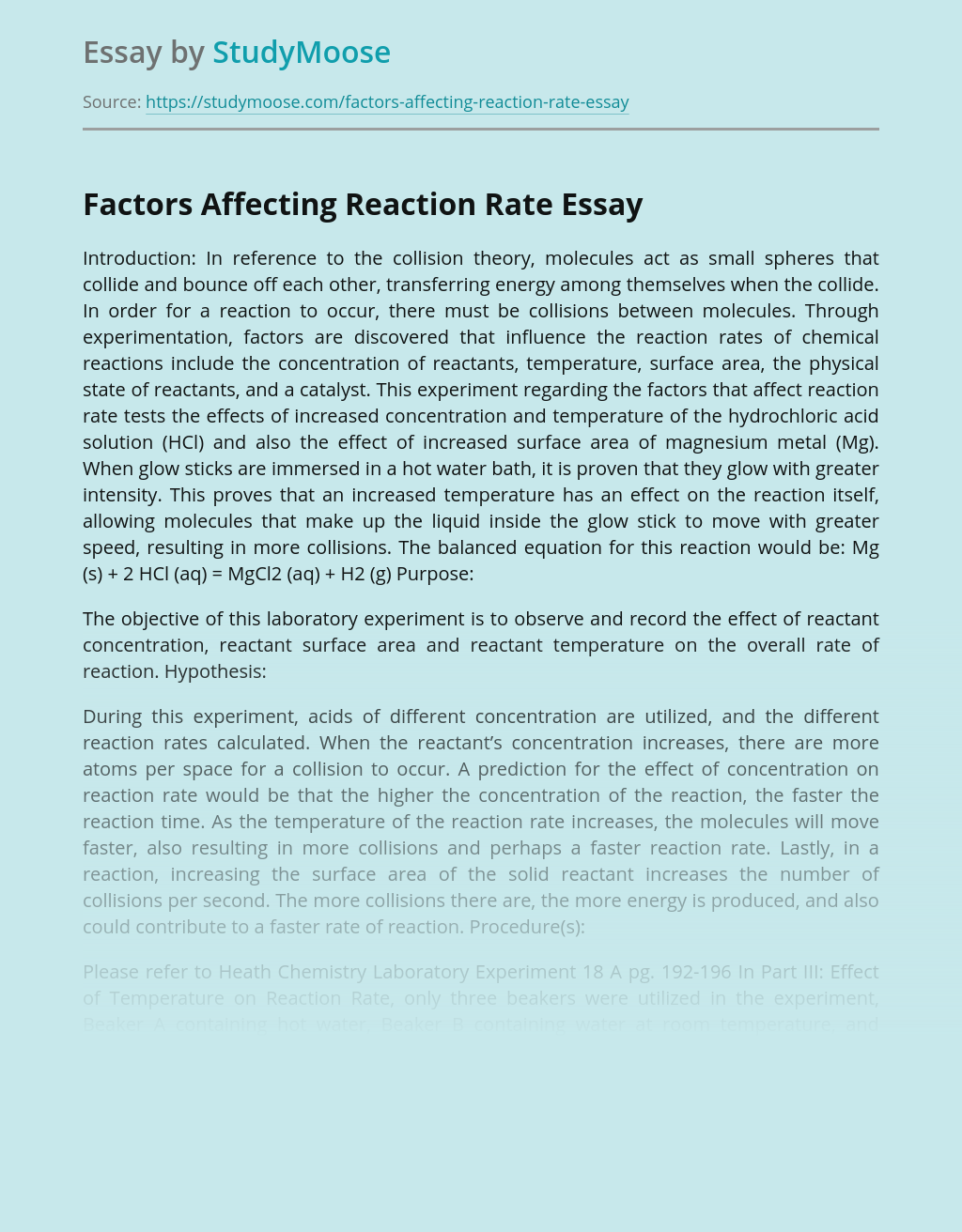