The Rate of Reaction between Hydrochloric Acid and Sodium Thiosulphate Solution

The Rate of Reaction between Hydrochloric Acid and Sodium Thiosulphate Solution

When Hydrochloric acid is added to a solution of sodium thiosulphate, a reaction takes place in which sulphur is slowly precipitated and the mixture becomes more and more opaque.

This gives us a simple way of finding the rate of reaction. If in each experiment, the same volume of solution is placed in a conical flask, then the depth of the solution will be the same for every experiment.

Don't use plagiarized sources. Get your custom essay on
“ The Rate of Reaction between Hydrochloric Acid and Sodium Thiosulphate Solution ”
Get custom paper
NEW! smart matching with writer

If a cross were to be placed underneath the flask, the cross will disappear when the same amount of sulphur has been formed. If you measure the time it takes, the rate of reaction can easily be determined. Suppose that the mass of sulphur produced when the cross disappears is 1000 units and the time for it to disappear is ‘t’, then,

In this investigation, the aim is to discover how the rate of reaction depends on the temperature of the solution.

In general, the rate of a chemical reaction depends on the following factors:

i) the temperature of the solution

ii) the concentration of the acid

iii) the presence of a catalyst

iv) the concentration of the sodium thiosulphate

So perform a fair test, it is essential that all the other factors are kept constant. The concentration of the acid was kept the same as was the concentration of sodium thiosulphate and the presence of a catalyst was not needed (see preliminary work).

thiosulphate. These were heated in a conical flask in a water bath (see diagram above) up to 30 C and then 5ml of hydrochloric acid was added. The time it took for the cross to disappear was recorded. It took 34s.

The preliminary was useful on two accounts. Firstly it is obvious that the experiment is fast enough and does not need the help of a catalyst. In fact, at 30 C, the reaction was slightly fast. In the proper experiment, 30ml of water will be mixed with 20ml of sodium thiosulphate instead of 20ml of water with 30ml of sodium thiosulphate. This should make the reaction slightly slower, thus easier to record, meaning that at higher temperatures the results should be more accurate.

* Add 20ml of Sodium thiosulphate to 30ml of distilled water in a conical flask.

* As soon as the cross has disappeared, stop the watch and record the time taken.

* To ensure a fair test, clean out the conical flask thoroughly with distilled water.

Average time for cross to disappear

Between sodium thiosulphate and Hydrochloric acid

From this table, a graph can be plotted, showing rate of reaction (x axis) against the temperature of the water bath (y axis). It is shown on graph paper on the next page.

On the graph, one result is circled. This is an anomalous result, a result that is slightly out of alignment with the line of best fit. This could have been caused by a number of things. Firstly, it was very hard to judge when the cross had fully disappeared. Also, the sodium thiosulphate was being used by a whole class and it was very possible that some foolish member had slightly contaminated the sodium thiosulphate. This would have lead to a reaction that would have been too quick which is so in this case (see graph). One cannot rule out an error on our part either, and that we heated the water bath slightly above the required temperature, although this is unlikely because both readings that were taken were very close, which shows that the most likely reason for this anomalous result is that the sodium thiosulphate was contaminated for that temperature.

Eventually, the reactions would stop, because the temperature would get too high and eventually boil all the water in the water bath. This could not be proved as the reactions got too quick to record accurately.

The experiment is not perfect by any means but I would say there is definitely enough evidence to support a firm conclusion. On the graph, there is a very apparent best fit line, and the results backed up the conclusion very well.

However, there are many points to be improved, and thought about. for one, the moment the cross has completely disappeared relies far too much on human judgement and is very dubious. When looking for something very intently, one may imagine something is there when it is not. Human reaction time on the stopwatch when this has registered on the stopwatch is also far from perfect, but this has to do without using severely complicated and expensive equipment.

One problem with doing the experiment was the shortage of time. If we had considerably longer, then we could have used a much weaker concentration of sodium thiosulphate (say 10ml sodium thiosulphate and 40ml distilled water), thus being able to find out the rate of the reaction at higher temperatures, and perhaps discovering how high a temperature the reaction continues up to. Certainly, if further work on this topic was carried out, this would be the aim. Learn what is the optimum concentration of pectinase

The Rate of Reaction between Hydrochloric Acid and Sodium Thiosulphate Solution. (2020, Jun 02). Retrieved from http://studymoose.com/rate-reaction-hydrochloric-acid-sodium-thiosulphate-solution-new-essay 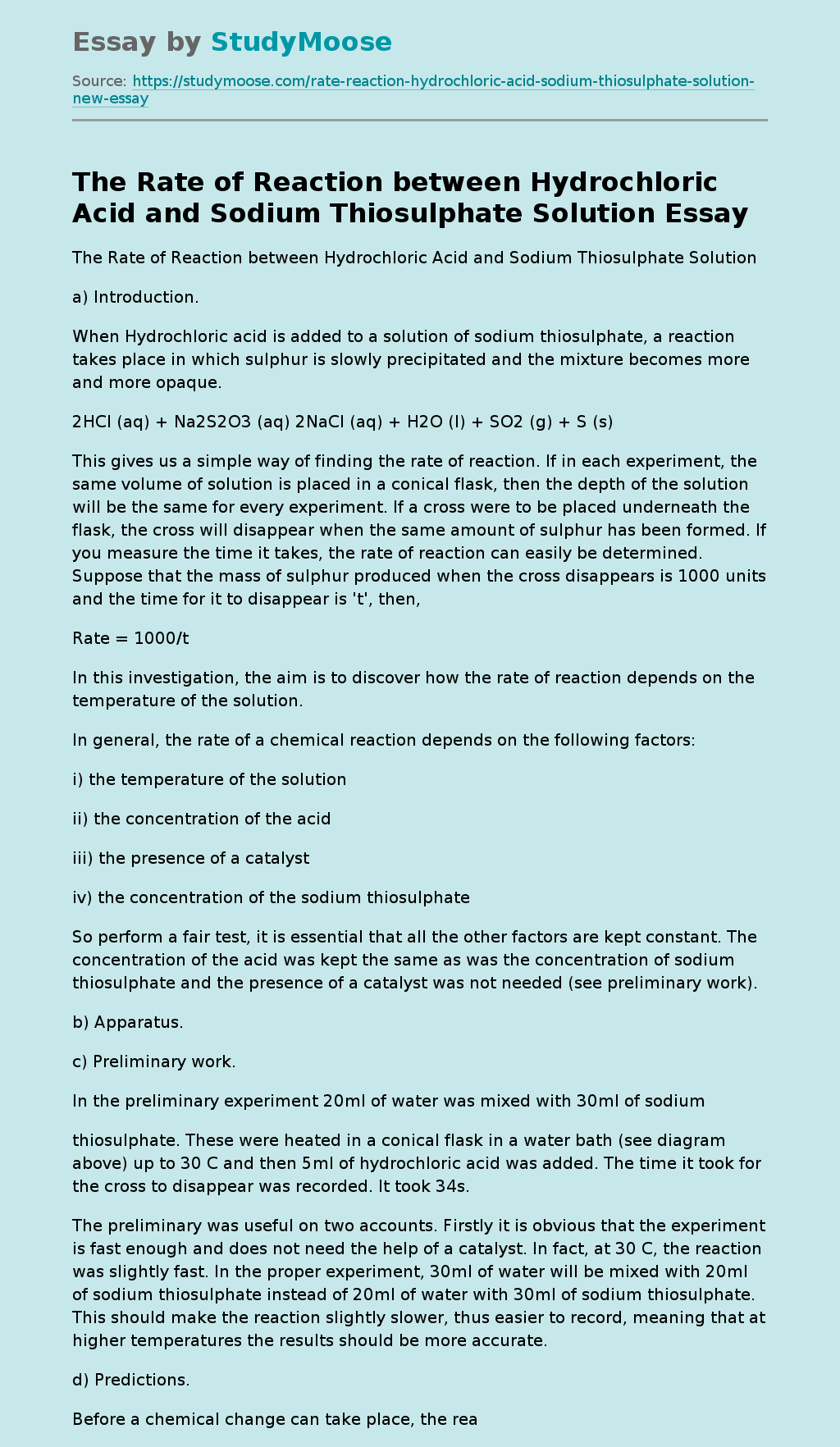