Explication Essay of “Cities and Thrones and Powers” by Rudyard Kipling

“Cities and Thrones and Powers, / Stand in Time’s eye,” (lines 1, 2). These lines set the stage for the poem’s meaning. Rudyard Kipling uses figurative language, word choice, and rhythm to create the meaning “Nothing in this world lasts forever, but life is everlasting,” Rudyard Kipling then dives further and creates a deeper meaning underneath that of the first saying, to enjoy the experience of life and to not get caught up in the hardships of life. He also says that life is everlasting, it might change form, but it will never end.

Don't use plagiarized sources. Get your custom essay on
“ Explication Essay of “Cities and Thrones and Powers” by Rudyard Kipling ”
Get custom paper
NEW! smart matching with writer

There is an abundant use of figurative language, such as similes and personification, in this poem to help create the meaning. In line 3 and 4 he compares life in general to flowers, “Almost as long as flowers, / Which daily die.” With these lines he is comparing society to a flower, and in the grand scheme of things our lives are very small in comparison to the bigger picture. In the second stanza he is comparing our entire existence with a daffodil.

“Esteems her seven days’ continuance, / To be perpetual.” (Lines 14 and 15). The daffodil believes that she will go on forever even though her life span is only seven days long. Like the daffodil in the poem, our society often focuses on our own lives and we thinks that it will last forever.

Rudyard Kipling also uses excellent word choice to enhance the meaning of his poem. In the last line of the poem the word shadow is used. “Shadow to Shadow, ‘see how our works endure!’”(Part of line 22).

He uses the word “shadow” to say the beginning and end. The word “shadow” creates a darker meaning than other words he could have used. He offsets the dark meaning by using the word “endure”. With this word he creates a sense of invincibility, in that life will never end. These parts of the last line mean people are not life itself but just a small piece of it and this is why life will truly never end.

In this poem, Rudyard Kipling creates the meaning, “Nothing in this world lasts forever, but life will endure.” This meaning is created with the use of figurative language, rhythm, and word choice. In the end things will die, but other things will rise again.

Cities and Thrones And Powers
Cities and Thrones and Powers,
Stand in Time’s eye,
Almost as long as flowers,
Which daily die:
But, as new buds put forth,
To glad new men,
Out of the spent and unconsidered Earth, The Cities rise again. This season’s Daffodil,
She never hears
What change, what chance, what chill,
Cut down last year’s:
But with bold countenance,
And knowledge small,
Esteems her seven days’ continuance
To be perpetual.
So time that is o’er kind,
To all that be,
Ordains us e’en as blind,
As bold as she:
That in our very death,
And burial sure,
Shadow to shadow, well-persuaded, saith, “See how our works endure!”

Explication Essay of “Cities and Thrones and Powers” by Rudyard Kipling. (2016, Mar 21). Retrieved from http://studymoose.com/explication-essay-of-cities-and-thrones-and-powers-by-rudyard-kipling-essay 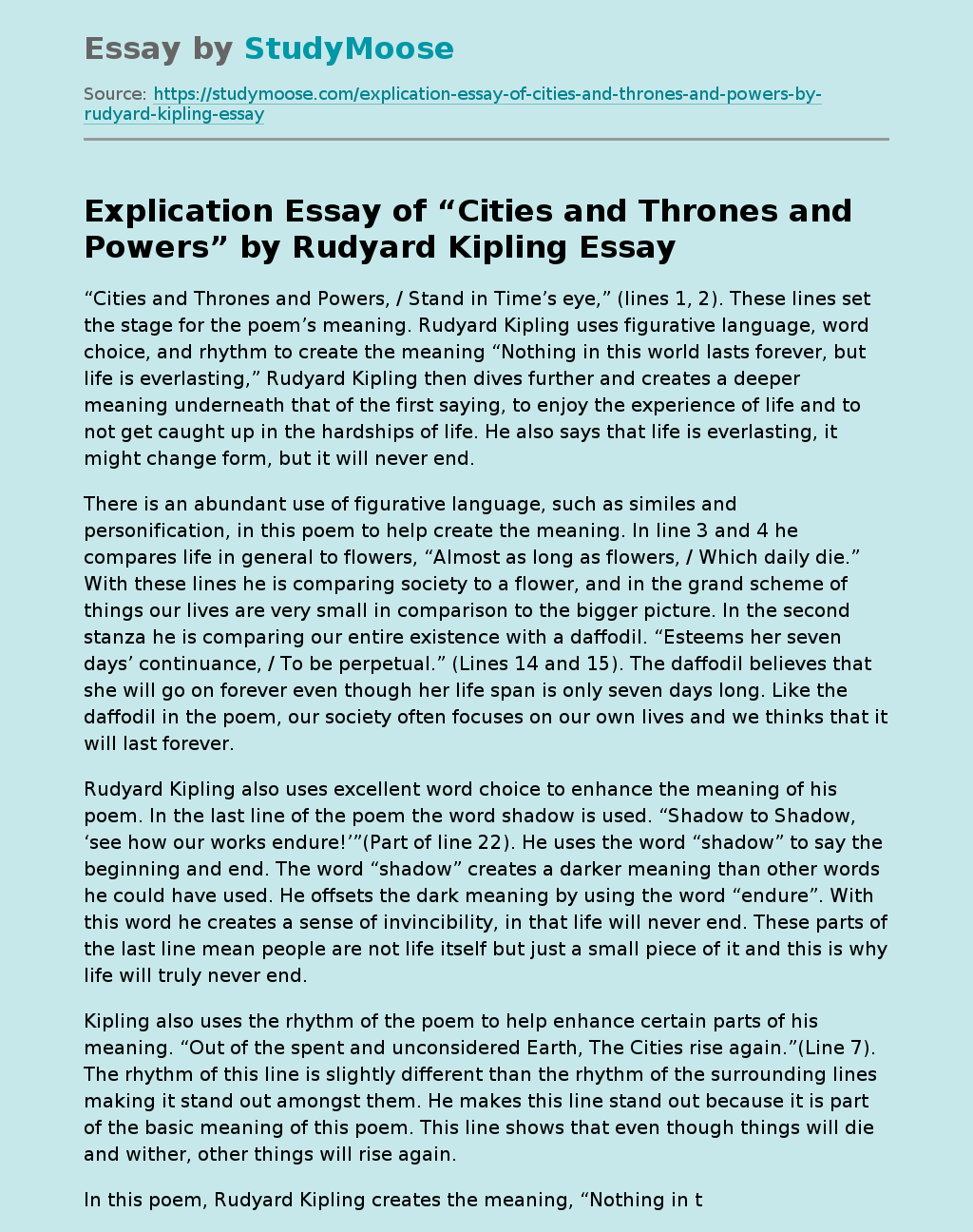