The Man Who Would Be King by Rudyard Kipling

What was Rudyard Kipling’s attitude toward the British Empire, and how did he convey his message in his novella, The Man Who Would Be King? Kipling was a loyal imperialist. The India he portrayed was British India. Oppressed India subject to Britain’s colonial domination. He always thought that the British Empire had a right and responsibility to maintain India’s government. His attitude towards India was either condescending or oppressive. He also believed in “Noblesse Oblige,” a French expression which are the obligations of those belonging to the upper or noble class.

Don't use plagiarized sources. Get your custom essay on
“ The Man Who Would Be King by Rudyard Kipling ”
Get custom paper
NEW! smart matching with writer

If you have power, wealth, or status, you have a responsibility to people who are less fortunate. He thought English man were selfish and thought they were superior to anybody else. He conveys this belief through the characters in his novella: “The man who would be king” Kipling thought the upper class British only cared about themselves and didn’t pay attention to the necessities of those who worked for them.

He believed they were so prideful and confident that they would do anything they wanted to feel better. He shoes this in “The man who would be king” when Carnehan says “Therefore, such as it is, we will let it alone, and go away to some other place where a man isn’t crowded and can come to his own. We are not little men, and there is nothing that we are afraid of except Drink, and we have signed a Contrack on that. Therefore, we are going away to be Kings.

” This shows that they thought they could be much better and do bigger things in another place. The characters describe their journey as an opportunity to go where no Englishman have gone, and take over. The story is about two ambitious ex-soldiers stationed in India who set out to become the rulers of an entire country.

After finishing their tour of duty in India they decided that India was “too small for the likes of them,” so they bribe a local ruler and rob money from him using it to buy twenty Martini rifles to use to take over villages in Kafristan. Daniel and Peachey represent the Empire expanding to the benefit of the natives. The ‘White man’s magic’ manipulates and impresses the credulous natives, and they reap the benefits of their modernity by ruling and lying. They risked many things just to go on their journey of being kings. This shows how much they thought of themselves and so little of the other natives. They think of them as fools and gullible people they could surpass with their lies. After being in many hardships along the way and benign difficult, they decided to pretend they were Gods.

The Man Who Would Be King by Rudyard Kipling. (2016, Sep 23). Retrieved from https://studymoose.com/the-man-who-would-be-king-by-rudyard-kipling-essay 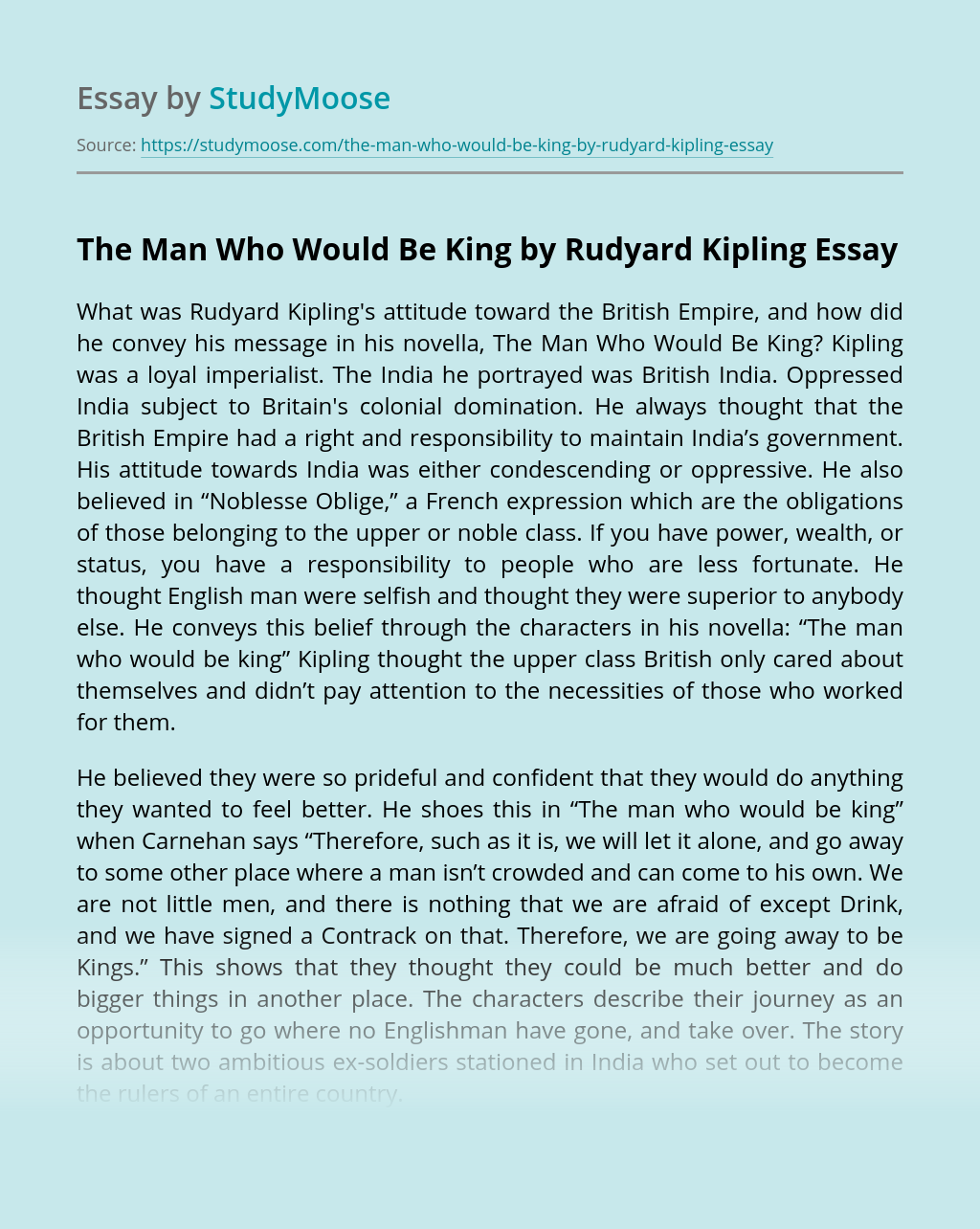