Explain How Lady Macbeth Changes Throughout the Play Macbeth Essay

Shakespeare’s play “Macbeth” which is considered one of his darkest and most powerful tragedies, Lady Macbeth, a very important character, changed dramatically throughout the play. At first she appeared confident, assertive and the dominant partner. She was cold blooded and cruel but then she became nervous, scared and suicidal. Soon Macbeth and Lady Macbeths relationship starts to falter. She is the one who influenced and hurried Macbeth to kill Duncan so to have more power, so Macbeth could become king and they could be very wealthy and have a lot of power.

Don't use plagiarized sources.
Get Your Custom Essay on Explain How Lady Macbeth Changes Throughout the Play Macbeth Just from $13,9/Page

At the beginning of the book Macbeth was awarded the position of Thane of Cawdor, but Lady Macbeth wanted more, she wanted to be powerful and rich which is why she and Macbeth decided to kill Duncan at their own house. “Stop up th’access and passage to remorse, That no compunctious visiting’s of nature, Shake my fell purpose nor keep peace between, Th’effect and it” (1.

5. 42-45). This is Lady Macbeth asking to have no remorse or fear of what’s about to happen, she’s asking to have strength to carry on with her purpose and dare not stop it.

“Come, thick night, And pall thee in the dunnest smoke of hell, That my keen knife see not the wound it makes, Nor heaven peep through the blanket of the dark, To cry, ‘Hold! Hold!’” (1.5.48-52). This quote means that she doesn’t want anyone to interfere with her purpose she wants to keep up with the plan and not let anybody or anything stop her. She seems very confident in herself, she’s asking for these things, strength, no remorse or fear but she is confident that her plan will work so long as nobody interferes.

“Give me the daggers. The sleeping and the dead are but as pictures; ‘tis the eye of childhood, That fears a painted devil. If he do bleed, I’ll gild the faces of the grooms withal, For it must seem their guilt” (2.2.56-60). In this quote Lady Macbeth is saying to Macbeth that she will clean up and make it look like Duncan’s guards are the ones who killed him, she’s very assertive here and confident. She appears to be the dominant one because she is taking charge of the situation and finishing the deed. “Get on your night-gown, lest occasion call us, And show us to be watchers. Be not lost, So poorly in your thoughts” (2.2.73-75). Again in this quote you can really see how Lady Macbeth is taking charge and knows what she’s doing, Macbeth seems wracked with guilt and Lady Macbeth is helping him to see that he needs to act innocent.

Explain How Lady Macbeth Changes Throughout the Play Macbeth. (2016, Oct 02). Retrieved from https://studymoose.com/explain-how-lady-macbeth-changes-throughout-the-play-macbeth-essay 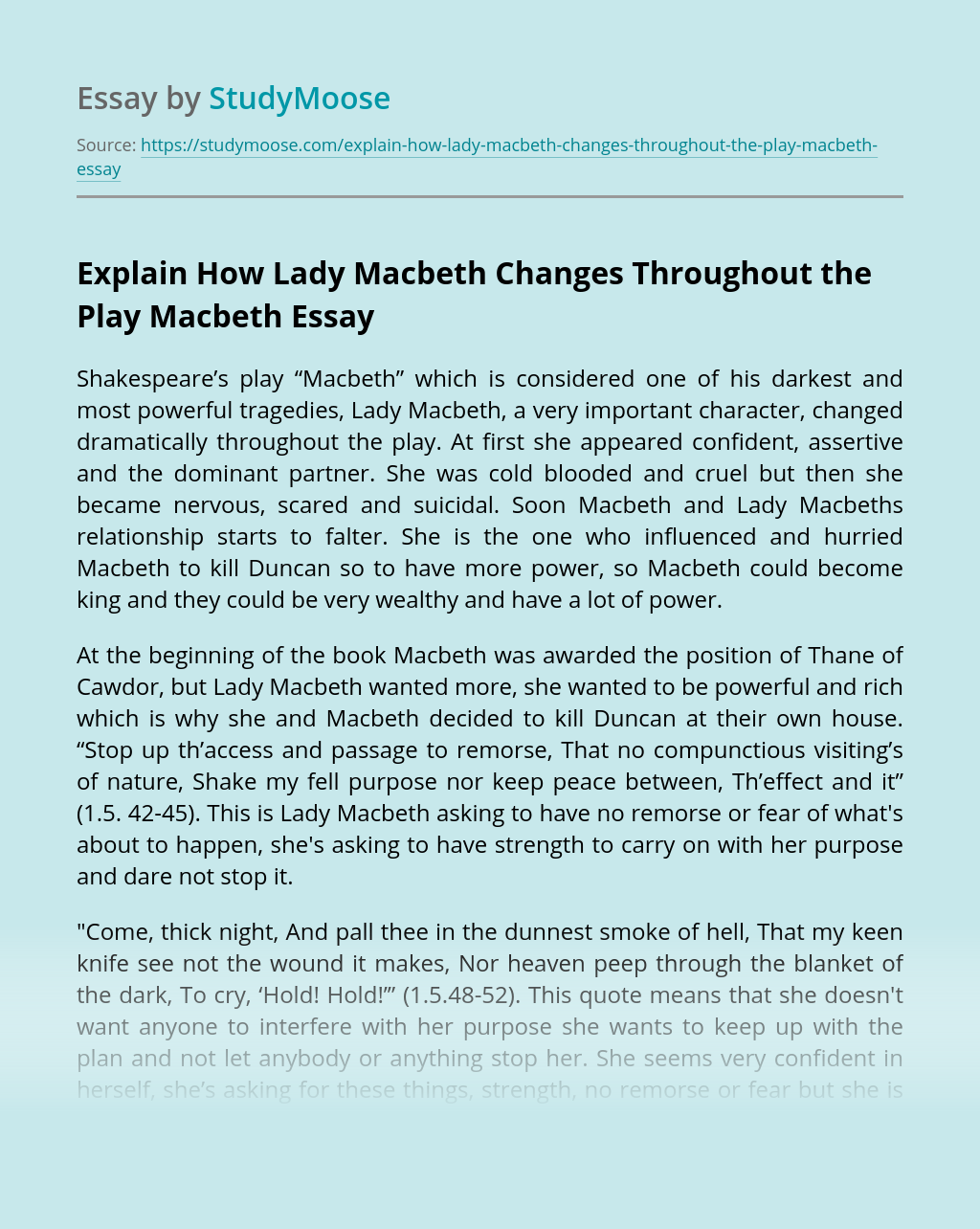 Should Same Sex Couples Be Allowed to Adopt?

As time progresses societies view on certain subjects has become more lenient. One thing that still can cause an uproar seems to be what women decide to do with their children once they become pregnant, whether it be abortion or adoption. Even more controversial on the latter subject seems to be who can and cannot... VIEW ESSAY

2.9 Work-Related Health Problems Because of monetary changes, women in developing countries are taking an interest in formal paid work and encountering medical issues as a result, however, these are not very much reported. Work-related medical issues incorporate both of the mishaps in the working environment and illness/handicaps brought about by the work circumstance. Nevertheless,... VIEW ESSAY

Analyze the Main CharacterThe main character named Elphaba, in the novel Wicked, raises the debate to whether evil is inherited genetically or developed by social injustice. Elphaba, having been born with a pale green skin tone and razor sharp teeth was automatically rejected by society at birth. As she grew older she developed a vast... VIEW ESSAY