Evaluation of the Effects of Poverty in Alexandra Informal Settlements

A vast majority of people in the World’s population live in extreme poverty. Poverty is multi-faceted. It can be linked with hunger, unemployment, exploitation, and lack of access to clean water, sanitation, health-care or schools. It can be about vulnerability to crisis and homelessness. While clearly many of these issues are related to not having enough money, it is simplistic to ignore the non-material aspects of the experience of poverty. The poor are not concerned exclusively with adequate incomes and consumption.

Don't use plagiarized sources. Get your custom essay on
“ Evaluation of the Effects of Poverty in Alexandra Informal Settlements ”
Get custom paper
NEW! smart matching with writer

Achieving other goals such as security, independence and self-respect may be just as important as having the means to buy basic goods and services. The research is focused on the evaluation of the effects of poverty in Alexandra, in particular, people living in informal settlements. There is evidence from several studies that indicates high levels of poverty in the numerous informal settlements in Alexandra. Various reasons such as lack of skills, unemployment and retrenchment have been pointed out as the cause.

In informal settlements of Alexandra, most people live in corrugated iron shacks and where they are often unable to acquire basic needs such as food and clothing. This condition is further exacerbated by environmental factors such as lack of proper toilet facilities, the absence of employment opportunities that result in feelings of helplessness, which in turn leads to drug and alcohol abuse. Thus the family and home in this environment becomes dislocated which in turn affects the wider community and society as a whole.

The choice of Alexandra for the study was made due to its history of neglect during the apartheid era which has made it one of the most impoverished towns in South Africa, notwithstanding that it borders the most affluent part of Johannesburg.

In order to gain an understanding on the effects of poverty in Alexandra, a literature study and site analysis will be employed as research method. Data will be collected using a literature review and empirical investigation. The research will help the government on how they can assist the people of Alexandra to alleviate poverty.

Evaluation of the Effects of Poverty in Alexandra Informal Settlements. (2016, Sep 15). Retrieved from https://studymoose.com/evaluation-of-the-effects-of-poverty-in-alexandra-informal-settlements-essay 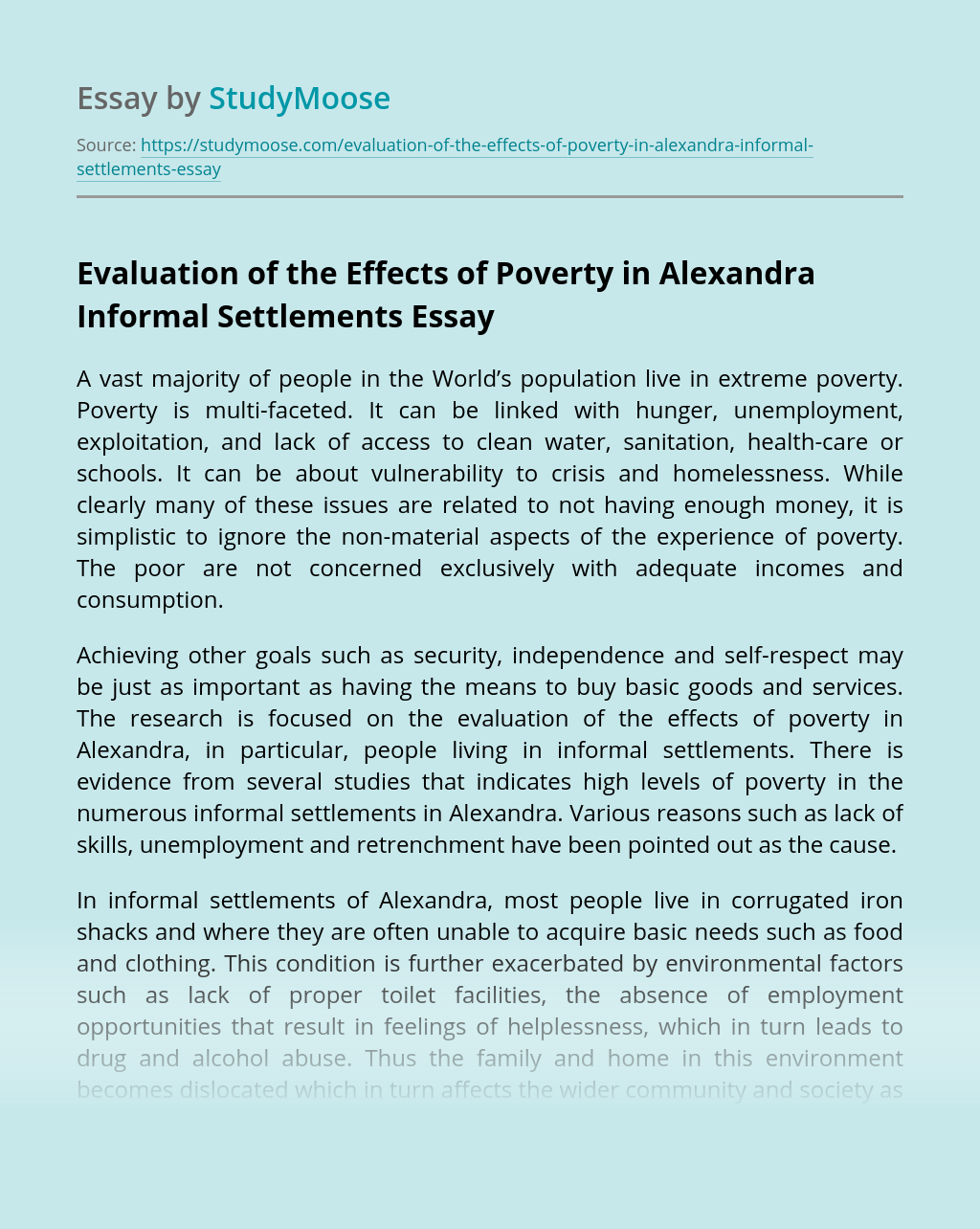