Aunt Alexandra in "To Kill A Mockingbird" by Harper Lee

Aunt Alexandra comes to the Finch residence at the end of chapter twelve, declaring that the family decided that it would be best for Scout and Jem to have some feminine influence in their lives. Scout knows that Alexander usually dictates what she wants upon the family, and uses the term the family decided to make her an even greater point of authority in the Finch family. Usually her dictations give her chances to impress her views on others or increase the family name and work towards the ideal family that she envisions.

Don't use plagiarized sources. Get your custom essay on
“ Aunt Alexandra in “To Kill A Mockingbird” by Harper Lee ”
Get custom paper
NEW! smart matching with writer

Examples of her tyranny include the time she made Atticus attempt to impress on the children the facts of life and how she forced herself upon Atticus and the children (dictating that she should move in with in them).

Aunt Alexandra makes refreshments for the Missionary Society. These refreshments she makes herself rather than getting Calpurnia to make them; perhaps this is attempt to prove herself superior to almost everybody else while also adding to her reputation of a good hostess.

As well as making refreshments for the missionary society Aunt Alexandra joined the Maycomb Amanuensis Club and became the secretary. Aunt Alexandra is slightly hypocritical because as an incurable gossip she has no problem making down almost everyone in Maycomb but couldnt hear a word against herself or the rest of the Finch family. She also said that almost everyone in Maycomb had a streak but when Atticus pointed out that the Finches had an incestuous streak she completely denied it.

Aunt Alexandra has many good and bad qualities most concern the maturation and upbringing of the children. Good qualities include the fact she wants the best for Jem, Scout and the rest of the family, she will uphold any moral (page 146), she had plenty of pride in her family and she constantly tries to improve herself (page 147). However she has a lot of bad qualities; she is dictative, she is prejudice and she believes Finches are of a higher class to almost all others.

Aunt Alexandra is a major character in the story because of she is one of the only points of authority and the greatest feminine influence for Scout and Jem. Despite her faults she does what she believes is best for the children and community.

To Kill A Mockingbird by Harper Lee

Aunt Alexandra in "To Kill A Mockingbird" by Harper Lee. (2016, Jul 04). Retrieved from http://studymoose.com/aunt-alexandra-in-to-kill-a-mockingbird-by-harper-lee-essay 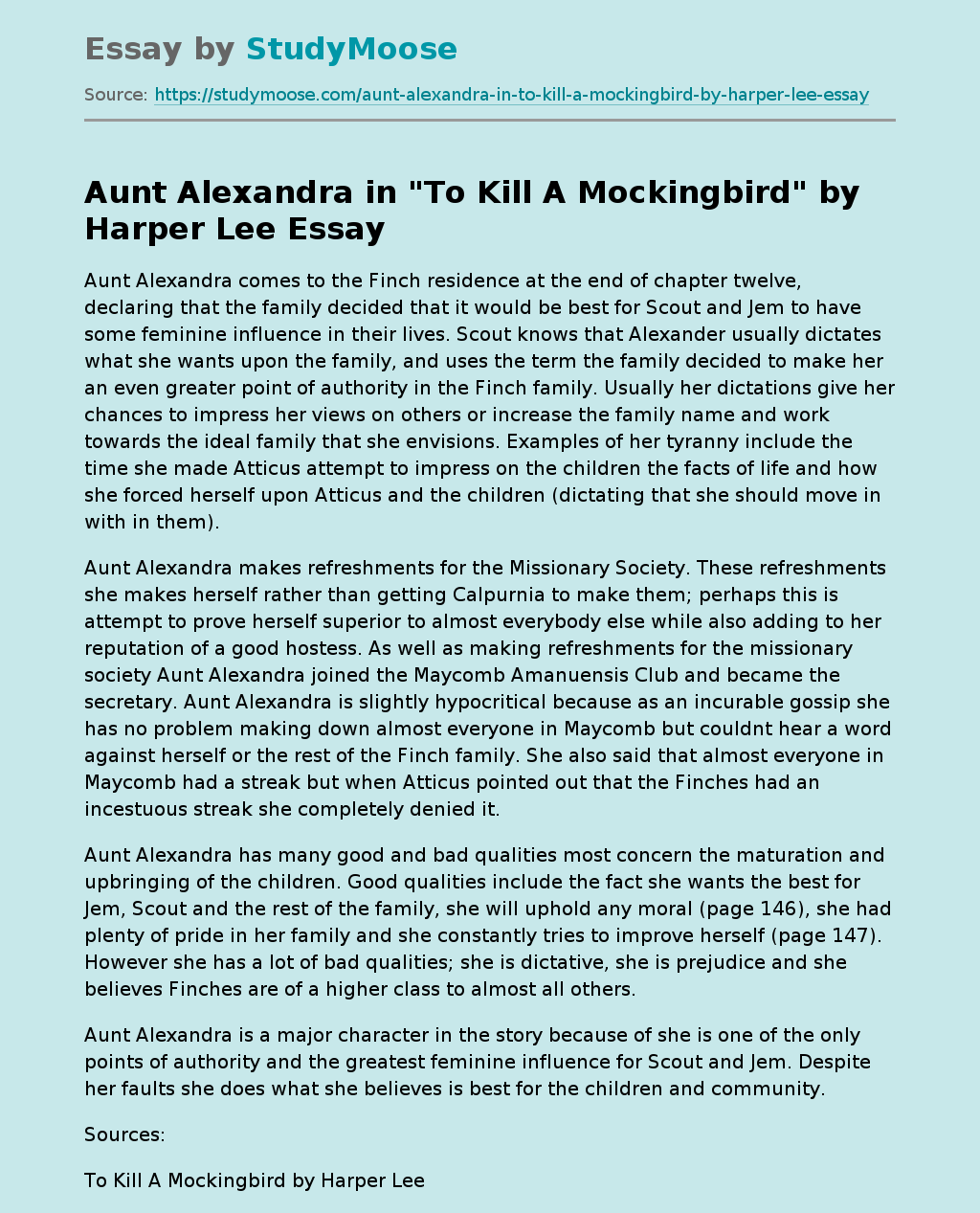