?Evaluate the Consequences of Migration

Migration is regarded to be the transfer of people from one place to another. This constantly increasing phenomenon is the result of different factors such as globalization or if we enter in more detail, what we call push and pull factors or even compulsory migration due to war or social complications. Nowadays, migration has become a subject of controversy. There is been in the last decades serious limitations to one the most important freedoms the human had for millennia; migration, because of mainly cultural reasons with integration being the tough part.

Don't use plagiarized sources.
Get Your Custom Essay on ?Evaluate the Consequences of Migration Just from $13,9/Page

We will be therefore evaluating the consequences of migration and looking at the truth behind them. The economic consequences of migration for host countries have often been faked by social categorization such as immigrants stealing jobs or relying on social welfare to make a living. The basic belief is that migrants take more from the economy than they put in which proves to be completely false. Actually, work by the National Institute of economic and social research suggests that around 17% of economic growth in 2004 and 2005 is attributable to immigration and also a Home Office Study found that that migrant made a net contribution of around £2.

This shows how beyond categorization actually migrants do have a positive impact on the economy of host countries and even prove to be in particular cases the principal cause to economic growth. Another spread belief says economic migrants increase levels of unemployment and reduce the earnings of British workers. However for instance in the UK we can see very little or no negative impact caused by migrants as the UK-born population has experienced a stable employment rate of around 75% over the last decade whilst the number of immigrants has been in constant increase and also the National Minimum Wage found that immigration to the UK has made a positive contribution to the average wage increase experienced by non immigrant workers. These two examples show that actually, migrants do have largely positive economic consequences to the host country beyond spread ideas. These spread ideas are the cause of sadly genuine human behavior ; it is universally acknowledged that when people are experiencing hardships due to factors beyond their control(eg corrupt economic system) they will have to find someone to bear the brunt of their frustrations which are weaker or in minority such as migrants.

The economic consequences of migration for origin countries have also been source of controversy. The consequences tend to be more positive in short term to the host country and more negative in long term, hence while migration is regarded in one fashion to be increasing political and economical difficulties for the host countries for factors such as “brain drain”, it is also regarded on the other hand to be one of the major cause of decrease in poverty in the sending countries because of remittances sent by migrants to their family still in the origin country. Actually remittances, following the ONU, represent nor less than 20 billion dollars per year or one third of industrial states funds for help in international development. However brain drain is another issue and counter balances the positive effects seen earlier, as for instance 30 or 40 percent of formed Armenians migrated to foreign countries causing in long term critical shortages of some skills and undermining the ability of some countries to deliver certain public goods such as healthcare. Nevertheless the brain drain effect is still controversial as some of these assumptions may not actually hold, several studies showed that often migrate return to their origin country with greater skills which counter balances the argument.

The economic consequences of migration for the sending country still look quite unclear, yet we could consider the effects largely positive for the economy undermining few long term issues. The social consequences of migration for the host country are from far the most controversial. Nevertheless these show to be in some cases quite positive. For instance the United Nations Population Divison has suggested that Europe might need ‘replacement migration’, to cope with the ageing population problem, of between 1 million to 13 million new migrants per year between 2000 and 2050 which shows their importance involving social problems. However migration also reveals to have negative social consequences for the host country, for instance it has in some extent resulted in segregation and the growth of parallel communities, In England, there are appreciable numbers of colored people who entered the country after World War II, although they constitute only 1 per cent of the population, their presence has created an awareness of a color problem. Since they are of varied cultural background (mainly from India, Pakistan, and the West Indies), comparative analysis may show some insight into both the role of race and of cultural differences in the exclusion and segregation of minority groups in England.

This is one of the major consequences on the social aspect as it ends up by the population growing apart undeniably causing conflicts or tensions. Another negative effect of migration is due to the significant increase in local population likely to lead to some increased pressures on services including schools, translation, social care or English language teaching. The social consequences of Migration on the host country there seems to be mostly negative and sadly because of integration problems. The social consequences of Migration for the origin country are very important and very closely linked to the studied economic effects however these prove to be mostly negative. The major negative consequence is the change in family composition leading to various problems. For instance the age- and sex-selectivity of Albanian migration puts particular pressure on those married women left behind in rural areas (over 20,000 married women were living without their husbands in 2001). They will have to looking after the family, the house and the land by themselves.

These imply increasing social costs on Albanian rural families and communities left behind. They are also very much aware of their increased vulnerability and psychological stress. Another serious problem concerns elderly people who have lost their family and social support because of migration. This could be the source of an increase in mortality rate as long term effects. The social consequences are therefore largely negative. Migration can have therefore very varied consequences as we consider the impacts made on both host and origin countries which can also depend of the wealth of the country and long to short term effects. Nevertheless the overall picture is that migration has tremendous positive consequences on both host and origin country whether it is for economic growth or increasing wages and tends to have largely negative social consequences again for both countries. However, sadly the negative social impacts are in part created by the problem of integration spreading all sorts of stereotypes which keeps migration under limits. This is why in order to regain our most beautiful freedom; we have to all together migrants to get other the spread ideas and learn to coexist happily Jean-Ewen Humphris

?Evaluate the Consequences of Migration. (2016, May 07). Retrieved from https://studymoose.com/evaluate-the-consequences-of-migration-essay 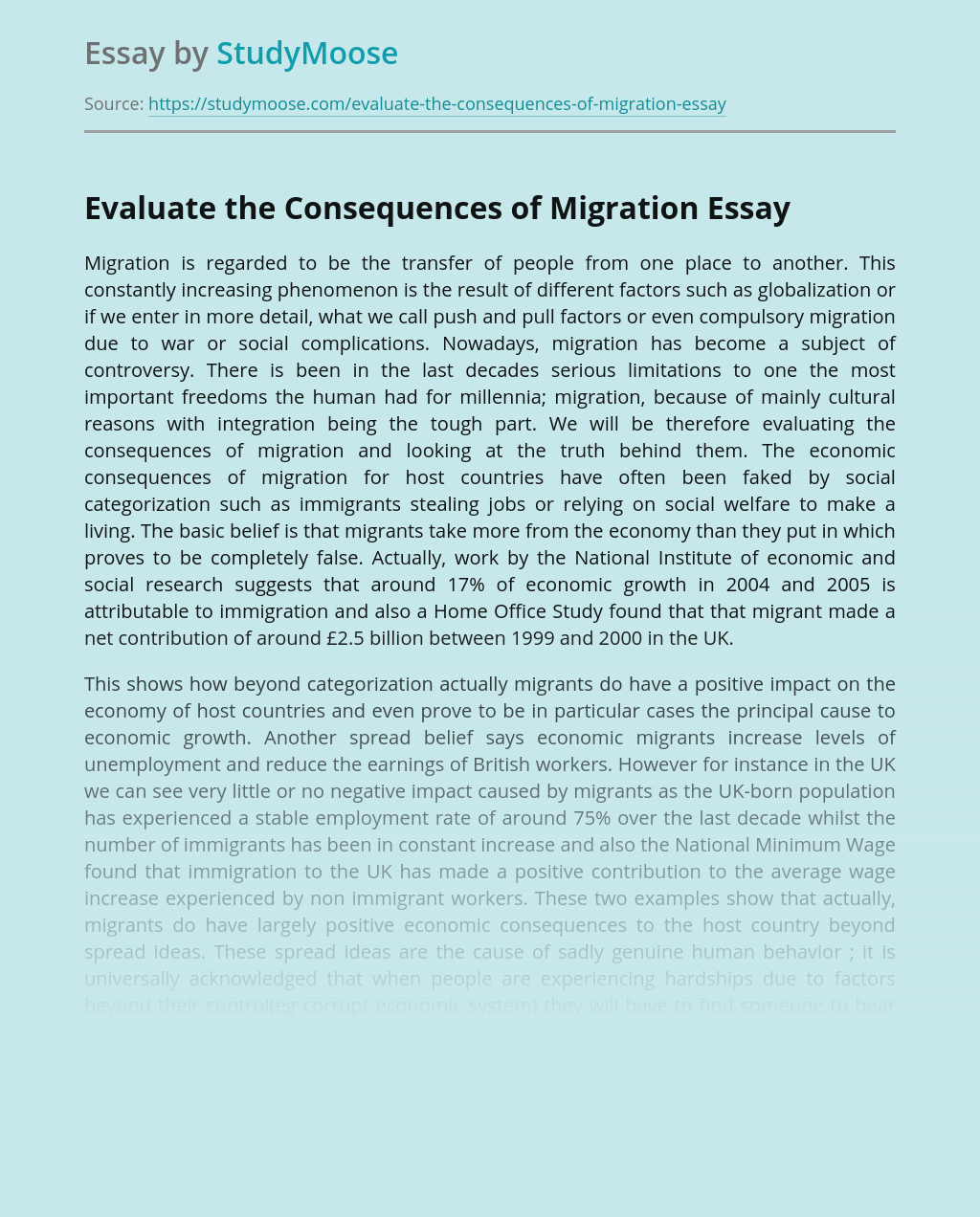 Corruption in the Gangs of New York

The Gilded Age, or as it is commonly referred to as, the era of corruption, took place in 1877 to 1900. This time period was most effectively portrayed in the novel and movie, The Gangs of New York, which was written by Herbert Asbury. The Gangs of New York focused on a time of politicalcorruption...

This pie chart shows us the percentage of immigration from Russia between 2003-2008. From different sources of information there are five different countries which contain a large number of immigrants from Russia. Nowadays we can easily change our place for living. Somebody is searching for a highly paid job, another wants to have a luxury...

Author David Cole explains in “Five Myths about Immigration” that people are misinformed about immigrants in America and blame them for all the problems in the American society. Cole comments that the “Native Americans”, which have nothing to do with what we call Native Americans today, were labeled as “Know-Nothings” because they simply did not...

There are laws defining citizenship and laws stipulating the conditions for non citizens. In most cases, there is freedom of movement from one country to another for various reasons. Illegal immigrants are those who happen to be in another country unlawfully. California records the highest numbers of illegal immigrants, most having been lured by the...

An illegal immigrant is a foreigner who has entered or resides in a country without the countries authorization. According to the C.I.A. “the nations immigrant population reached a record of 37.9 million in 2007 and nearly one in three immigrants is an illegal alien.”(Camarota) In 2000 there were reported 214 million immigrants in the world,...