The Obstacle of Migration: Land of Oranges Essay

The way we battle through adversity and recover can often times define who we are. But sometimes no matter how you battle through adversity, coming out on top is impossible. This problem is expressed in the short story The Land of Sad Oranges by Ghassan Kanafani which reveals a story of the journey and settling of a family exiled from their homeland of Palestine. This family constantly recalls oranges and orange trees, which were very prevalent in their homeland.

The oranges served as the physical and constant reminder of the families homeland, and the author uses the significance of the motif to show the obstacles faced by the people who are forced to move out of their country into their new home.

Don't use plagiarized sources. Get your custom essay on
“ The Obstacle of Migration: Land of Oranges Essay ”
Get custom paper
NEW! smart matching with writer

While the father looks at the orange, the hardships associated with migration are seen. In a lorry driving to Palestine the narrator sees his father pick up an orange and starts crying, ”I thought that the oranges were something dear and these big, clean fruits were beloved objects in [the families] eyes… The Father] began to gaze at [the orange] in silence, and then burst into tears “ (142).

In the first section, the narrator shows the reader the value and importance of the oranges by stating that the oranges are beloved fruits. These oranges are a constant reminder to both him and the family of their homeland because there are a lot of orange trees there. When the father picks up the orange and looks at it, he is reminded of his homeland.

His reaction of crying shows how he misses his his home and it illustrates one of the many difficulties experienced during the trip.

The presence of weapons at the checkpoint makes it so the family is reminded of the current ordeal they are in. While entering a checkpoint, the narrator sees “the rifles and machine-guns lying on the table… all the well-tended orange trees which your father had bought one by one were printed on his face and reflected in the tears ”(142). As the family enters the checkpoint, the scene of rifles and machine guns overwhelms them. Seeing these guns reminds them of the presence of the current state they are in, which is one of sadness and apprehensiveness of the future.

When the narrator see his father’s eyes imagining all the orange trees he left behind, the emotional hardship of accepting the loss of their homeland is presented. The oranges show the final obstacle the family must suffer through as a result of their migration. The final scene when the narrator finds a family member lying on a table with an orange next to it, “ The orange was dried-up and shrivelled” (144). As discussed previously, the orange represents the homeland of the family. However, the memories and good times associated with the homeland is what is important.

The realization of this loss is what seemed to be the final obstacle. It’s easy to relate the life cycle of an orange to their eventual sentiments. An starts out as a mere flower that emerges into a full and ripe fruit, just as this homeland was the grounds in which they shared and grew up on. Once the family left their homeland, they left behind their memories just as if we left behind an orange and were unable to eat it. However, as the orange begins to shrivel up and die, the orange loses all meaning. Just as the memories and thoughts established as a child start to disappear in a saddening fashion at the end of the short story.

The oranges used throughout the book that related back to their homeland were used to show the obstacles that the family was put through migrating from their Palestinian home. People will often say that those who endure conquer. Sadly, in the short story The Land of the Sad Oranges,the statement seems to be false. The family in the short story never conquered but they were reduced to living a life where survival was the only thing worth living for. This goes to say that not every hardship we encounter ends helping us in the end.

The Obstacle of Migration: Land of Oranges Essay. (2016, Sep 18). Retrieved from https://studymoose.com/the-obstacle-of-migration-land-of-oranges-essay 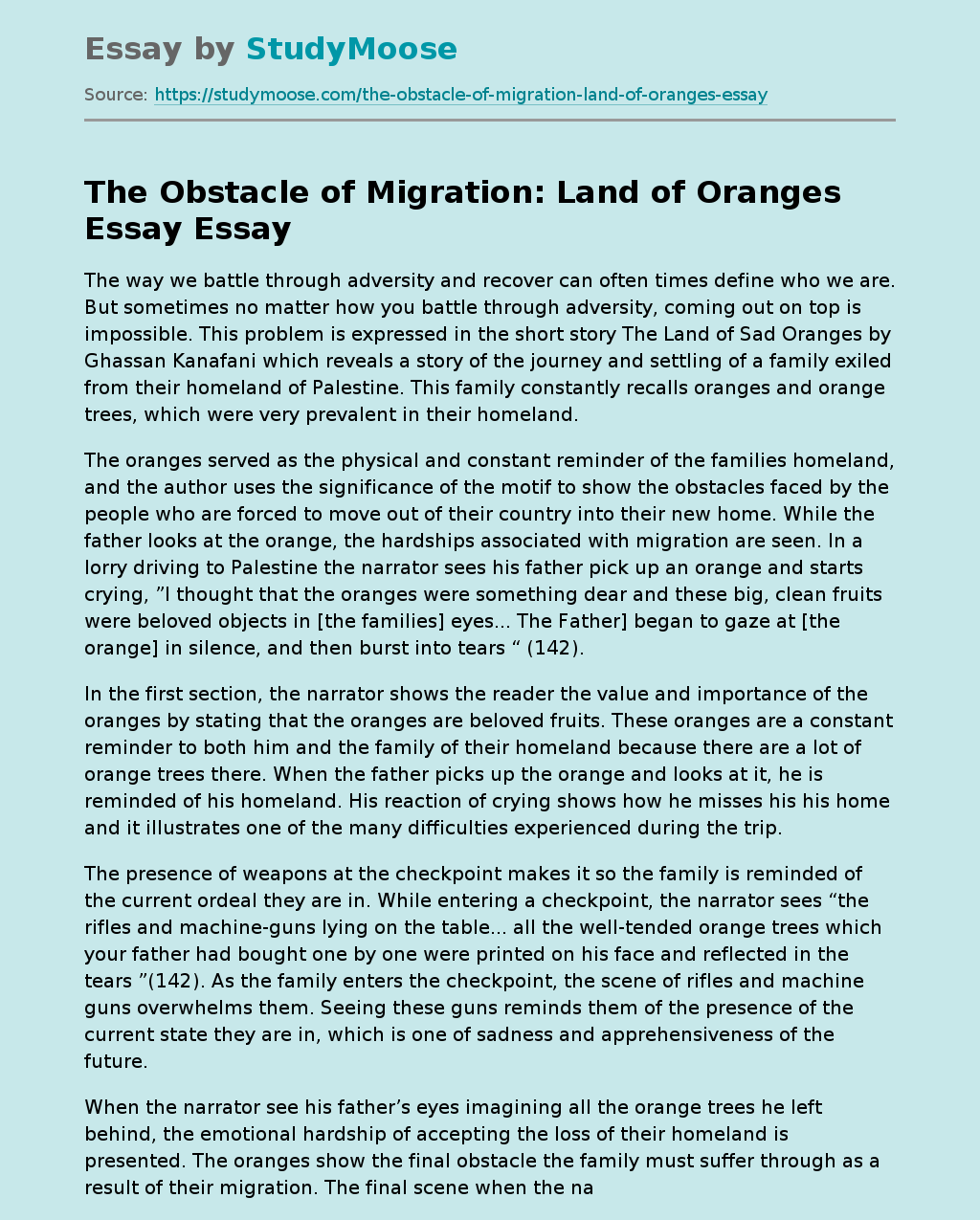