Euthymides’ Three Revelers is a Greek red-figure vase painting which dates back to about 510 BC. It was found in an Etruscan tomb in Vulci, Italy, where it had probably been imported from Athens. This is proof of the virtuosity of ancient Greek artists, and is quite ironic since the Greeks learned vase painting from the Corinthians.

The earliest ancient Greek vase paintings were created using the black-figure technique. This involved using a clay-based slip to draw on the figures and later adding details by incising them into the clay of the vase.

Don't use plagiarized sources. Get your custom essay on
“ Euthymides’ Three Revelers, a Masterpiece of Greek Art ”
Get custom paper
NEW! smart matching with writer

Through a process of firing the vase multiple times, the slip would turn black; the silhouetted painted figures contrasted with the natural brown-orange color of the vases. Exekias’ Achilles and Ajax Playing Dice (c. 525-520 BC) is a well-known example of black-figure vase painting. The background of the scene is the natural clay color and all the painted figures are blackened slip with incised details. In Exekias’ painting, there are also details in white on the capes of the two men.

The red-figure technique was developed shortly after and is the opposite of black-figure. The background around the figures was painted with slip, leaving them to be detailed with black against the natural color of the vase. This allowed the artist to paint with higher detail since no incisions were necessary.

The painting of the Three Revelers is found on a vase used for storing wine called an amphora, so it is appropriate that the three men are celebrating (and indeed reveling) in their drunkenness.

Euthymides was a rival of Euphronios, who was considered to be the master of red-figure painting. Euphronios’ innovation can be seen in his depiction of Herakles Wrestling Antaios (c. 510 BC). The two combatants are shown in higher detail and more naturally than any prior work. The giant Antaios is shown grimacing, his hair unkempt, and his body contorted. Herakles, however, shows no signs of struggle: his hair and beard are neat, his face is calm.

Perhaps the greatest achievement of the Greek vase painters was their attempt to make art more of an optically correct experience than an ideally correct one. For instance, Herakles’ right foot can be seen tucked behind his leg. The artist’s use of perspective assumes that viewers will understand that Herakles’ calf is behind his thigh, leaving only part of his foot to be seen. Before this point an artist would assume no such thing. His goal and purpose was to show his subjects so that they could be understood and identified by anyone at any time with no conjecture necessary. For instance, the low relief figures chiseled into the Harvester’s Vase (c. 1500 BC), though they are marching from left to right across the scene and we might expect to see them from the side view, are portrayed in the composite profile (profile legs, frontal torso, profile head, frontal eye).

Euthymides took this idea of correct optical representation one step further. Whereas the two main figures in Euphronios’ Herakles Wrestling Antaios are shown from the side view and the frontal view, the Three Revelers are shown not from a frontal or rear view, not from a side view or profile, and not in the composite profile used exclusively for centuries prior. They are shown in a three-quarter profile, seen from the side but not completely. The figures recede into the background creating a third dimension: depth. Euthymides knew just how revolutionary this was, so he signed his work with the customary “Euthymides painted me,” but added “as never Euphronios [could do].”

The three-dimensional foreshortening of painted figures eventually became the artistic standard because of it’s representation of optical experience rather than representation of the ideal, easily identifiable aspects of the body. This can be considered not only an important technical advance, but an artistic one as well. In Onesimos’ Girl Preparing to Bathe (c. 490 BC), the three-quarter profile lends a flowing, lifelike movement to the subject. Conversely, the contorted composite profile used in the centauromachy detail of Kleitias’ Fraçois Vase (c. 570 BC) virtually stops the motion of an otherwise active and exciting scene.

The innovation and creativity found in Euthymides’ Three Revelers began to establish the aesthetic, naturalistic focus of Greek art that followed it. Though they were first realized by ancient Greek artists, attention to detail and depiction of figures as they are seen rather than in a universally understood, simplified rendering are indeed two important concepts which can be recognized in any piece of modern visual art. Further, the Three Revelers is the beginning of a dynamic from the ancient techniques of simple representation to the infinite levels of abstraction that we find today in all art forms: music, literature, film, and so on. It should be no surprise that the same culture that turned symbolic portrayals of the world and their own mythology into what we would today call art is the same one that concentrated the eternal search for truth by giving it a name- philosophy, and in both cases provided the basis for all following thought and analyzation. 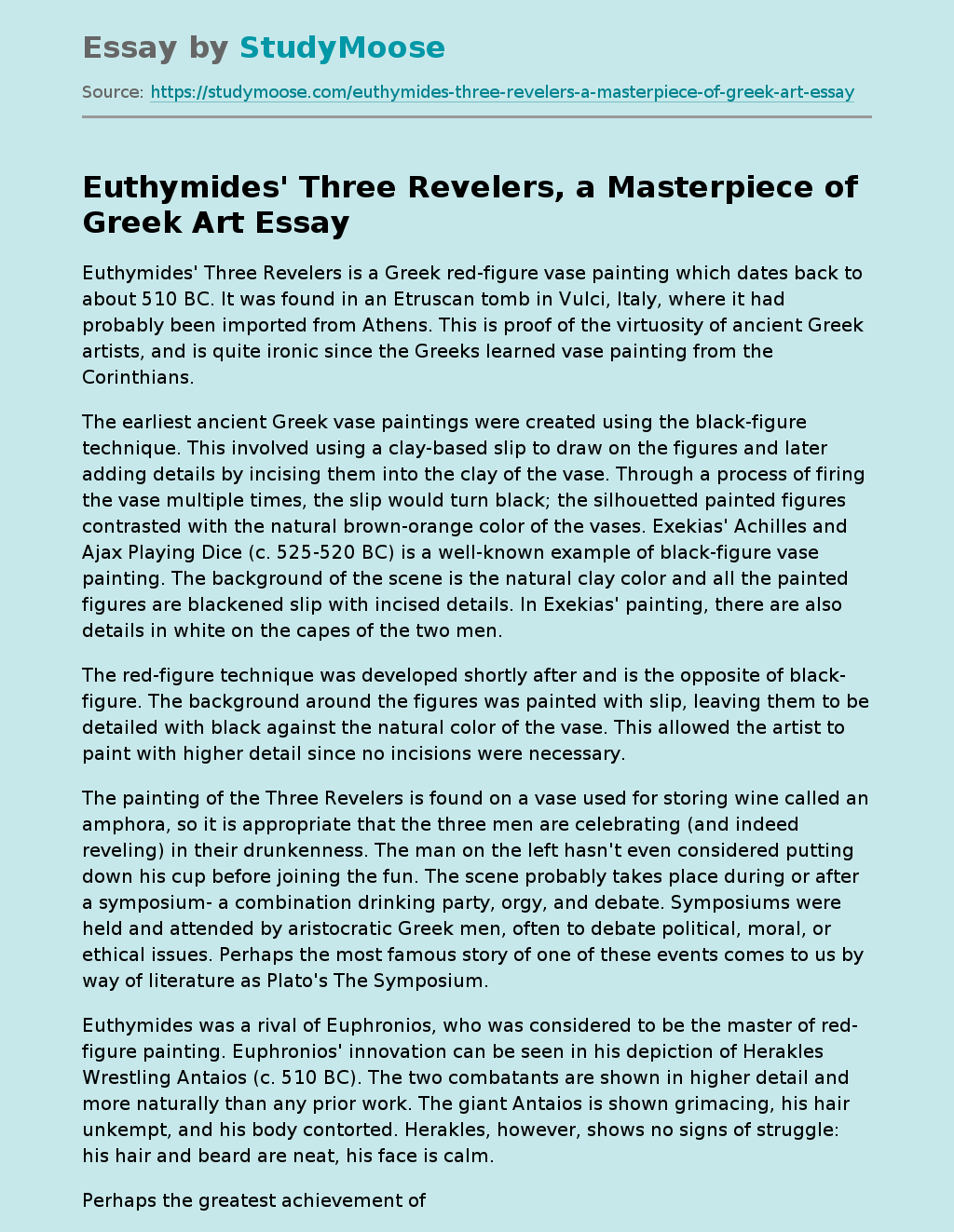