Ethics is essentially what a person believes is good or bad. By definition ethics is “rules of behavior based on ideas about what is morally good or bad” (Merriam-Webster, 2013). There are different theories of ethics which include virtue ethics, utilitarianism ethics, and the deontology theory. Virtue ethics is the theory that basically says that a person throughout their life should strive for moral excellence through life experiences. This theory looks at a person over a period of time to determine if they have good morals and can be considered an ethical person versus bashing them off in one incident or “slip-up”.

Don't use plagiarized sources.
Get Your Custom Essay on Ethics Paper Just from $13,9/Page

These “slip-ups” can be forgiven taking in account past deeds of moral turpitude and ethical acts. The utilitarianism theory is acting morally for the good of a group or society. This theory is very popular in the United States and other Western capitalistic democracies. Utilitarianism works when the people in that particular group or society agree on what is considered moral and what would be deemed good for them as a whole.

The utilitarianism theory can also be seen as social responsibility with the actual definition being the “obligation of an organization’s management towards the welfare and interests of the society in which it operates” (BusinessDictionary.com, 2013). The deontology theory states that someone’s actions are based on that is inherently right with no other calculations being taken into consideration such as consequences of the action. Deontology is based simply on principle and is justified through the structure of action, nature of reason, and the operation of the will (Boylan, 2009). Ethics and social responsibility play a significant role in the development of a strategic plan especially when considering stakeholders needs and agendas. Company’s primary mission is to make money and turn a profit for their stakeholders. This is done in many different ways and are outlined in the strategic plan.

The company however needs to ensure that their operations are ethical and not harmful to society or the community surrounding. Many companies walk a fine line between ethical and unethical when making efforts to perform for their stakeholders. Stakeholders primary objective is to make as much profit as possible and in most cases in the shortest amount of time possible. This is where companies are sometimes found crossing the line of ethics and social responsibility. This may include cutting corners to have a better competitive edge within the industry thus veering away from the company’s original strategic plan. In years past some companies have been caught conducting unethical operations in the name of profit (Wheelen & Hunger, 2010). The government has enacted legislation to make these activities less appealing to companies. Companies are now tasked with developing strategic agendas to accommodate their stakeholders needs and agendas while still considering ethics and social responsibility.

Essentially a company has to make it clear to stakeholders that their best interests are foremost but ethics and social responsibility will take precedence when developing a strategic plan to lead the company to success. The most popular and remembered company for overstepping ethical boundaries for stakeholders agendas would be Enron. Enron who began as a struggling energy provider climbed its way to the top of the food chain in the industry to essentially become a broker of energy. The company appeared to have a great deal of ethics and social responsibility from the outside looking in but things were not as they appeared after the company unraveled. It was found that top executives of the company were falsifying documents about earnings and essentially bleeding the company of all of its assets over the years until its inevitable fall.

This included making not so ethical business partnerships and making attempts to hide its debt through clever accounting tricks to avoid recording the information on balance sheets (Sims & Brinkmann, 2003). This all in an attempt to keep stock prices climbing to pad the pockets of the executives and stakeholders alike. Many steps could have been taken within Enron to avoid this situation while still staying successful. The first step would have been to develop a strategic plan that not only provided direction for the company but set milestones for the company to succeed.

Ethics and social responsibility come hand in hand when dealing with the world of business. When developing a strategic plan a company needs to ensure these areas are addressed and balanced when considering the needs and agendas of its stakeholders. This can as simple as keeping stakeholders informed that it is essential to act ethically for the long term health of the company. Enron is a prime example of the hardships a company as well as its employees and stakeholders can face when a company puts ethics and social responsibility to the side. This also reinforces the fact that companies should develop their strategic plan with these in mind and then sticking to the plan then taking appropriate steps to keep the plan updated to continue on the road to success. 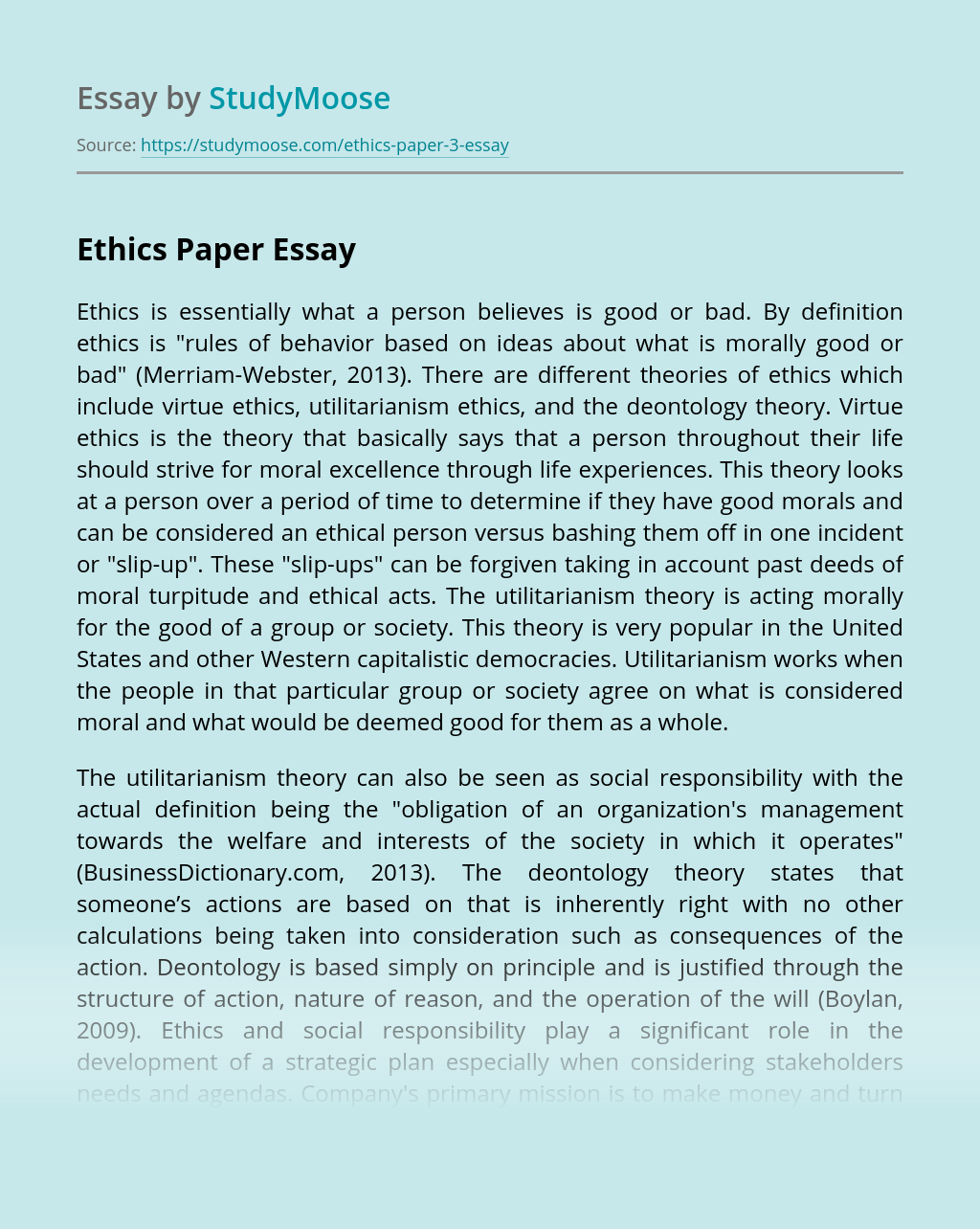 Positive Effects of Corporal Punishment Corporal punishment in regards to spanking has been used for hundreds of years in educational systems and in house holds and is still legal in all fifty states for parents to use in there household because it is an effective way to punish a child for wrong behavior. Even though...

The Lagoon is a story about a man who visits an old friend; they had been fighting in a war and became good friends since then. Nevertheless, a long time had passed without knowing much about each other, and these friends have a lot to talk about. The consequences of a selfish decision seem to...

“In the context of a code adopted by a profession or by a governmental or quasi-governmental organ to regulate that profession, an ethical code may be styled as a code of professional responsibility, which may dispense with difficult issues of what behavior is “ethical”. Some codes of ethics are often promulgated by the (quasi-) governmental...

In recent months, the Roanoke office has had complaints from four clients. Customer satisfaction is declining; this is partly due to low morale among the branch’s employees. It has come to my attention that some of the graphic designers and art directors feel that their ideas are not being taken seriously. All the while, employees...

View sample
Man Is Known by the Company He Keeps

Man is a social creature. None can live alone, away from the society of his fellow being, like shipwrecked Alexandra Selkirk who aspired for company in the lonely island. It is always very natural for him to seek the company of others. Even when all his immediate physical needs are met, he must have someone...