What is it about each of these studies that makes them unethical?

In the Milgram experiment the people who played the role known as the teachers, were intentionally tricked. Based on the Code of Conduct 2 where pretext may be ethically admissible. It was the way that Milgram did so that was not ethical by today’s standards. For human participants the codes cover topics such as deception, consent, withdrawal of data, confidentiality etc.

It is argued that conducting the experiment was unethical.

Don't use plagiarized sources. Get your custom essay on
“ Ethical Principles of Psychologists & Code of Conduct ”
Get custom paper
NEW! smart matching with writer

There is no clear evidence that Little Albert developed at rat phobia after maturity. Though he was never desensitized because of lack of time, life would sooner or later desensitize him anyway. The only evidence of being unethical was lack of consent by Little Albert’s since he was only a 9 month old baby, he couldn’t very well do so himself. Consent was given on his behalf by his parents and it was Little Albert whom endured distress while being involved in Watson’s experiment.

According to supporters of Elliott’s approach, the goal is to reach people’s sense of empathy and morality. Two professors of education, Goodson and Sikes say that what Elliot did was unethical because the exercise was psychologically and emotionally damaging. “She has been accused of scaring people, breaking the school rules, humiliating children, being domineering, angry and brainwashing.”4 Does the benefit of learning the results of these studies outweigh the potential harm of conducting the studies? Why or why not?

In the Milgram experiment there was psychological harm, which was not as bad as initially thought, because of Milgram debriefing the teacher immediately after the experiment.

With 40 year hindsight, this particular study does outweigh the potential benefit verses harm.

With Little Albert it was fear that was imposed on him, involuntarily. Being only 9 month old probably didn’t produce any permanent or longer term fears, the short term effects where not humane, especially to a 9 month old baby. The blue eyes and brown eyes experiment

It’s known as a lesson of a life time in history. When Elliot did the exercise 37 years ago, she changed the lives of the children in her class forever. The experiment, it’s self was not looked upon in Elliott replied, “Why are we so worried about the fragile egos of white children who experience a couple of hours of made-up racism one day when blacks experience real racism every day of their lives?”6 If you wanted to replicate these studies, what (if anything) could you do in order to meet the APA’s Code of Conduct and ethical standards?

If I wanted to duplicate The Milgram Experiment, I would do so based on the guidelines of the APA’s Code of Conduct and Ethical Standard. Starting with not withholding the truth how the experiment was to be conducted and make all parties involved aware. And allowing the participant’s to leave or quit the experiment at any time they became uncomfortable.

The only way to be able to do this experiment is with full knowledge and consent. A 9 month old baby couldn’t give that. The best way would be to allow only adults, 18 years and up.

Even though there was so much controversy in 1960. Times are different and have come a long way. Without doing the experiment on different age groups back then and now, I am not sure of how profound the outcome may be opposed to The Lesson of a Lifetime! 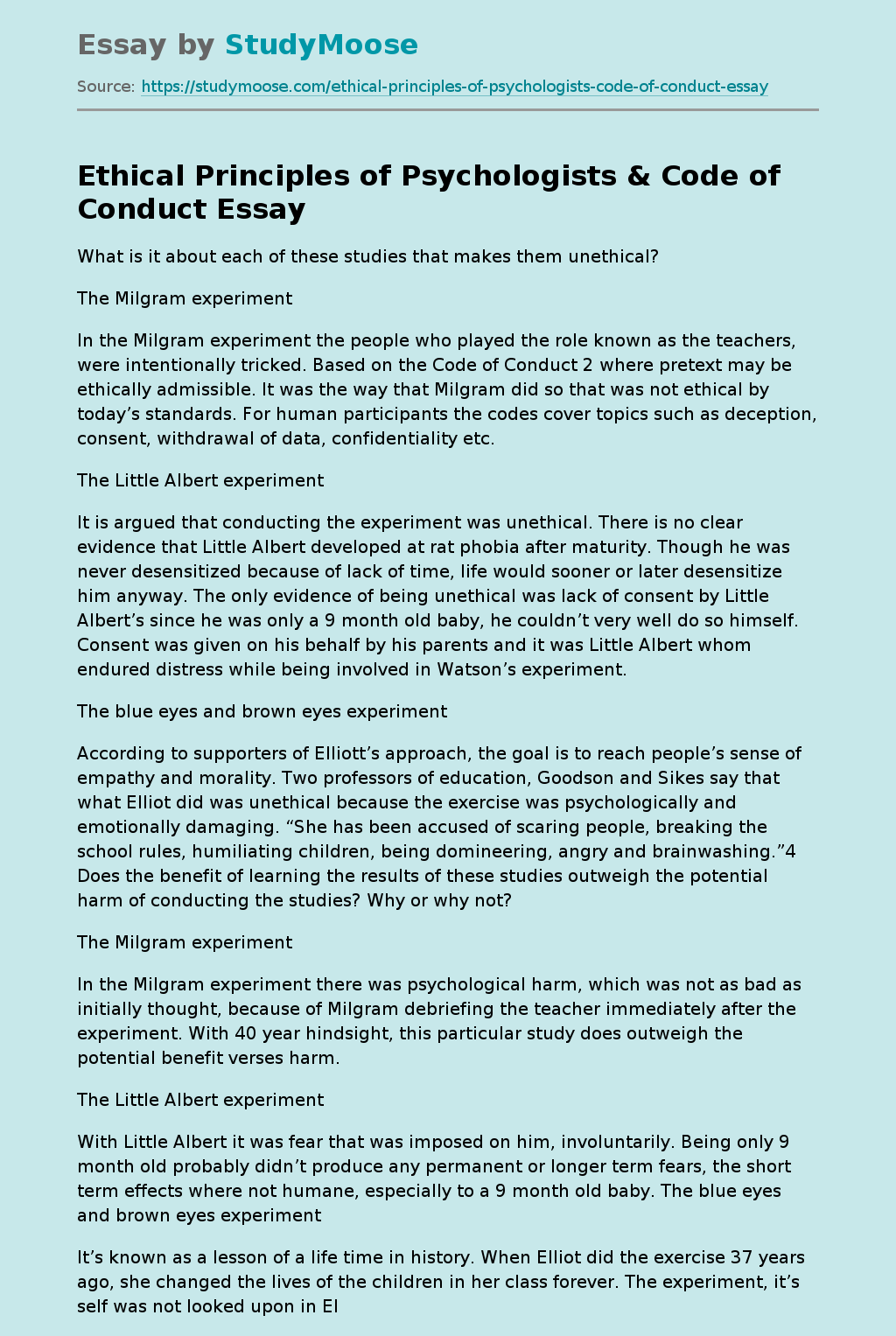