One of the most well-known and hugely debated bioethics cases in recent years is that of Terri Schindler Schiavo, who remained in a persistent vegetative state for 15 years and who only finally died when, after a long legal battle between her family and her husband, Michael Schiavo, the artificial nutrition treatment that has been sustaining her all these years was withdrawn in March of 2005 (Quill, 2005).

Terri had had problems with her weight since childhood and in time, had consequently developed an eating disorder.

Don't use plagiarized sources.
Get Your Custom Essay on Ethical Implications Of The Terri Schiavo Case Just from $13,9/Page

In February 25, 1990, she suffered from a cardiac arrest which doctors believed stemmed from a severe potassium imbalance triggered by bulimic purging. The lack of oxygen supply to her brain resulted in permanent damage to her cerebral cortex (Campo-Flores, 2006), the part of the brain that plays a central role in thought, perception and memory processes (MedicineNet. om, 2007).

In the months following her cardiac arrest, a CT scan of her brain revealed that her cerebral hemispheres have atrophied and her EEGs likewise showed a lack of higher cortical function, indicating that she had lapsed into a persistent vegetative state (PVS).

She retained some reflexive responses but showed “no signs of emotion, willful activity, or cognition” (Quill, 2005).

PVS cases stemming from such cortical damage have a poor prognosis – only a few were known to have regained minimal cognitive and motor functions after falling into such a state. Moreover, none of these patients suffered from brain damage that was as severe, nor were their periods of illness as long as Terri’s. Quill (2005) and Fine (2005) separately noted that videos of Terri, alongside with observations of other PVS patients, showing apparent alertness and movement can easily be misinterpreted to be significant by those unfamiliar with the condition.

This of course, included Terri’s family, who locked Michael Schiavo in a legal battle to oppose his petition to finally remove Terri’s feeding tube after years of futile efforts to revive her. What ensued was the longest-running right-to-die case in the U. S. , lasting for seven years and becoming a public fray that drew in the involvement of the Florida governor, the Congress, various activist groups and even the U. S. president (Campo-Flores, 2006). At the heart of this controversial case are the arguments for the right to life versus the right to die.

The right to life movement is based on the tenet that “every human being has the inherent right to life…[and] no one shall be arbitrarily deprived of life” (Human Rights Education Associates, 2002). Some who argued for Terri’s right to life acknowledged her medical condition and her guardian’s right to decide for her but nevertheless insisted that as a human being, she had the natural right to life (as opposed to legal right) as she wasn’t guilty of any crime and thus had every claim to her natural rights (Bennett and Kennedy, 2005).

The right to life is also central to other bioethical issues such as abortion and embryonic stem cell research; in fact passionate supporters of the Schindlers’ side include anti-abortion religious activists who stressed their belief that “life begins at conception and ends at natural death” (USA Today, 2005). Currently though, the definition of a natural death may not be as clear-cut as before considering the medical advances that have significantly improved the ability to prolong patients’ lives and thus has allowed more control over the circumstances and time of death (University of Minnesota Center for Bioethics, 1997).

Even the Roman Catholic Church recognizes this – bioethics professor Rev. J. Paris thought that some religious activists might have taken past papal statements out of context and referred to the pope’s 1980 Declaration on Euthanasia which states that “disproportionately burdensome measures to sustain life” need not be used and even maintained that this has been the Catholic moral tradition for four centuries.

Some would argue that artificial nutrition and hydration (ANH) does not qualify as such, but Rev. Paris cites the statement of the Brophy case judge that even ANH can be deemed to be an extraordinary measure, especially considering that it was used to sustain a patient for 15 years (Braiker, 2005). Likewise, Fr. Kevin O’Rourke’s argued that ANH is “futile…and excessively burdensome” since PVS patients are in a condition that prevents them from ever again pursuing the higher goals of life (Fine, 2005).

Given the extent and length of Terri’s medical condition, it may be safely said that her quality of life had so deteriorated that it had become ethically questionable to allow her to continue living in such a state. The University of Minnesota Center for Bioethics (1997) states that decisions on terminating treatment should be based on ethical values such as individual autonomy, beneficence and justice or equity, with individual autonomy being the primary concern.

Autonomy refers to conferring the decision-making process to the patient and that his/her consent or refusal to undergo medical treatments should be respected. This therefore holds that, although the preservation of life is given the utmost value and thus suggests the continuance of treatment, termination should still be carried out if it is the patient’s decision. However, obviously, this cannot be applied in the case of patients who lack the cognitive ability to make such choices and who had not left any written or oral directive. Such was the case with Terri Schiavo.

In such situations, the closest family members are consulted and their “substituted judgment” is made the basis for the course of action to be taken. However, as was evident, the Schindlers and Michael Schiavo eventually became conflicted regarding this. After years of experimental therapy to rehabilitate Terri, Michael finally accepted the diagnosis that her chance for recovery was virtually zero (Campo-Flores, 2006) and decided to petition for the removal of her feeding tube as he believed Terri wouldn’t have wanted to continue living that way.

However, her family refused to accept the neurologists’ diagnosis and insisted that her condition might still improve. This was where the legal battle started, since Michael, being the spouse, was considered the legal guardian under Florida law and being the designated health care proxy, had the right to decide for Terri (Quill, 2005). A precedent case that affirms the right of surrogate decision makers to decide in behalf of incapacitated patients was that of Nancy Cruzan (Quill, 2005).

Cruzan was 25 years old when she figured in a vehicular accident in 1983. She was in a persistent vegetative state for five years before her family finally accepted her fate and filed a legal petition to have the hospital remove her feeding tube. Their initial efforts were turned down but they eventually won the case; she died in 1990 with her headstone reading “born July 20, 1957”, “departed January 11, 1983” (the day of her accident); and “at peace December 26, 1990” (the day she finally died following the removal of her feeding tube).

This makes a strong statement which, albeit not in the traditional sense, may be seen as to be in support of the value of beneficence, or the promotion of the good of the patient. This of course is contentious, since PVS patients lack consciousness and show no evidence of suffering. On one side it may be argued that since they are not suffering any pain then there would be no harm in continuing life-sustaining treatment, but on the other hand there is likewise no moral obligation to keep them on treatments that are, in their cases, clearly nonbeneficial.

The withdrawal of ANH causes patients to slip into a coma first before death sets in, and as far as medical evidences are concerned, there is no indication of pain or suffering. This would therefore be a humane way of letting someone go and is in fact supported by a 1990 statement of the Texas Catholic Bishops upholding the moral soundness of withholding ANH from a permanently vegetative patient, believing that such an action does not mean abandoning a person but rather accepting that he/she has “come to the end of his or her pilgrimage and should not be impeded from taking the final step” (Fine, 2005).

Although it has to be conceded that both the Schindlers and Michael Schiavo simply acted on what they believe was in Terri’s best interests, the fact that her case became this drawn-out legal battle serves to illustrate what several clinical ethicists believe (Fine, 2005; Quill, 2005): that it would probably have served Terri Schiavo better if ethical consultations were made in an effort to try and resolve the conflict first rather than taking it straight to the courtroom, as in the end Terri’s case became a public spectacle wherein the welfare of the very individual at the center of the conflict seemed to have become lost amid all the debates and issues. 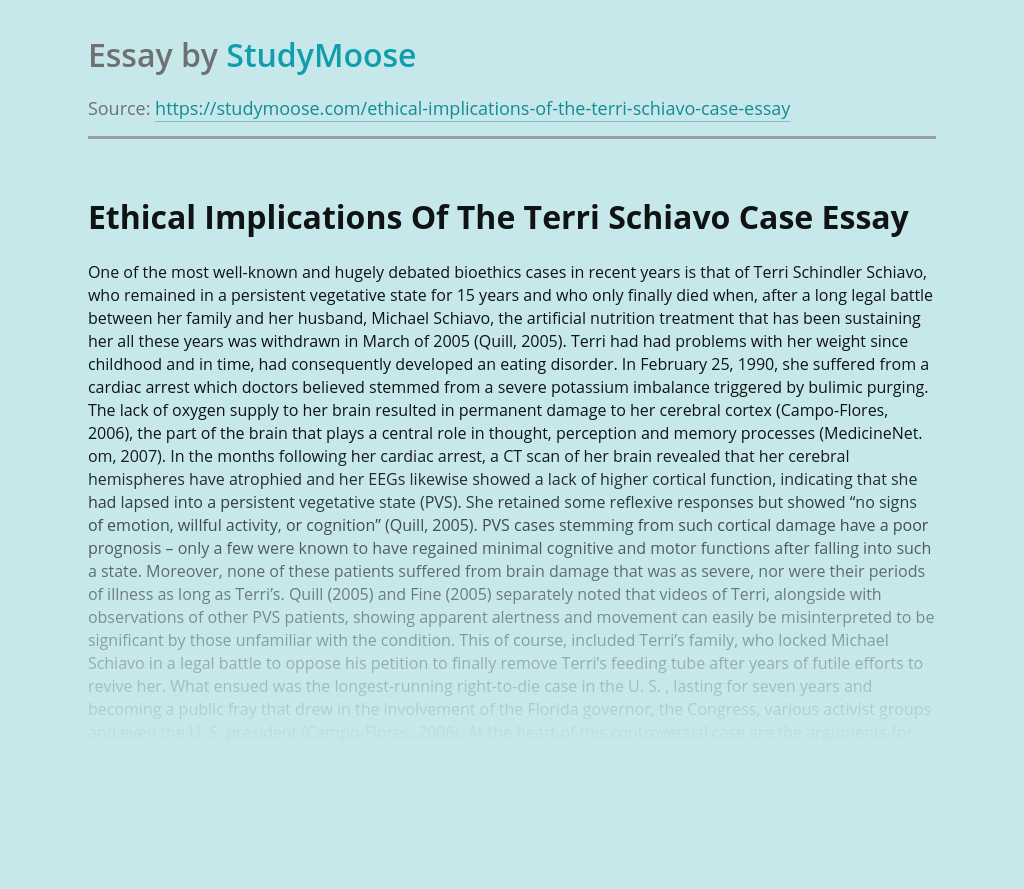 Labour’s first major reform to the UK constitution was the introduction of the Human Rights Act (1998). This act has safeguarded rights such as the right to life and the right to a fair trial. Prior to this act, our human rights were just included in common law, which can be easily changed. And so,...

Executive summary This report consists of the characteristics and comparison between the leadership qualities of Bill Gates and Richard Branson. Here it is talked about how Costs Gates carryout to be an effective business entrepreneur being a democratic leader with a high innovative vision. In Addition, Richard Branson as an enjoyable complete leader who prospered...

Get Essay
Multiple Methods of Nursing

7 In this essay I will be looking at 2 schools of thought Positivist (Realism/neoliberalism) and the post positivist (social constructivism) the latter emerging from the rejection of the former. As one can imagine with multiple theories there is room for debate, which makes analysing situations in international relations sometimes rather complex. Positivist theories aim...

Many crime problems in my area which are creating difficulties for peoples day by day. I have seen many crimes have been done in my area. * Snatching * Drugs dealing * Shop lifting * Stabbing * Gang fighting * Theft and robbed * The area where I live is ok; I have been robbed...