The implications for the business and stakeholders

Don't use plagiarized sources. Get your custom essay on
“ The implications for the business and stakeholders ”
Get custom paper
NEW! smart matching with writer

Customers point of view is to buy products that are cheap and of good quality. Without the customers, Primark as a company would not survive because in all situations, customers are the main priority and their needs have to come first. Customers are vital stakeholders because they can instantly choose to spend their money on another company that could turn out to be a competitor for example, Primark former customers could start shopping at New Look.

Communities: The community is an important stakeholder for Primark because they welcome the company to their area and responsible for publicizing within the area. Primark has trust on their community as they are an essential part of the company. The community also helps Primark with advertising has they give a word of mouth about their business and without the community, Primark has no trust.

As a result of Primark’s unethical behaviour, communities will find it negative to welcome a company like Primark who’s unethical. The reason why Primark being unethical will damage communities is because a bad image will be building for representing or collaborating with the company. Although it will be positive for the European Union community as they won’t have to pay for expensive clothes because Primark retail it for cheap, it will negatively affect the Bangladesh community. Primark’s unethical behaviour will affect the Bangladesh community because most the families would have to work for them because there’s lack of jobs which will mean that to earn more cash; children from 3 years old get dragged into the hard labour world. Government: Government is one of Primark’s stakeholders because they need to see whether the business is focused on their objectives. If Primark is doing well, it helps the Government as they produce wealth and employment.

Primark’s unethical behaviour will affect the Government in a negative way. The reason for that is because the government is responsible for the businesses in a country and for Primark doing unethical things, it will damage their reputation. An example of why the government reputation will be damage by Primark’s unethical behaviour is about their treatment of workers. Primark don’t treat their workers with the respect and dignity deserved and that will affect the Government’s image as they failed to issue that problem. Shareholders: A Shareholder is an external stakeholder. Shareholders are part of Primark’s stakeholders because they possess different shares within the company. Shareholders will be affected by Primark’s unethical behaviour in a positive way. The reason for that is because Primark sell their product such as: clothes and garments at a cheap price which will attract customers because they can purchase so many products knowing that the price is cheap.

Primark’s strategy of cheap clothes will also attract customers because they sell high fashion products that in other stores such as: New Look or H&M are expensive and customers will profit from the bargain which will increase their sales and the more money that shareholders will be receiving. Suppliers: Suppliers are stakeholders because they provide the products for Primark that are required to be sold. Primark’s unethical behaviour will affect suppliers in a positive and negative way. The reason why their unethical behaviour will heavily affect the suppliers in a negative way is because they will have a bad image as they are also a part of Primark’s representation as a company and people will think that the suppliers find it okay to practice unethical procedures. Primark’s unethical behaviour will also affect the suppliers in a positive way because the company will be producing money and the more profits that come, the better pay that suppliers get for their deliveries.

I will now explain how Primark’s unethical business activities impact on Primark itself as a company. Primark has had a reputation of being unethical as they pay their workers little money and after the disaster in Bangladesh where a factory that was full of Primark’s workers collapsed, there’s been some questioning about their treatment. Since the disaster in Bangladesh, Primark has built a bad image/reputation and that’s bad because it will cause the company a negative publicity. Primark may not know it but their unethical behaviour will cause them to loss of money especially when they hold a clearance day where loads of products are on sale. The reason for that is because customers will not want to buy clothes that are made from small kids from the age of three and get paid a ridiculous amount of money.

Suppliers don’t want anything to do with Primark unethical behaviour as their appearance and reputation will be affected negatively meanwhile, Trade unions will benefit from it especially if is the EU (Europe) because employees that work in the Primark stores in which they are located across Europe receive good treatment and excellent pay. Shareholders will find it as an advantage for Primark to be unethical by paying their workers money such as: 52 pence an hour because the finished products will then be sold for a cheap price which will generate more money for shareholders. Furthermore, communities and government don’t really benefit from Primark being unethical.

The implications for the business and stakeholders. (2016, Sep 22). Retrieved from https://studymoose.com/the-implications-for-the-business-and-stakeholders-essay 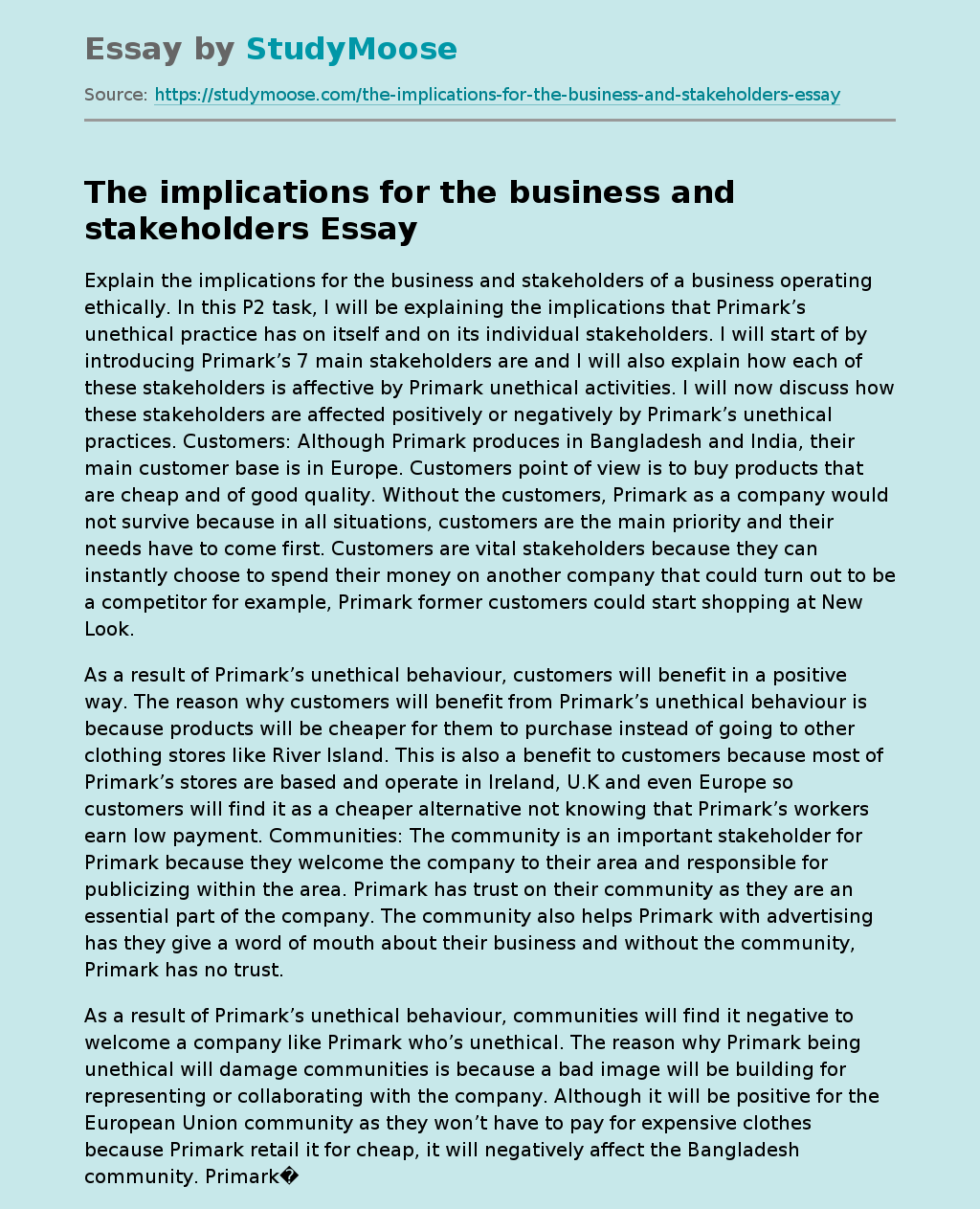