In society today, “full-time working women earn just 77 cents for every dollar a man earns,” (whitehouse.gov), for putting in same amount of effort. This injustice is unacceptable in this day in age when women are more involved in society, both politically and socially, than ever before. Women should have equal pay to men for the same amount of work they do because it is not only their right but they have the education to support their position in the workforce.

Don't use plagiarized sources. Get your custom essay on
“ Equal Pay for Equal Work ”
Get custom paper
NEW! smart matching with writer

Women are as educated or in some cases even more educated than men. Data collected in studies revealed ,”25-34 year old women were 21 percent more likely than men to be a college graduate” (whitehouse.gov) in 2013. If women are graduating college at a greater rate than men, then it is illogical for females to be paid less than men, who are increasingly becoming less qualified themselves when compared to the female population. Not only are women graduating undergraduate college but, “women account for almost half of students in JD, MBA, and MD programs” (whitehouse.

gov) in recent years. Some might argue that, although women are getting educated, if they want to be paid more, then they need to start choosing career paths that suit their goal salary.

But the fact of the matter is, “ college educated women ages 30-34 are now as likely to be employed as doctors, dentists, lawyers, professors, managers, and scientist as traditionally female-dominated occupations such as teachers, nurses, librarians, secretaries, or social worker,” (whitehouse.gov), and yet they are still getting paid less than men.

So, the problem is not that women are not striving for a high paying career, rather their effort is not being appreciated. Women are not only qualified to be awarded the same salary as men, but it is their right as well. In 1963 the Equal Pay Act which “prohibits covered employers from discriminating on the basis of sex by paying unequal wages for equal work,” (Sobieski) was signed into law by former President John F. Kennedy. This means that neglecting to pay a female worker the same as a male worker, who has the same occupation, is technically against the law. It is important to understand that is act does not elevate the female population over men, but fairly brings both genders to an equal playing field in the workforce.

Another law that can support this injustice is the “Public Law 88-352” (arhives.gov) which was passed by Congress in 1964. This civil right also” forbade discrimination on the basis of sex” (arhives.gov) in the workforce. As the data exposes, this prejudice against women is uncalled for and ultimately illegal. This social issue is incredibly unjust and belittling to the female population. It needs to be dealt with immediately. Women are not only as competent and educated as men, but they also have the legal right to get paid equally to men. Yet, every day, women are being ignored and unappreciated for all the work and effort they put into society. It is only possible for women to overcome this unfair treatment, if they take action and fight for what they deserve. Women need to be informed of their rights presented in acts such as the Equal Pay Act, and stand up for themselves when these rights are violated. 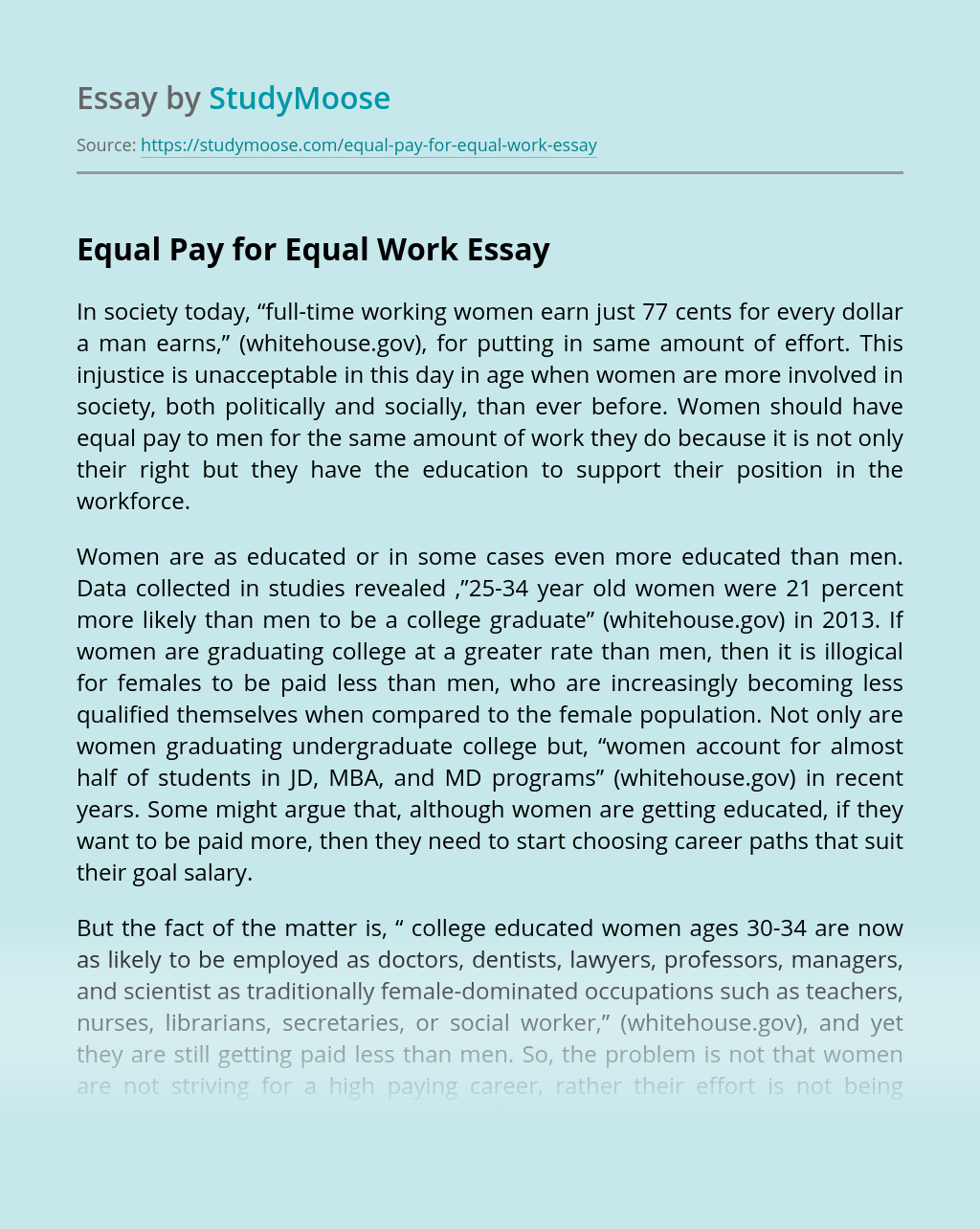