L. M. Montgomery once stated “.. we pay a price for everything we get or take in this world.. ”. What he is saying is the choices we make in life, whether they be good or bad, consequences are received. These consequences don’t necessarily have to be bad nor have to be good on your part. I find this quote to be accurate. In To Kill A Mockingbird by Harper Lee and Of Mice and Men by John Steinbeck, Montgomery’s words are proven true.

Don't use plagiarized sources.
Get Your Custom Essay on We Pay a Price for Everything We Gave or Take in This World Just from $13,9/Page

Scout and Jem Finch, the protagonists of the story To Kill A Mockingbird, want to make contact with “Boo” Radley. According to people in Maycomb, Boo was infamous for peering through people’s windows at night and eating animals. By hearing this, the kids decided it would be intriguing to make contact with him. Scout and Jem were told to stay away from the Radley property from their father, Atticus, and many others in the town of Maycomb.

They disobeyed these requests.

By doing so, Scout and Jem made a new friend who in the end, winds up saving their lives. They learned that Arthur “Boo” Radley was not at all what people perceived him as. In this case, the consequence was not a bad thing. They gained something from this encounter. Of Mice and Men is another good example of this quote. Lenny and George find a paying job so they can one day live the American dream. On their journey, they meet others who share the same dream as them. Lenny has a mild mental disability and relies on George.

Because of his condition, he was unaware of the amount of physical strength he had, and killed a woman. In return, he too was killed, thus showing that you do pay a price for your actions. In this case, the consequence was more of a punishment than a reward. I feel that both stories share the same theme, which is very much connected to the quote stated by L. M Montgomery. The protagonists in each story received a consequence for their actions; One was positive, but unfortunately the other was not.

We Pay a Price for Everything We Gave or Take in This World. (2017, Jan 03). Retrieved from https://studymoose.com/we-pay-a-price-for-everything-we-gave-or-take-in-this-world-essay 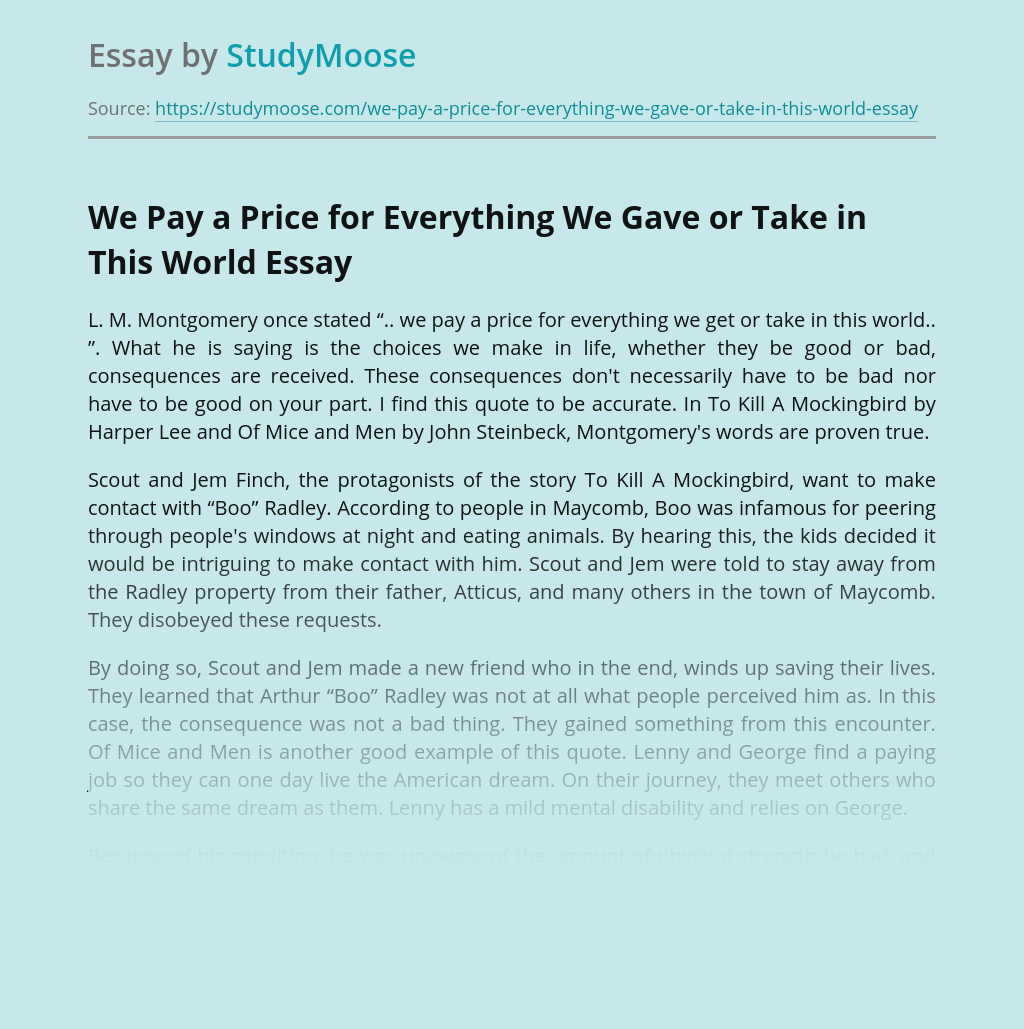 True West is a classic of Sam Shepard written in 1981. On the surface, it is mostly about a sibling rivalry of two brothers though there is more to it than that. The comedy, which to some is not very funny, seems to follow the regular standards of plays. The construction of the basic dialogue...

Arthur Miller was born in New York City on October 17, 1915. Miller composed The Crucible in the early 1950’s and it used the Salem Witchcraft trials of 1692 as a response to the anti-communist “witch hunts” to which miller was accused of. Miller believed that the madness surrounding the witchcraft trials was similar to...

The two poems I will be comparing and contrasting in this essay are two of William Shakespeare’s most famous sonnets. Sonnets numbered 18, ‘Shall I compare thee…’ and 116, ‘Let me not.’ Both of these poems deal with the subject of love but each poem deals with its subject matter in a slightly different manner....

View sample
Lord of the Flies by William Goldings: Keywords

Lord of the Flies was written in 1954 as William Goldings debut novel. It was written and set around the time of the Second World War. The keywords in the essay title are ‘order’ and ‘deteriorates, therefore in this essay I intend to look at first how order is established and will then show how...

View sample
"A Rose for Emily" by William Faulkner

The tone in “A Rose for Emily” by William Faulkner expresses a sense of curiosity and fear. The curiosity of the woman’s life and the fear of the unknown is also established with the author’s diction. The two tones even roll over to the point of view of the story (or point of views for...