In this short story, Equal Opportunity, written by Walter Mosely, Socrates Furtlow, an ex-convict, faces the dilemma of getting a job. Socrates served 27 years in prison after killing two of his friends while drunken. Furtlow was now living life as a bumb who went around selling old bottles and cans to make a living. This story tells his struggle to find honorable work as a black man in society because of his background. He ended up lying on his application because he was afraid of what people might think.

Don't use plagiarized sources. Get your custom essay on
“ Analysis of “Equal Opportunity” Written by Walter Mosely ”
Get custom paper
NEW! smart matching with writer

Although there was discrimination and disrespect not being completely honest with people may come back to haunt you later.

A 58 year-old man who hadn’t worked in 37 years would have a hard time finding a job as it is the fact that Socrates was an African American didn’t make anything easier. Socrates assumed places of business in his home neighborhood, knowing his background, wouldn’t even think of hiring him. So Socrates traveled approximately 14 miles and 3 bus transfers from his apartment in Watts, to a Bounty Supermarket to try and get a job.

He had been practicing for a week on how he would ask for his job application.

Though he was a murderer and not a thief, as he entered the store, he wondered what the workers would think if they knew of his prison background. The assistant manager, Anton a young white man came up to Socrates and asked if could help him. Socrates felt as though he was being miss treated from the get go.

After Socrates asked for “an application” Anton played dumb acting as though he didn’t understand what kind of application he was asking for.

Once Socrates made it clear he was there for a “job application” Anton had yet another insulting question, “Uh. How old are you, sir?” (p. 2626) Being a man of imprisonment of twenty-seven years, Socrates knew his rights and knew that it was unlawful to discriminate against someone by their age or race. Anton continued to say that they didn’t have any openings at the time and made it clear that he wasn’t going to get an application. Socrates also made it clear that he wasn’t going to be turned away so easily.

“I know what you said. But first you looked at my chothes and at my bald head. First yo’ eyes said that this is some kinda old hobo and what do he want here when it ain’t bottle redemption time.” (Gates and McKay p. 2626) Everyone should have an equal opportunity in getting a job and at least a fair chance with an application. After Socrates and Anton discussed their rights and the law the assistant manager went to the main office to fetch and application.

The elevated office looked over all the checkout counters and where Socrates stood waiting. Socrates was then center of attention to all the bag boys and checkers as they all knew their boss, Anton was unhappy. Anton and an older white woman exchanged a few words then she handed him the application and he stormed back down to Socrates. Rudely handing him the app Anton was about to go on with his day but Socrates wanted a pencil to fill it out and give it back.

He had come a long way to turn in an application not just receive a sheet of paper and wasn’t leaving until he did so. Thirty minutes later Socrates stood at the foot of the stairs leading up to the main office with his almost completed application in hand. Nearly forty minutes passed and he knew they could see him and he could see them but he waited patiently, on the outside, though inside he was thinking of throwing a brick through the window.

He had a few questions for the manager, Ms. Halley Grimes, when she finally came down to take the application but she rudely tried to brush my off as though she were too busy. She told him they would give him a call if it went through the main office and came back fine. He then told her he had no phone and it would be better if they wrote to him, but she unwilling to help in any way explained that without a phone she could do no more for him. He begged for her to just send it in anyway and he would find a way to be in touch. So for five consecutive days Socrates took three busses to the Bounty Supermarket to ask if they had heard from the head office.

That is probably the most adverse way of showing the meaning of “equal opportunity”. The two men explained why he would not be able to work at that location because Ms. Grimes was afraid of him, but that they may have a job in Santa Monica. Lying on an application is a crime in itself. Socrates didn’t fill in one question on his application know if they knew what he was he wouldn’t have a chance at a job.

The two men noticed the blank question and confronted Socrates. After all his talk about equal opportunity and the law, he lied and said it was just an honest mistake and that he was clean. So the two men gave him the job in Santa Monica and he would finally have a paycheck coming in, that is until the untold comes back to bite him in the rear. You can be fired just as fast as you were hired, or slow in his case, if you lie on an application.

This story begins a series of confrontations (with violence lying just below the surface) that explore both the necessity and the irony of equal opportunity.

Analysis of "Equal Opportunity" Written by Walter Mosely. (2016, May 23). Retrieved from https://studymoose.com/equal-opportunity-written-by-walter-mosely-essay 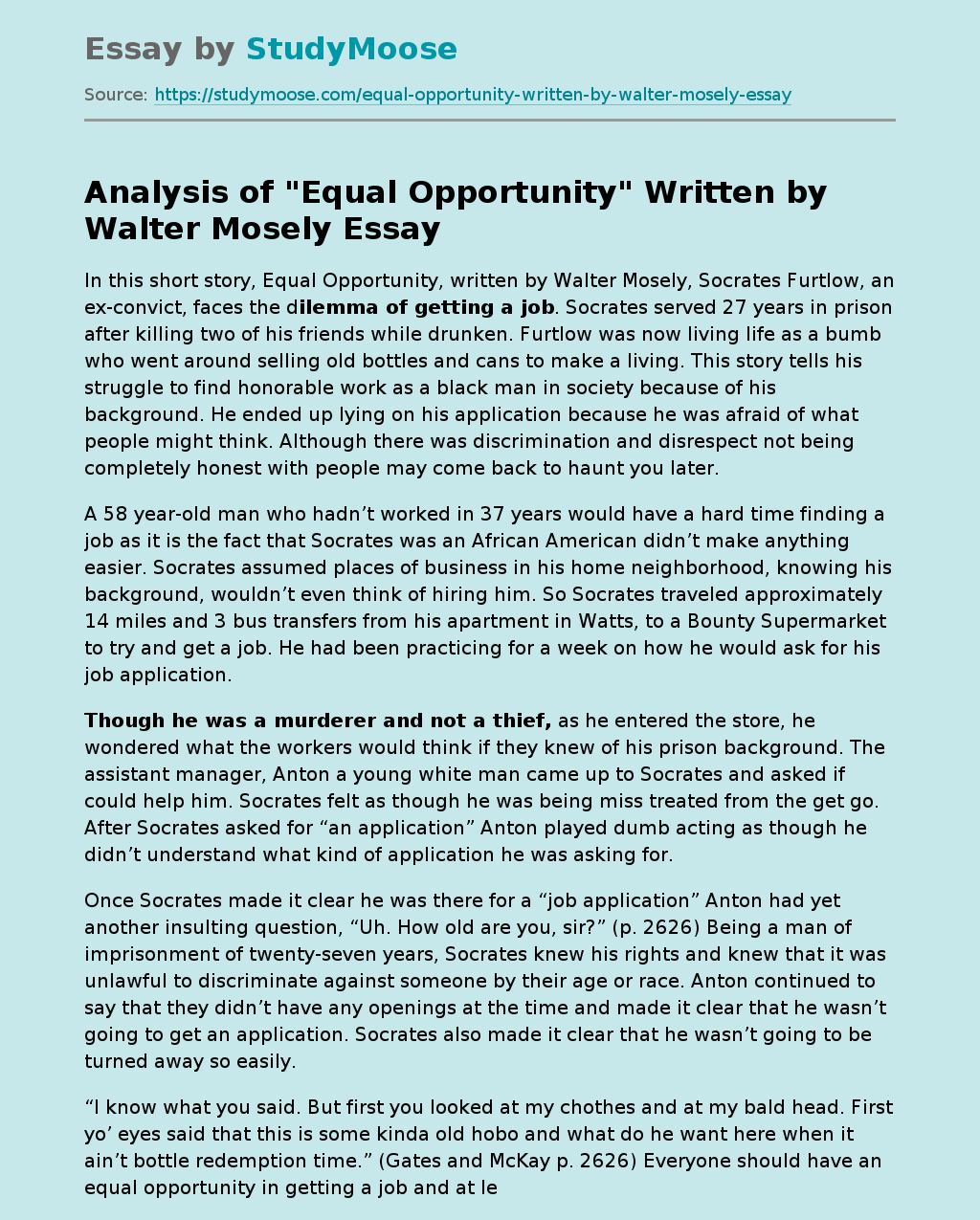