America: The Land of “Equal” Opportunity

Although the American society that we live in today prides itself on equal job opportunity and progression, it is easy to see behind the deceiving façade. Women have always been viewed as the less dominant gender due to the patriarchy that is provided by society. In fact, women are still making a measly seventy-seven cents for every dollar that a man makes, and the gap is even worse for African-American or Latina women working (Huffington). Even with women having a greater entry into the workforce in recent years, their pay is still considerably less than a man’s (Conley 312).

Don't use plagiarized sources. Get your custom essay on
“ America: The Land of “Equal” Opportunity ”
Get custom paper
NEW! smart matching with writer

Due to this suffering pay disparity, the women in the workplace are forced to suffer through many barriers that are not thought of and are unheard of by men. It is difficult to break through the glass ceiling of the corporate world for women to get to a higher job title, they are placed into the category of “caregiver” for children, and finally they are faced with sexual harassment in the workplace.

This invisible limit on women’s climb up the corporate ladder poses as a very difficult hurdle to dodge towards success in the work place (Conley 315). If a person simply cannot go any further in their job, why would they bother to put forth more effort? In order for a company to succeed, it is necessary for its employers to go above and beyond what they are expected to do; when a person feels that they no longer must do this, however, the bare minimum will most likely be expected of these people.

Women make up 46.5 percent of the workforce in America, yet they only occupy less than 8 percent of the head corporate positions (The Conundrum). This number is astounding based on the percentage of women that make up the workforce in total, and is frustrating for the women who are well-equipped for the job at hand. If this glass ceiling barrier were to be broken, the workforce would have a more equal balance of corporate heads, and would most likely have a more productive workforce because of this. With everyone is striving to make it to the top, all will be going further than what is expected of them. Based on the glass ceiling provided to women in the workforce, a barrier is created that must be broken through to improve productivity and equality within the work place.

Women in society today are seen as the “housewives”. Due to the gender roles provided by society from birth, women are taught to behave and act a certain way within the house. They are thought of as child bearers, cooks, caregivers, and the person who is responsible for other chores around the house; Arlie Hochschild calls this effect the second shift (Conley 469). Due to this effect on society, women may be seen as less expected to work full-time, when in fact, only 3 percent of women managers said that family responsibilities were a main obstacle in their career (Empowering Women). With women being placed into a set category and role, this causes men to see them as weak and unable to work full-time. This barrier could be broken by a more forward way of thinking towards women’s roles in society. There are plenty of women who do not fit the role of housewife, and by placing them into this role, they are being unrightfully judged. With a more forward way of thinking, this issue of set role can be solved within the work place. Sexual harassment is another barrier which women must face in the work force that most men would not.

This harassment comes as an illegal discrimination in many different forms that is intended to make women feel uncomfortable and not welcome (Conley 313). The act of harassment can make women feel very unequal and strange in the workplace, discouraging them from climbing up the corporate ladder. Men do this to subordinate the women in the society, giving them more power, and in most cases they are successful in doing so. In fact, 90 percent of large corporations reported sexual harassment complaints by women employees (Empowering Women). If sexual harassment were more discouraged in the work place, women would feel more confident in climbing up the social ladder without the constant fear of sexual ridicule. With the banning of sexual harassment, the work place would be a safer and more equal environment to work in.

America: The Land of “Equal” Opportunity. (2016, May 22). Retrieved from https://studymoose.com/america-the-land-of-equal-opportunity-essay 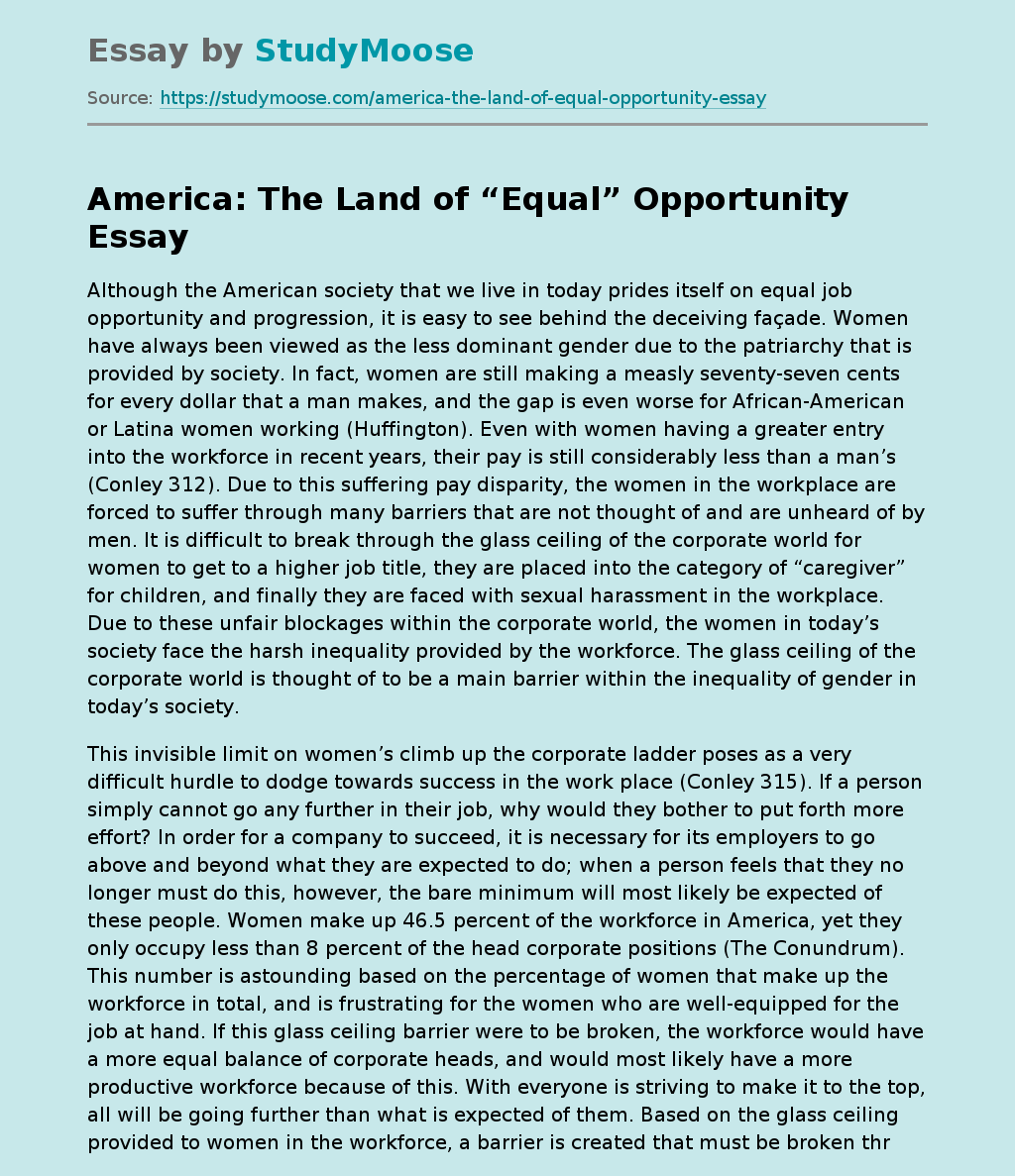