The Values of the Work Ethic and Equal Opportunity

The play “Glengarry Glen Ross,” by David Mamet, tells of a real-estate company in the early 1980’s that is currently having a sales competition among the salesman in the office. The men are all not only trying to reach their own personal success, but simultaneously trying to construct their coworker’s failure. All values of work ethic and equal opportunity are challenged in this play by showing the characters, fueled by greed, trying to cheat their way to the top instead of working hard for it and finding loopholes to get what they desire.

Don't use plagiarized sources. Get your custom essay on
“ The Values of the Work Ethic and Equal Opportunity ”
Get custom paper
NEW! smart matching with writer

The first significant aspect that expresses this behavior is early on in the first act of the play. Levene and Williamson are sitting in the restaurant having a discussion about the sales leads. Levene is upset with Williamson because he won’t give him the premium leads, which Levene feels will put him on the board to be a top seller in the office. After an extensive effort by Levene to try and convince Williamson to give him the leads, he is rejected.

This is when Levene results to bribery. Levene starts the bribery with “I’ll give you ten percent” (1004) which eventually escalades into Williamson counteroffing “Twenty percent…and fifty bucks a lead” (1004). This moment of Levene and Williamson shows a desperate act of bribery toward his superior to try and get what he wants and also an unethical act by Williamson as he is taking bribes from one of his employees that he oversees. This is helping Levene cheat the system and giving others an unequal opportunity to the premium leads.

Another notable aspect of the challenging of work ethic and equal opportunity is presented in the Moss-Aaronow dialogue in act 1, scene 2. Moss, one of the less successful salesman in the office, is explaining how the whole system of the competition is wrong and says “should do something to them.” (1009) which begins the implication of committing a crime in the office. As the two men continue to “talk” about it, it is exposed that Moss wants to have the office robbed to steal the Glengarry Highlands Leads and sell them to Jerry Graff. This moment shows Moss trying to jump to the top of the figurative “hard work” ladder, rather than climbing, and ruin anyone elses chance at this same success. Moss’ history of being low on the ladder in the office is what stemmed his idea to cheat the system and find a way for him to be successful without having to work for it. Not only did he come up with this plan to cheat the system and commit a crime, but he has acquired the idea to have Aaronow do his dirty work for him instead.

Next in this dialogue, Moss tells Aaronow his full plan of Aaronow stealing the leads while Moss is off at the movies with a friend and returning to the hotel to create his alibi. Aaronow doesn’t seem to be going for it, as he is a very meek man. In response to this, Moss sets up his plot even further by blackmailing Aaronow saying that if he did not commit the robbery, Moss would do it himself and potentially get caught. When he was caught, he would tell the cops that Aaronow was his accomplice and helped him come up with the plan in the chinese restaurant that day. Moss then tells Aaronow that he would get a cut of the five thousand dollars he would sell the leads to Graff for. Aaronow questions his motives behind the crime and reiterates that they were going to get five thousand dollars out of the deal, and Moss says “I lied. Alright? My end is my business. Your end’s twenty-five. In or out. You tell me, you’re out you take the consequences.” (1012). This line is an excellent example of Moss lying, manipulating, and using blackmail against a coworker to set up the perfect crime and rob the business in rebellion of the sales competition of his bosses.

Conclusively, this play by Mamet has ample examples of literary attacks toward typical business practices and shows an untypical group of men who aren’t driven by the ‘American Dream’ work ethic. The men who work here are being led by a business who isn’t built on a foundation of morals and ethics either, so it is no surprise that the men of the office eventually resort to desperation and cheating. This play is the very definition of unethical and should not be taken as a good example to anyone wanting to be successful in the business world.

The Values of the Work Ethic and Equal Opportunity. (2021, Oct 08). Retrieved from https://studymoose.com/the-values-of-the-work-ethic-and-equal-opportunity-essay 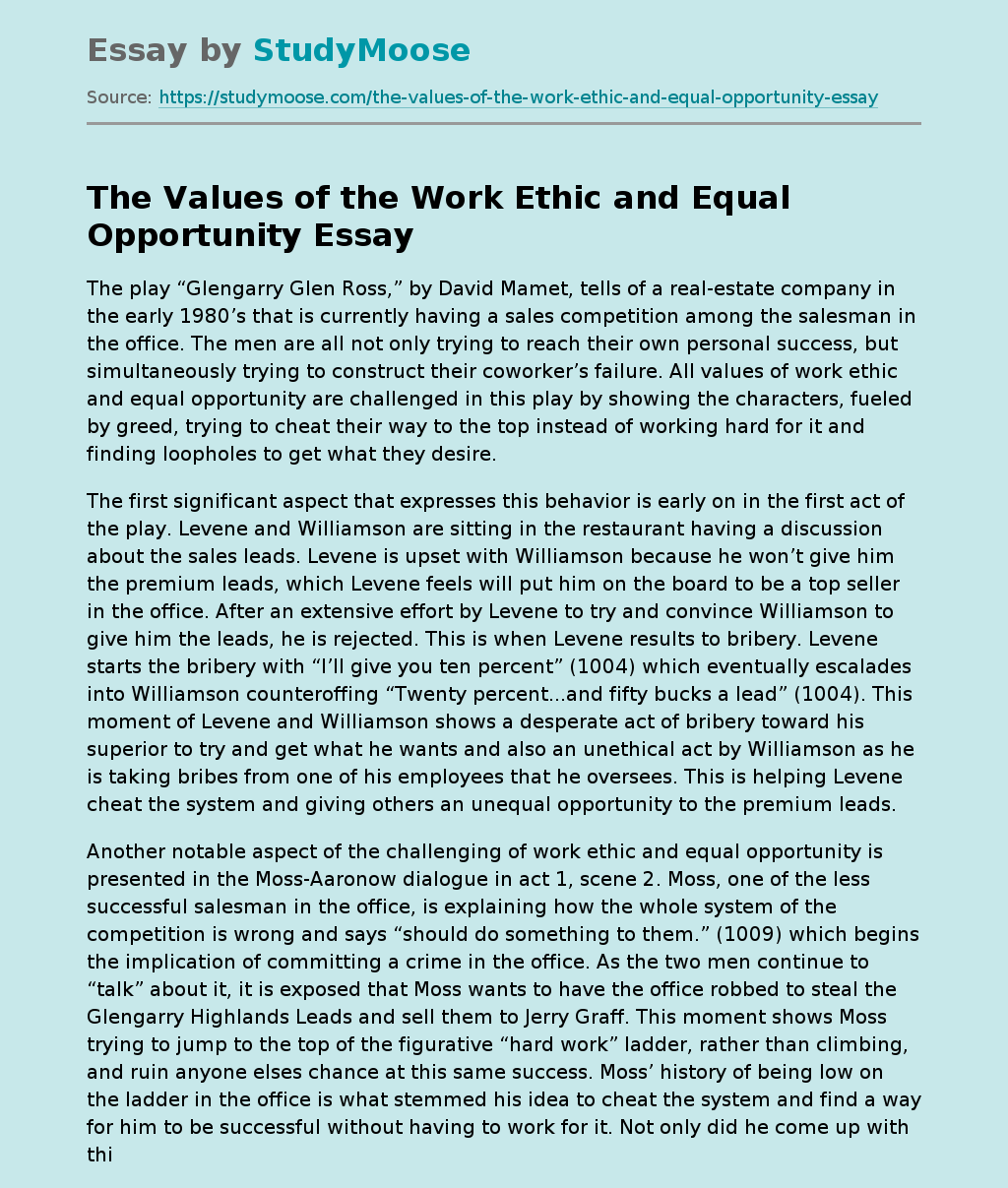