Importance of Ethic in Business

I would like to start this paper by describing my journey with this course namely ‘Ethics in Business’. I still remember the pre-conceptions I had about this course.I had assumed in my head that it was going to be one preachy subject where we would be taught the pre-set notions of what is right and acceptable vs what is not. But to my surprise, in the first session itself, Professor Jagdish Rattnani clarified the intent of teaching ethics in class.

Don't use plagiarized sources. Get your custom essay on
“ Importance of Ethic in Business ”
Get custom paper
NEW! smart matching with writer

We were informed that during the course, we would not be given a set of rules we need to apply to reach a conclusion, rather we would be guided with real case studies to be better equipped to form an opinion of our own.After the first session, my expectations from and my excitement for this journey increased to a level from where there was no turning back.

The entire journey involving endless discussions and mind-boggling questions is important for me not only because I have learnt new things in this duration, but also because I have ‘Un’learnt many things too.

From here, I have divided this paper into two sections. The first section talks about my overall learnings from the subject and the course. In the second section, I will describe my viewpoint on two different components of the course. First, a real-life case that was discussed. Then I will link a new research study I found interesting with the “four spheres” taught in the class.

It is ‘Okay’ to be on the side you feel is right, even if others are against it: I feel that throughout this course, I have learnt that it is not possible to please everyone everytime we take a decision.

Therefore, the most important thing that we should think about is if we ourselves are satisfied. That is, if our own conscience allows us to take that particular stand. For instance, we read in the Apple iPhone case how Tim Cook took a stance of choosing privacy over safety in the war of ‘right vs right’. Many who are of the view opposite to that of Cook would have tried their best to change his stance. The Obama administration, considered to be once the most powerful in the world, itself pressurised Apple to give up on its strict stance to protect safety. But even then, Cook and his corporation stood astir. This, I believe, taught me that there might be instance in my own life when I might not agree with a majority. But the important thing is that I show the courage and have the heart to take a stand.

Disrespecting other people’s opinions is not required to prove respect for yours: Throughout the course, there were many discussions in class. Bright minds of the country discussing and debating over issues of what is right and wrong. But what I really liked was the calmness and open-mindedness with which each person listened to the views of others irrespective of the sides they had chosen. There might have been very few, if any, instances where people would have had any heated argument.

This taught me how important it is to not only be heard, but also to hear. Being receptive of newer perspectives makes us revisit and re-evaluate our own beliefs.

If after listening to opinions unbiasedly, we feel that we agree with the new perspective we can make amends to what we had initially believed in, and if we don’t agree, then our confidence in our initial belief strengthens even more. Either way, it is a win-win.

It is not always required to reach a conclusion: Not every situation can be fit into the clear segregation of black and white. Sometimes, we have to be satisfied with a grey. Thanks to the real case studies discussed during the sessions, I got to brainstorm a lot over which side I wanted to take. But sometimes even several rigorous rounds of classroom and out-of-classroom discussions led to no conclusion. From this, I learnt that not always can we decide which side we want to be on. These are the times when we become greedy and don’t want to let go of either of the sides. But one should not get too hard on him/herself. It is just fine to accept things the way they are.

What I think… First of all, I would really like to talk about Mridalini’s case where she had received a Diwali gift from one of the suppliers. In the case, Mridalini felt guilty of accepting the gift from the supplier because she felt she was doing something unethical. She also mentioned that she felt obliged to do a favor to that person because he might be expecting favors in lieu of the good and friendly ties. This way, she believed, it was a right-vs-wrong case.

But I seriously beg to differ from this opinion. I come from a business family and we work for various MNCs including TATA Steels etc. Every diwali, we send out dozens of gifts to the employees of these MNCs. We do this in good spirit. We simply respect the business ties we have with these employees and to further our good relations we send out gifts to them. It’s like we feel we are expected to send them our good wishes. And they might feel excluded if we don’t. We never do this in expectation of any future favours from these people. This is my first-hand experience due to which I feel that it’s not necessary that Mridalini’s case was that of right-vs-wrong because maybe it was all her assumption and the supplier wasn’t actually wanting any favours from her. Maybe he was just being genuinely nice to everyone with whom he had business relations.

Another important thing which I feel has stayed me from this course is the “Four spheres of executive responsibility”. I feel that each one of us has been through such tough times when we were unable to decide which side to choose, especially when both the sides seemed right. I, personally, take a lot of time when it comes to decide which side I want to choose. This happens because I weigh all the aspects way too carefully in order to ensure that I am not unjust in my decision. But I feel that now if I sort all these unstructured thoughts according to the four spheres framework and then look for the trade-offs by prioritising what I want to, I can not only reach decisions faster but also be more satisfied with them. I have been reading more and more about this, and I came across a very interesting research paper which is, in a way, an extension of the ‘four sphere’ concept.

The name of the study is “The consequences of Managerial Indiscretions : Sex,Lies and firm value” by Clien, Walkling and Yore.[footnoteRef:0] I would like to explain my viewpoint on this study and then link it to the “Four Spheres”. This study links the ethical lapses CEOs make in their personal lives to the stock prices and thus, the shareholder value. For instance, if a company’s board chooses to appoint a CEO publicly known to have extra-marital affairs, this is linked to financial costs the company might face in terms of falling stock prices. The study suggests that when a leader is known to have been lacking morals in his personal life, the public loses trust in him and his judgment. Not just this, a proof can be easily seen by looking at how the CEO and founder of Papa Jones, John Schnatter[footnoteRef:1], had to quit over his habit of saying things without filtering. He was alleged to have used the ‘N-word’ for a black person and was charged with racial discrimination. He ultimately had to step down as the CEO of the company he had founded himself.

In 2007, the WSJ reported that Chris Albrecht, the head of Time Warner’s HBO unit, assaulted his girlfriend outside a Las Vegas casino following the Oscar De La Hoya v. Floyd Mayweather Jr. boxing match. How do you think this affected the company?

The study suggests that there is a spillover from a manager’s personal indiscretions to the company value and the job performance. This is termed as the ‘integrated affairs hypothesis’. One of the most important reasons of this is that personal guarantees from a manager often form an important part of profitable business relationships. When the manager is seen to be lacking integrity, people become wary of the manager’s ‘personal values’ on a whole.

From here onwards, I could link it to the ‘Four spheres’ framework taught to us in the EIB sessions. ‘Personal Values’ is an important sphere and, more often than not, affects decisions to a large extent. I feel that in case of a dilemma, a person not only has to choose among these four spheres, but it seems that he first has to choose if he wants to keep his values above the benefit of the firm. A person in power can either use or misuse it. Therefore, it is very important for a leader to practice moral values even in his personal life. He is always under the radar and even step in the wrong direction can make him fall in a moment, irrespective of his past excellent performance records.

I would like to end with a quote that I really liked: “The quality of the ethical leader, then, arises not from having achieved ethical status, but rather from an unending realisation that ethics can never be fully achieved yet must always be pursued.”

Importance of Ethic in Business. (2021, Oct 08). Retrieved from https://studymoose.com/importance-of-ethic-in-business-essay 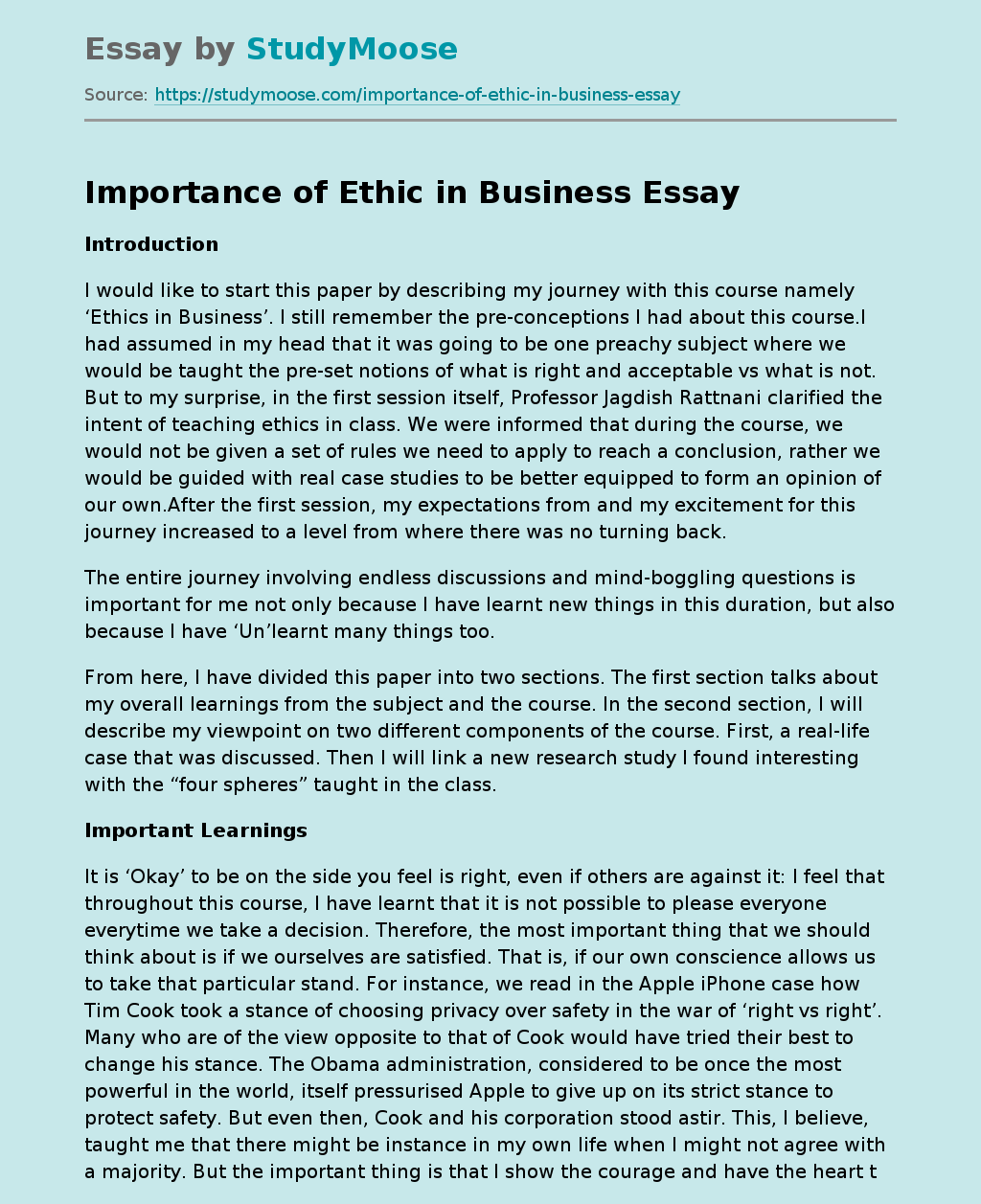