Equal in the workplace for men and women

First of all, I find it imperative to emphasize the characteristics that make women and men so different. It’s more than obvious that by nature’s default, women and men were given different features. In fact, people are having their own particularities that make each individual unique. Only known facts so far, but what I need to say is that these natural differences can’t be allowed to be the reason of social discrimination. And if the education system has become more and more efficient, providing women the opportunity to learn and specialize in many fields, statistics still say that the number of excellent specialists is smaller for women than for men.

Don't use plagiarized sources.
Get Your Custom Essay on Equal in the workplace for men and women Just from $13,9/Page

But we must ask ourselves why this is happening. Could women be less native gifted? Or could it be the social pressure that doesn’t allow them to express themselves? Or may the statistics research have been made by the men who do not wish to lose their supremacy? It’s difficult to answer.

And even if women have better scores when it comes to school, men are always ranked better and have a higher prestige. For example, a male engineer is often more appreciated than a female engineer.

Next, work is still discriminating for the two sexes, even if the discrimination is not an official one. These inequalities are also present in the private life, as women are the victims of a pervert social progress. For example, even if women are more independent in their couple life, there will be more single and divorced women due to that. One of them could be the fact that working women don’t have time for a successful private life. Another reason could be the fact that some men feel intimidated by some women’s qualities and can’t stand being inferior to them. At the same time there is a fragile compatibility between motherhood and career and the family policies that exist encourage women to give up working for a domestic way of living. This way, women find themselves forced to give up their independence.

But even a family life without having children means compromise to women. It’s natural for the women who have a full-time job not to have the strength to do all that housewives do. The woman’s duties at home are more numerous than the men’s, but at the same time, the equality between women and men force them to work the same time and way at their jobs. This situation is due to the fact that there are still a lot of men who think in the terms of the patriarchate system.

There are also men who treat women socially right, but this situation isn’t quite the happiest, as they somehow forget their manners or act thinking something like: ” If we’re equal and we do our own laundry, why should I hold her coat or open the door for her?!” This is also an abnormal situation. While in the first case the problem was that women were equal to men only when it came to work, in the second one the issue is about the equality that takes away women’s right of being respected as women. Women have entered the workforce and have risen in the ranks, but they still haven’t become male clones. Indeed, men and women can be just as different in the professional world as they are in their personal lives. What executives are just beginning to understand is that these differences can be great for business. Women and men are not equal in the workplace.

The differences between constitutions

In general, men are more interested in objects and things rather than people and feelings. They like doing things by themselves is a symbol of efficiency, power and competence. A women value love, communication, beauty and relationships. A woman’s sense of self is defined through their feelings and the quality of their relationships. They spend much time supporting, nurturing and helping each other. They experience fulfillment through sharing and relating.

I will tended to promote more men than women. I would even generally given men higher salaries. Why? Am I sexist? Do men do a better job? The answer is a resounding no to both. Actually, it is mostly women’s fault. They are too shy and simply don’t ask for raises or promotions as often as men do. Most bosses won’t fire you for saying you’d like to move ahead. Very often bosses don’t even think about who should be advanced and who shouldn’t. They’re busy juggling too many things. You have to sell them on the idea of promoting you.

Sexual harassment is a clear form of gender discrimination based on sex, a manifestation of unequal power relations between men and women. An employer forcing an employee to perform sexual favors in exchange for some reward or to avoid negative consequences. Women should not use overt sexuality to get ahead. Occasional mild flirting may have its place, but to be taken seriously, focus on business. Look professional and attractive but not sexy. The same goes for men. Guys who dress too flashily likewise aren’t taken seriously, except in the entertainment world.

Women and men are equal in the workplace

In the modern world, female and male have equal opportunity for education. Therefore, the knowledge of women will not less than men even more than men. So now in the society, there have a lot of women university graduates. In the past, most of the engineers, doctors, lawyers and businessmen are men while tailors, nurses and teachers are women. The principle are does not to be change. But now they have equal opportunity for education and knowledge so the careers of engineers, doctors, lawyers and businessmen are no longer for mens’ world and women can be also as good in these occupations than men even better than men. Hence, women have an ability to complete with men in the workplace.

More of the employer prefer to hire women in the work, especially in calculation field because women have more careful, calm and conscientious. Most of the men are more impatient, they do not pay attention to details. As long as there is something get wrong they will feel very irritable. So man’s patience will be less than women. When you cannot deal the things calmly, the thing will getting more complicated. Therefore, woman’s carefulness, calmness and conscientious will better than man.

Women must have strong mental to handle their work. That is because, in the work place they need to challenge with men. They need to become a super woman to secure their ability, position and a lot of pressure from the workplace. When they go back home, they need to change their mental to become a loving mother and gentle wife. In addition to, they need to do a lot of housework and take care about their family. And they do not put any pressure to home from the workplace and do not vent pressure to their family. So women need have strong mental than men to handle it. That is why, women can equal with men in the workplace.

Nowadays, many women have an ability to earn money and be independent in the competitive society. Women have rely on their own ability, interpersonal relationships, knowledge and effort to be a successful entrepreneurs in their own business.

Equal in the workplace for men and women. (2016, Mar 10). Retrieved from https://studymoose.com/equal-in-the-workplace-with-men-and-women-essay 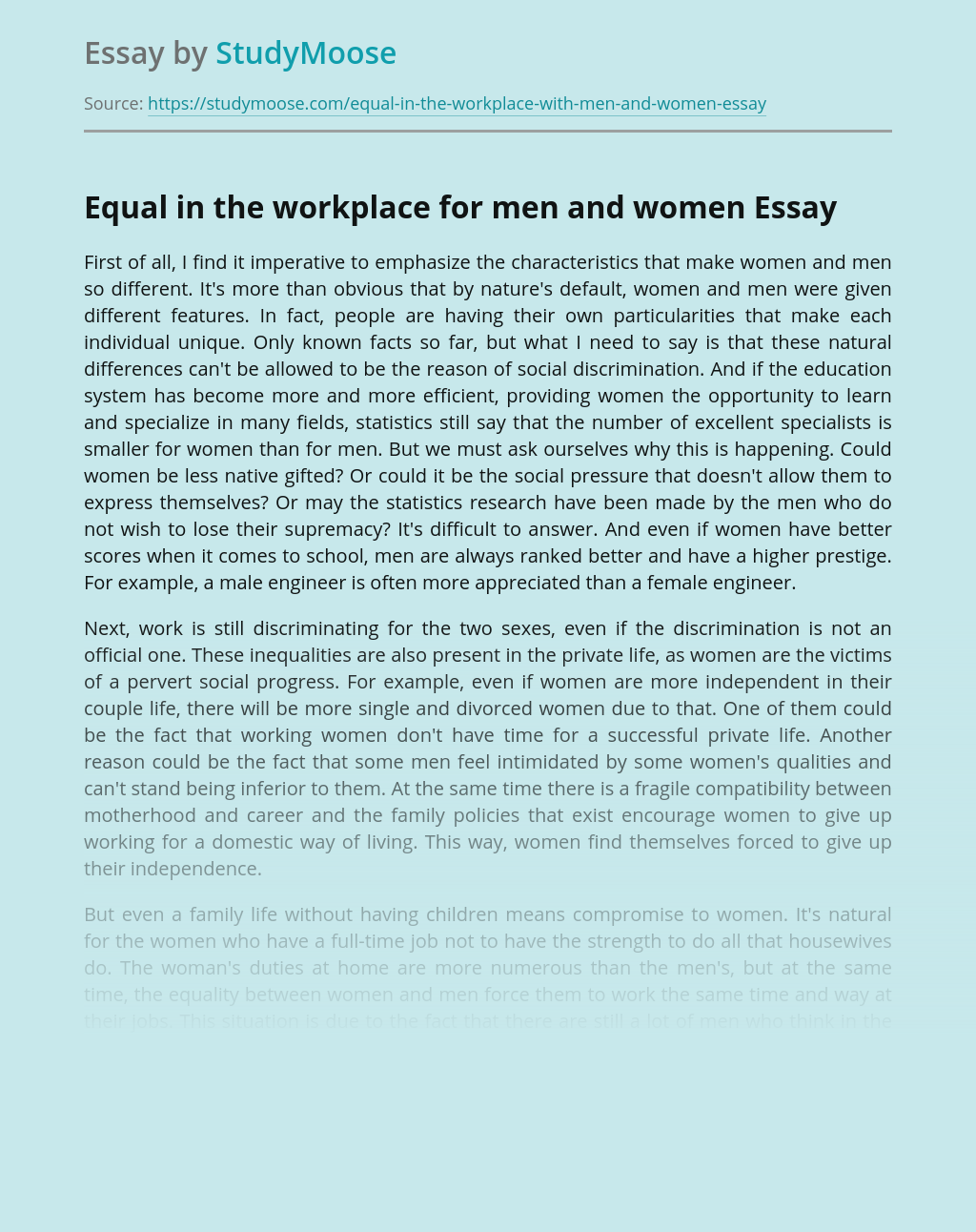 In the early 1930’s, war was forming in Europe. Totalitarian dictators were strongly influencing their countries, and those around them. The most prominent dictators consisted of Benito Mussolini of Italy, Josef Stalin of Russia, and Adolf Hitler of Germany. The United States didn’t want to get sucked into another war that wasn’t their problem, so...

View sample
Explain how the application of relevant principles and values

Within this unit, I am required to write an essay regarding relevant principles, values and provide holistic support for two service users. The first service user that I am going to do this for is a lady that lives in a residential care home, she has arthritis and dementia and no family to care for...

Introduction There have been several anti-gay bills introduced in several states across the country in which some states are against and some are for the bill. We would like to discuss the issues that the lesbian, gay, bisexual and transgender (LGBT) individuals have faced across the nation by presenting the facts from reliable sources. The...

?Early years providers regardless of type, size or funding must comply with the legal requirements set out within the Early Years Foundation Stage ( EYFS) so as to meet the needs of all children within the setting (DCSF 2008a, p11). The objective of this report is to critically evaluate the Special Educational Needs Policy used...