Women And Men Are Different, But Equal

The achievement of full equality between women and men is one of the most important essentiality for global prosperity and the advancement of society. The denial of such equality perpetrates an injustice against one half of the world’s population and stimulates male dominance that is carried from the family to the workplace. Being in 21st century after so many years of male dominance we are almost standing in the threshold of a feminine era, but there are still some signs of gender discrimination.

Turn in your highest-quality paper
Get a qualified writer to help you with
“ Women And Men Are Different, But Equal ”
Get high-quality paper
NEW! AI matching with writers

We are all humans with inborn endowments and we all should be treated the same. Women and Men must be equal in their rights and opportunities and one gender should not be considered ‘Superior’ over the other. Men and Women are naturally different in physical aspects. When God created man, He made him in the likeness of God. He created them male and female with blessings of equality and called them “Man” (not man or woman). It’s true that they are mentally and emotionally different in certain aspects but these differences are more socially constructed since childhood by pressure of society and parents not by God.

If men have power to rape and injure women, in contrast women too have endurance and strength to bring forth men and put an end to the violation.

MEN and Women represents two forms of divine energy, they are the male and female elements of a psyche. A human being is neither masculine nor feminine, but has two forms of emanation~ the masculine form which is by nature more aggressive, externally oriented and physically more powerful, and the feminine form which is more subtle, emotionally powerful and embodies inner dignity.

Some people confuse such subtlety with weakness; in truth, it is stronger than the most aggressive physical force. True human trait does not shout; it is a strong steady voice that speaks from within. The nature of a woman is not weak and nature of a man, while aggressive, is not brutish. Man and Woman are two sides of a coin and to be complete, they must possess both energies.

In order to understand the essential nature of man and woman, we must do away with mortal subjectivity and look through God’s eyes. Every human being, man or woman, was created for the same purpose—to amalgamate body and soul in order to make themselves and their world a better and holier place. In the service of God, there is absolutely no difference between a man and a woman.

Bible declares the truth, so In Christ Jesus all children of God through faith, for all of you who were baptized into Christ have clothed yourselves with Christ. There is neither Jew nor Gentile, neither slave nor freeze, neither male nor female, for you are all one in Christ Jesus. According to divine revelation of Christianity, God created the woman as a “helper” for the man. The Lord God said, “It is not good for the man to be alone. I will make a helper suitable for him (genesis 2:18).

However, being a “helper” does not imply that the woman is acquiescent or inferior to the man. In fact, God created both man and woman in His own image and made them equal custodians of all his creation. If woman worship’s her husband like a God, it does not mean she is weak and her husband can rule over her. She sees in him a Godlike husband and expects love and respect in return and wants him to use his strength to protect and preserve the feminine character, helping women realize there true potential in revealing Godliness which the world so desperately needs today. If the man does not fulfill his role, then it is the woman who must respectfully bring it to his attention. If she has tolerance and devotion to worship her husband, she also has power and strength to rule and slay demons around her like Durga.

Not only Christianity but Hinduism too teaches that man and woman are of equal worth, but have different roles and responsibility because they have different dharma to follow. The Ramayana (Hindu text) tells the story of Lord Rama and his wife, Sita, who proved her “pativrata” (chastity) by giving “agnipariksha” and showed the world that she was not weak, but her love and devotion for her husband was more important to her than her pride. And for this woman still follows her as an example and inspiration.

As the man and woman subject is endless, i’d like to end it with a question for the mortal psyche that when the omnipotent Lord didn’t provide lesser blood and mass to either of the sexes of clay model human is, who are we,
the receiver of this gift of life to look a gift horse in the mouth and interrogate his manifestation?

Women And Men Are Different, But Equal. (2016, Mar 19). Retrieved from http://studymoose.com/women-and-men-are-different-but-equal-essay 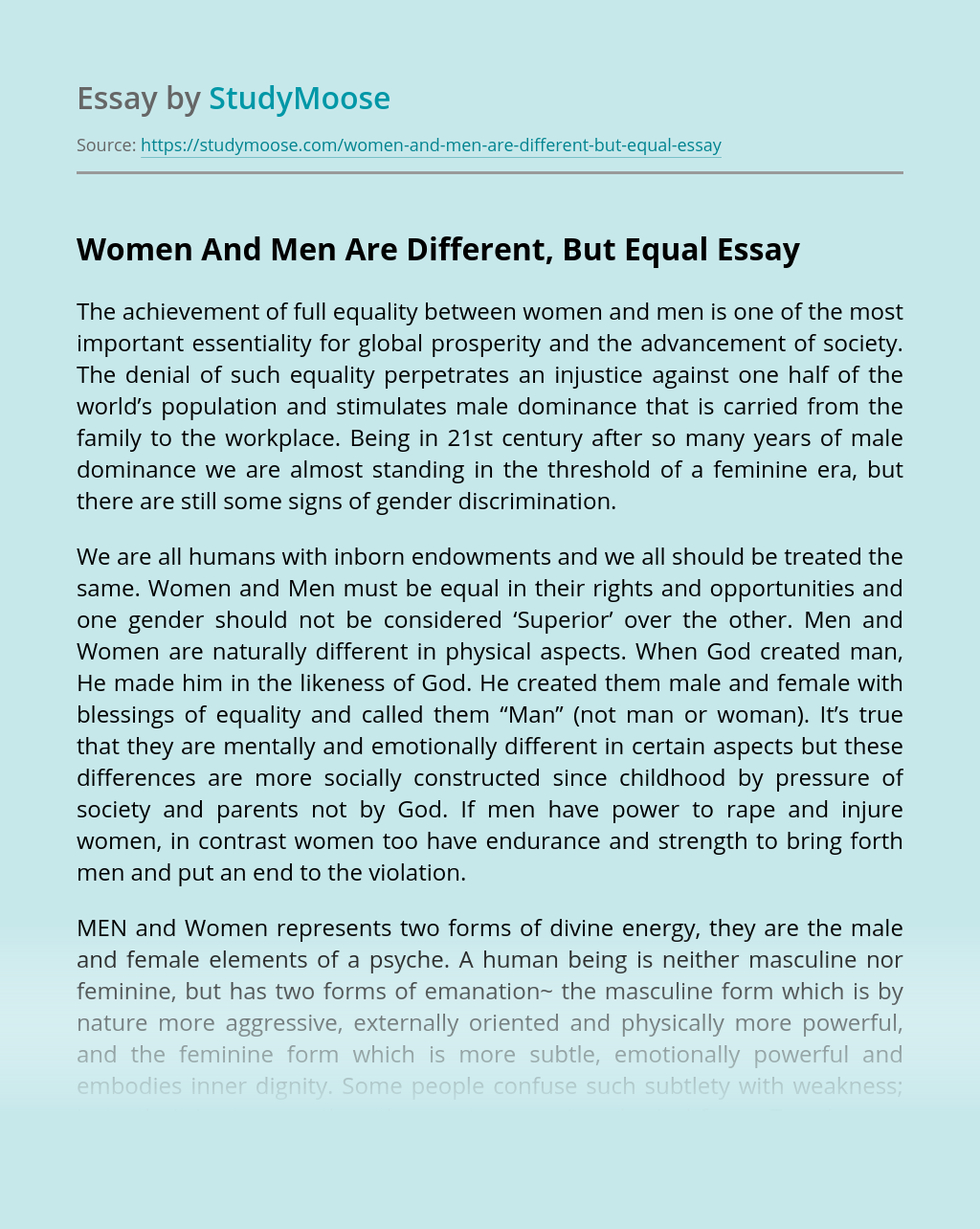 Turn in your highest-quality paper
Get a qualified writer to help you with
“ Women And Men Are Different, But Equal ”
Get high-quality paper
Helping students since 2015
Stay Safe, Stay Original