In the Epic The Odyssey by Homer, Homer emphasizes the sacrifices made by the brave heroic Odysseus as he faces many harsh obstacles fighting in the Trojan War for the past 10 years. This Epic portrays many emotional and mental values as it is depicted by many brave heroes who were willing to make very difficult decisions. The value of relationships and hospitality is revealed throughout the novel.

The author acknowledges the value of culture of the characters as there is a constant repetition of hospitality.

Don't use plagiarized sources. Get your custom essay on
“ Epic Poems The Odyssey ”
Get custom paper
NEW! smart matching with writer

Throughout Odysseus’s journey, multiple characters come along his path as they each hold their own moral. Many of these characters represent the constant repetition of hospitality shown as they are pleasing the Gods by sharing and providing items for people in need, knowing that some type of incentive will be given back to them in return for completing a good deed. In this novel, hospitality is an important part of honor and negotiation of relationships.

Odysseus acknowledges the fact that “Aeolus hosted [him] one entire month…he gave [him] a sack, the skin of a full-grown ox, binding inside the winds that howl from every quarter” (Homer 231). His acknowledgement reveals the hospitality between the characters since it is told that Aeolus was kind enough to host Odysseus and his men for an entire month and provide him with a sack of wind, which will come to be useful later on. Many other good deeds are done by the characters throughout the novel in order to show the constant repetition of hospitality. When Odysseus is at King Alcinous’ palace, “[he] hid his face while he wept. His weeping went unmarked by all the others; only Alcinous, sitting close behind him, noticed his guest’s tears, heard the groan in the man’s labored breathing and said at once to the master’s mariners around him…our loyal friends at banquets. Now we go out again and test ourselves in contests…so our guests can tell his friends…how far we excel the world.” (Homer 192). A good deed can be shown in this passage as it is shown that King Alcinous is taking good care of his guest, Odysseus, as he is trying his best to recover Odysseus from crying by attempting to hold a fun contest. King Alcinous refers to Odysseus as “our loyal friend” (Homer 192), showing how he treats him with respect and truly cares about his well-being.

Imagery is crucial in the Odyssey as it reveals clarification for the relationships that the characters have with each other. Homer intelligently uses imagery to paint dramatic pictures of the relationships between the characters. It is revealed that Odysseus’s men does not have any trust in him as “the crews began to mutter among themselves, sure I was hauling troves of gold of silver home, the gifts of open Aeolus…Now this Aeolus loads him down with treasure. Favoritism, friend to friend! ‘Hurry let’s see what loot is in that sack…”(Homer 231). When his men opened his bag of wind it blew them so off course that they were so close that they could see Ithaca, but it was because the relationship between Odysseus and his men that threw him off course; the men does not have any trust in Odysseus. They would not have opened the bag of wind in the first place if they had trust in Odysseus, but they did not as they thought that Odysseus was going to keep all the gold and silver to himself. The use of imagery also represents the strong father-son bond that Odysseus and Telemachus have with each other. Unlike other father-son relationships, it is the great amount of distance between Odysseus and Telemachus that formed the strong bond between them. Telemachus must earn his father’s respect by fighting his own battles. Through the distance between them, they are able to establish their share of beliefs and values.. When the father and son finally meet, “salt tears rose from the wells of longing in both men…/So helpless they cried pouring out tears,/ and might have gone weeping till sundown” (Homer 268). Homer’s use of imagery strongly illustrates the emotional reaction when Odysseus and Telemachus is finally reunited. The son and father was able to share their beliefs and values through the distance that held them apart, making their bond even more close.

In The Odyssey, Homer highlights the importance of hospitality between the characters in order to form a loyal relationship. This Epic is portrayed by fearless heroes who were able to sacrifice in order to receive. Having the ability to fight for your own battles truly shows your worth and loyalty to others as it shows how much you are willing to put yourself through. 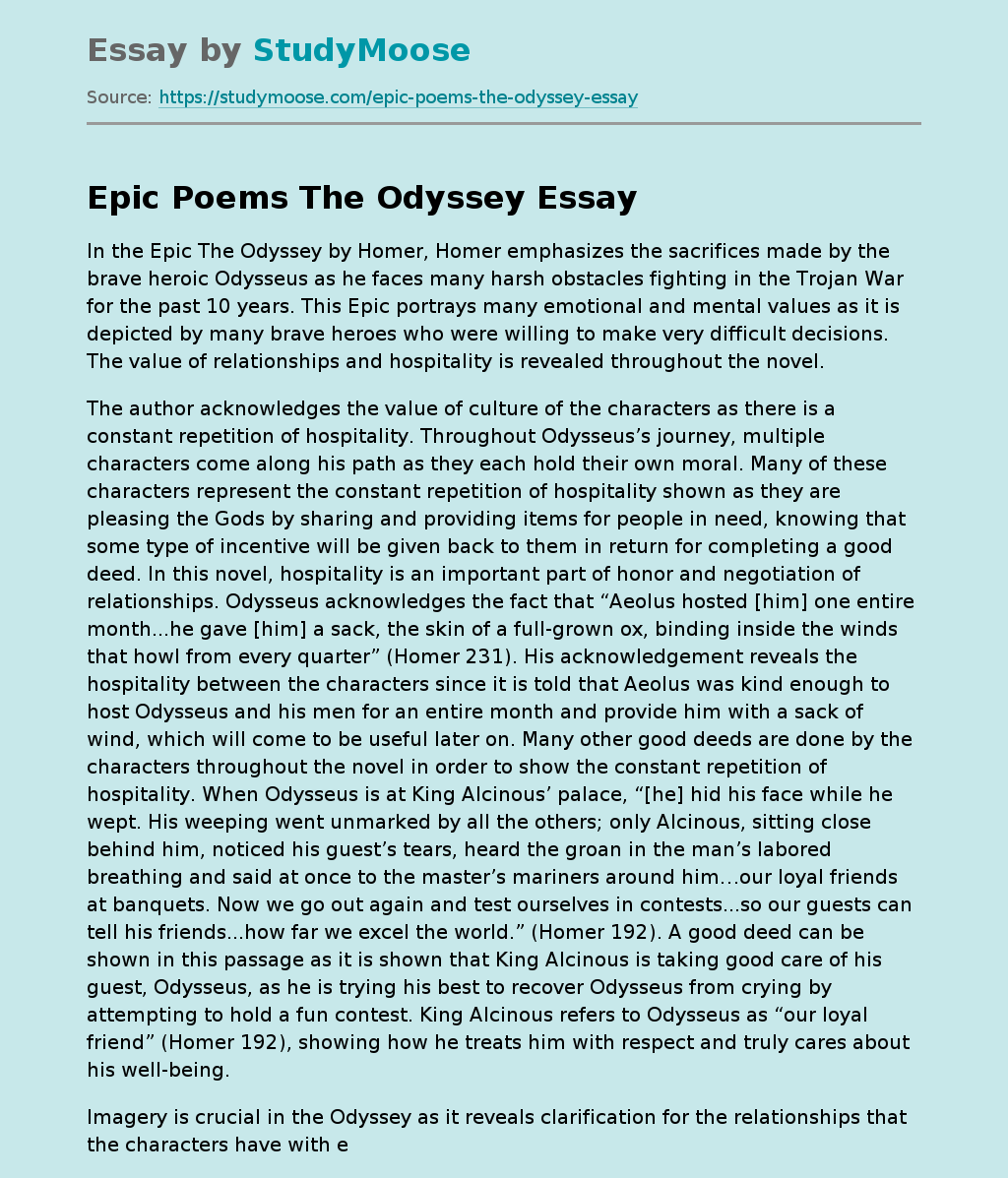