Objective: Copy and paste the questions and your answers, or attach your document. Remember to include your speech defending King George or supporting Patrick Henry, following the instructions in the lesson. 1. According to Patrick Henry, what is the basic question being debated at the Virginia Convention? Henry states that the debate was “nothing less than a question of freedom or slavery.” He then defined the level of the situation and says that slavery is a “retreat”. 2. What reasons does Henry offer to suggest that the British were not worthy of trust at that time? Henry’s main reason was that it was the British were collecting and gathering military services that are an essential for America.

Don't use plagiarized sources. Get your custom essay on
“ English Speech Quiz ”
Get custom paper
NEW! smart matching with writer

3. What argument does Henry provide against the notion that the colonies are too weak to fight the British? He provides the argument that God has provided them with the required power to battle their enemy/rivals. If they sit around and continue to do nothing, they cannot win the battle.

4. What is Henry implying when he says that he is loyal to “the majesty of heaven…above all earthly kings”? What tone (manner in which an author expresses his attitude) does this statement hold? He is clarifying that he is loyal to God above anyone else. I believe the tone is a humble yet respectful one, though some may think otherwise. 5. Why are Henry’s final words so effective and memorable?

His final words, “Give me liberty or give me death,” were so effective and memorable, because not only have they been used numerous times over the years, also they have become a representation and guide for our country.

For him to say that to die for slavery as an alternative to having freedom is a very powerful and daring message that he finalized in his speech.

6. A rhetorical question is a question posed to emphasize a point, not for the purpose of getting an answer. Henry uses this device extensively throughout his speech. Find one example in the speech, quote it and explain what point he is emphasizing with those particular questions. “Shall we acquire the means of effectual resistance by lying supinely on our backs and hugging the delusive phantom of hope, until our enemies shall have bound us hand and foot?” In this rhetorical question, he is attempting to get the perspective that it is essential to do something. Otherwise, they cannot just believe and live on the hope that the British will overcome them; they must fight back eventually.

7. Parallel structuring is the repeating of phrases or sentences which are similar (parallel) in meaning and structure; repetition is the repeating of the same word or phrases to create a sense of rhythm and emphasis. Find an example of parallel structuring and repetition in the speech. Explain why this device is effectively placed in the speech. “I know of no way of judging of the future but by the past. And judging by the past, I wish to know what there has been in the conduct of the British ministry for the last ten years to justify those hopes with which gentlemen have been pleased to solace themselves and the House.” The expression “judging by the past” gives Henry a sort of “justification” to what he is indicating. It is effectively placed in the speech because it further underlines his information of the circumstance.

8. Allusion is a reference in a speech to a familiar person, place, thing or event. Henry uses two allusions in his speech (they are highlighted in blue).What is the source of each of these allusions? -The first allusion is to mythology. “Sirens” were women in Ancient Greek mythology who were seductive and dangerously deceptive. Henry uses this to say that Americans should not be listening to the voices of the sirens, rather doing what they know is right. -This allusion is to the Bible (in the book of Luke, I believe). Jesus was with Judas and was explaining that a real friend would not kiss you and then turn around and betray you

9. Syntax is the study of sentence structure. Observe the length of the sentences in the first and last paragraphs of the speech. What differences do you find? How do these differences affect the tone of the speech? I find that as the speech gets closer to the end, the sentences get longer. This is highly effective, because shorter sentences cause a sense of urgency and forcefulness in his speech. 10. Diction is an author’s word choice, in this case the orator’s choice of words. In the third paragraph, Henry uses a string of verbs (highlighted in orange): petitioned, remonstrated, supplicated, implored. They are arranged in a climactic order, flowing from the mildest to the strongest. Find four synonyms for these verbs, and rewrite that sentence using your choices. Are they as effective as Henry’s choices? Why or why not? Petitioned: Appealed

Option B: “Someone must support Patrick Henry so that his impassioned speech does not go to waste! You agree with what he has said and want to show your support. You take the floor with a dignified stance, clear your throat and say . . .” Unites States of America. Home of the free. Land of the brave. This is our country. Our lives depend on the philosophies on which we act upon, which requires much responsibility for us to defend. So, what then defines bravery? Bravery is not contained of inactive potential. Bravery is not courage, yearning, or determined reflections. It does not, nor should it not yield to the British. It is evident that they have amassed an army against us. They very well can perhaps overcome us and inhabit our homes if you like.

This would be such a slap in the face, would it not? To sit back in an indolent state of obedience, retreating in fear. Do you want to be a nation overcome by the sensation of emptiness or failure? To answer that question, merely walk outside. Gaze at our flag that flows in the wind with pride and triumph. Henry’s speech was a call to action. If we do not have liberty, what are we? Without liberty and power, the American frame will develop into a fragment of the world’s recollection, disappearing in the shingles of time. You exist in in the home of the brave; Let us reinforce ourselves against malevolent and express integrity. 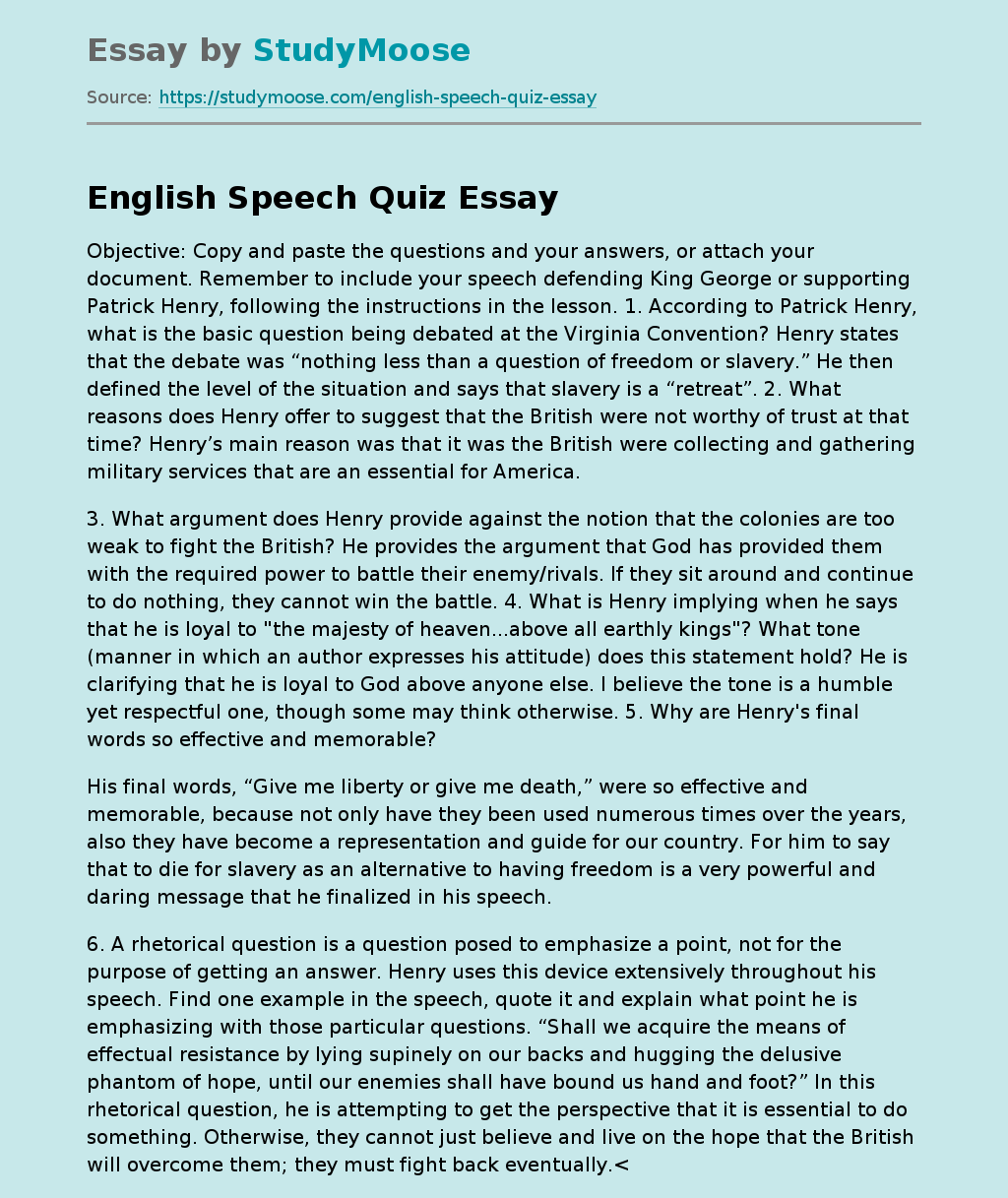