English as a World Language

The global spread of English over the last 50 years is remarkable. It is unprecedented in several ways: by the increasing number of users of the language, by its depth of permeation [“pE:mI’eISn] into societies and its range of functions.

There is a model consisting of 3 circles proposed by B.B. Kachru in 1982 in order to describe regional varieties of English. The 1st or inner circle includes people who speak English as their vernacular language (200-400 mln speakers).

Don't use plagiarized sources.
Get Your Custom Essay on English as a World Language Just from $13,9/Page

The outer circle includes people who live territories colonized by Britain and USA (India, Nigeria). And the expanding circle includes the rest of the world which is learning English.

There are several basic characteristics of the English language which make it so popular.

1) The simplicity of form. It has no many inflections to show singular and plural, tense, person like in German, Russian and French. Verbs have very few inflections and adjectives do not change according to the noun. 2) Flexibility. As a result of loss of inflections English has become a very flexible language. Without inflections the same word can operate as many different parts of speech. Many nouns and verbs coincide in form. Adjectives can be used as verbs. 3) Openness of vocabulary. This involve the free admissions of words from other languages and easy creation of compounds and derivatives. Most world languages have contributed some words to English.

Though English is a world language there are some ideas of creating a lingua franca which will be the vehicle for international communication. Such a lingua franca can become Esperanto. Created in 1887 by Ludvig Zamenhof as a
means of unifying the whole world it’s spoken by 8 mln people all over the world. It’s taught at schools in China, Hungary and Yugoslavia. There are some advantages of Esperanto as a 2nd language. -It’s easier to learn (Esperanto has 16 rules and no exeptions). -It’s a neutral language. It has no political or cultural bias. -It saves money because 55% of expenses in all international organizations are spent on interpreters and translators. But nevertheless English which began 1500 years ago as a rude language now encompasses the world. There is no reason to believe that any other language will appear within the next 50 years to replace English. However it is possible that English will not keep its monopoly in the 21st century. A small number of languages may form an oligopoly – each with special area of influence (Spanish for example).

English has been an international language for only 50 years. Geographically it’s the most widespread language on Earth, second only to Mandarin Chinese in the number of people who speak it. It’s the language of business, technology, sport and aviation. This will no doubt continue although the proposition that all other languages will die out is absurd.

English as a World Language. (2016, Mar 23). Retrieved from https://studymoose.com/english-as-a-world-language-essay 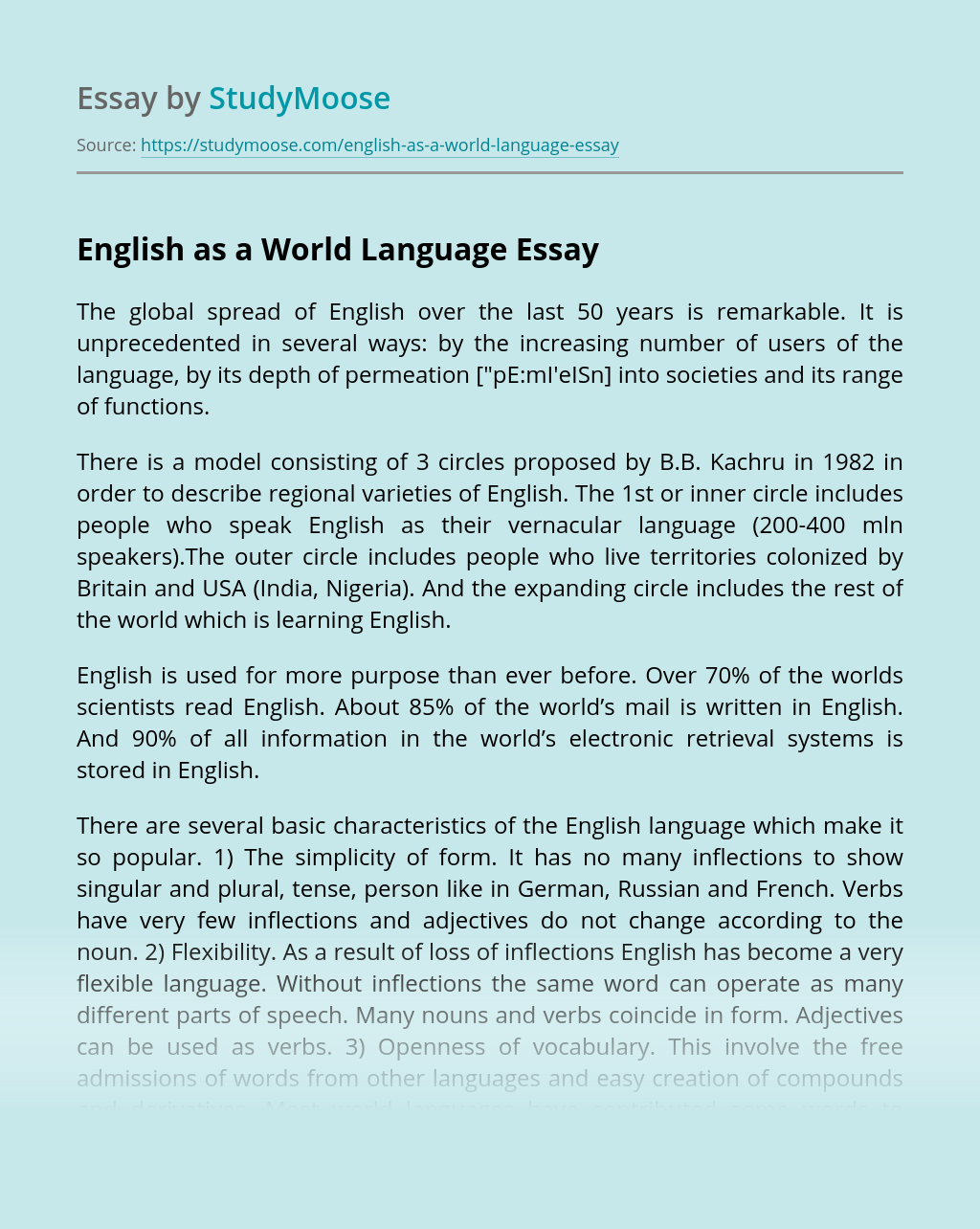 English as a Global language

Rate this post Discuss the positive and negative impacts of having English as global language Over the last decades English has played an important role around the world as common language for economic, education, scientific and entertainment exchange between nations and in particular between people. The positive aspect is that English language open doors in...

English as the Most Widespread language

Rate this post Crystal begin “ English as a Global Language” by asking what means for a language to be global ,and what the advantages and disadvantages of having a global language. There is no official definition of “global” or “world” language, but it essentially refers to a language that is learned and spoken internationally,...

Rate this post Language is a social-cultural-geographical phenomenon. There is a deep relationship between language, culture and society. When we study a language, we have to study its dialects, register, slang, taboo, idiolects, etc. We can find the role of language and culture in The Parent Trap movie. The movie tells us about the differences...

The future status of english as the global language is assured

Rate this post English has become the common language used in most parts of the world, even in the western coutries use English as the first language and some other countries still regard English as a foreign language, it still can not be denied that English is the global language today. But how about its...

Rate this post Abstract Is English Killing other languages? As we went on to know and find out what people think about question, we learned and observed people’s different opinion, rather we should term it as conflicting. Some say we cannot blame the English to be a language killer, world is changing and those who...

Rate this post English is an international language spoken all over the world that was originally borrowed from the world. If English is used as a global language, there might be some advantages related to communication and business. However, there are also several disadvantages in terms of losing mother tongue and taking time and money....

Rate this post As we can see, this is not the situation in Jamaican Creole. Case is always demonstrated by position. Any pronoun before the verb is the subject, and after the verb it is either the direct or indirect object. Other features to note are the lack of gender and absence of nominative and...