If “Grit”, as defined as a measure of perseverance and the way to achieve a long term goal to succeed in college, then who needs family support and resources? Angela Duckworth’s theory of ‘Grit’ is based on an area of psychology research that determines how to be successful in college. Duckworth’s theory argues that having ‘Grit’ or perseverance is the main force that will pull students through to complete college.

While I believe Duckworth’s theory to be useful and that having “Grit” can be key to one’s success in college completion, I do believe that it is the backbone to many other traits and outside influences important to succeed in college.

Don't use plagiarized sources.
Get Your Custom Essay on English 101 Grit Just from $13,9/Page

In the case of Donna Beegle’s Story, I think that Duckworth’s theory would be only somewhat useful to understand her success. In the article, “An Insider’s Perspective: The Donna Beegle Story,” Beegle tells her experience of overcoming extreme poverty and beating all odds and achieving a doctorate.

During her road to success, Beegle had many outside influences that were the key to those achievements. She reached out to a Community Action Agency that really opened the doors for her and started a rippling effect towards key resources and influential people. First and foremost, the biggest stepping stone for her was when the agency connected her to the WIT (Women in Transition) program. Beegle states, “With an enormous amount of support from the WIT program staff and my family, I entered the community college to work on a two-year degree. (246)

In addition to the WIT program, Beegle states, “The one thing that kept me from giving up was the “Section 8” public housing certificate from the Portland Housing Authority given to me by the WIT program. ” (246) Beegle’s statement proves one of my points, that if it was not for that resource, she would have not have been “gritty” enough to continue her education. For people like Beegle, a GED was just not in the realm of capabilities for her, without those resources, she would not have been able to persevere to that point and beyond with her education. Secondly, let’s consider her family.

Her family played a huge role to her success as well. Beegle’s parents watched her children while she attended college, and gave her the motivation and praise she needed to keep going. In addition Beegle’s brother Wayne provided an unusual and unexpected amount of support that led her to complete her two-year degree. Wayne was incarcerated for twelve years; during those years he had an endless amount of time to read and become something Beegle describes as “middle- class literate. ”(248) It was her brother, who through letters back and forth between the two, helped her understand her assignments.

Therefore, it’s her family’s support and help from her brother that allowed her to persevere. In addition to all of the resources and family support, Beegle was lucky to have crossed paths with a language specialist by the name of Dr. Bob Fulford. Fulford was the mentor in Beegle’s life that made a huge impact on her educational success. He went beyond his job as a professor of the university she attended, and really took the time to work with her and guide her through academic achievement and personal affairs. He also taught her how to write and corrected her speech.

On top of that support from him, he also “linked her to a network of professionals in the community who continues to widen my range of possibilities. ” (249) I believe Fulford’s guidance and encouragement were the key element to Beegle’s success. If it was not for him and other mentors like him believing in her and recognizing she was not “stupid”, she would not have the chance to better her education. For some people, Duckworth’s theory of ‘Grit’ and perseverance is just not enough to get a college student through to college completion.

According to Beegle, “[m]entors, [m]iddle-[c]lass [l]anguage” (247) and people seeing her for where she was “[w]ere [k]eys to [m]y [e]ducational [s]uccess”. For me personally, if I did not have my family, financial aid and the Women’s Program at Highline Community College, I really don’t think I would be able to manage. Even if I had ‘Grit’, there are road blocks like child care and having affordable housing that make it possible for me to stay in college. In my experience, ‘grit’ has helped tremendously when combined with the other elements in my life.

For example, I recently helped my mother move from her apartment she has been in for over 24 years, to her home she now owns. Between my brother and I and just a few friends, we spent weeks of packing, updating the new house and unpacking. It was ‘grit’ that helped me through doing this huge move while still making it to class every day, turning in all my homework, and acing two quizzes. I was determined to make school a priority over all the other important events that were going on around me.

However, some might argue how ‘grit’ played a major role in Beegle’s and my own story, especially when faced with a big disadvantage such as poverty and severe lack of proper education and in my case, a single parent. They may say that the only way to overcome those obstacles is to persevere through it. It’s true that wanting an education and a better life is what will make someone become “gritty”. It is my ‘Grit’ that has helped me in my classes; there have been assignments that have made my eyes go cross and makes me feel like I just want to give up.

But my inner grit comes out and I think of the long term and what I want for my daughter and I. It is those moments when I can say Duckworth’s theory is useful to my situation but not in the grand scheme of things. With grit alongside with these other elements, one can be successful. So in conclusion, I do think having ‘Grit’ plays a big part in one’s success to college completion or at least it is a great supporting factor.

Do I think “All I need is Grit and I can get a degree? ” No. What I think is, grit can help through the hard times, when you feel like giving up, persevere through those obstacle and find another way to get to where you want to go. It is that inner quality of grittiness that will assist someone on their journey. Like Beegle states, “With subsidized housing, food stamps, mentoring from numerous people, and the support and encouragement of family and agencies, I was able to move forward and become educated. ” (248) for me and others alike, ‘Grit’ is only one piece of the 500 piece puzzle. 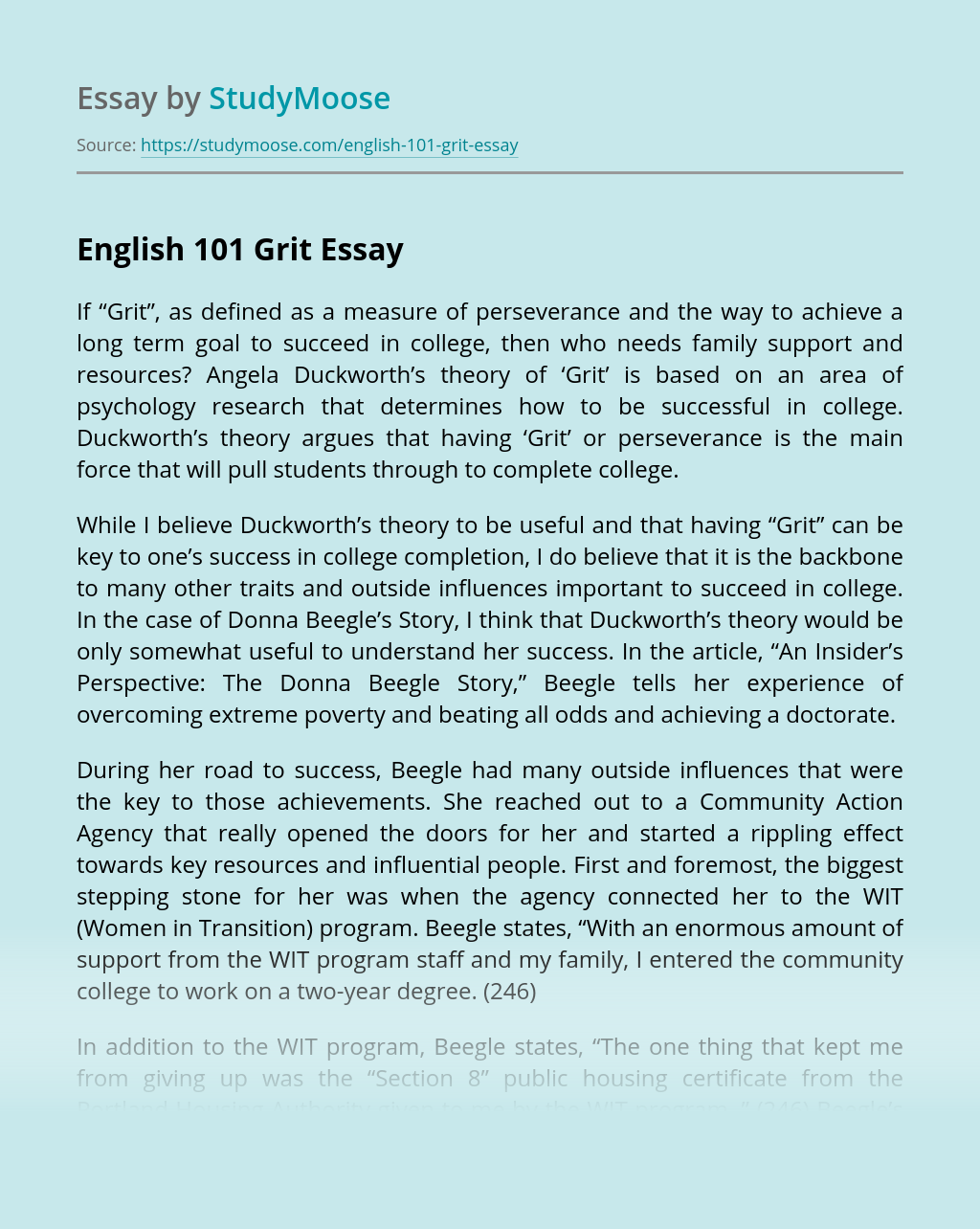 An Online Enrollment System was proposed for the enhancement of the current enrollment system of Bulacan Polytechnic College (BPC). The study aimed at creating a system that would provide another option for enrolling and that would compensate for the school’s lack of manpower and time-consuming system. The system contains stores information such as class schedules,...

Should Police Officers Have Higher Education

Ought to Police need to have higher education than the majority of people they deal with on a day to day basis?I state yes and here are some reasons. Authorities Education has been long because disputed in the United States. Law Enforcement should be the one who are correctly informed if they are the ones...

Entryway Assessment – An evaluation success in which qualifies an individual to join a school, university, company. Assessment that numerous academic institutions utilize to select trainees for admission. These exams might be administered at any level of education, from primary to college, although they are more common at higher levels. School – An organization for...

Good morning /afternoon ___________ my name is _________I stand here before you to discuss the reason why I want to be part of the leadership team and hopefully become school captain for this year. (20__}. I realize that it’s a privilege to have the honour but I am confident that I will be a suitable...

The theories, principles and models in education and training

Introduction This report will analyse some of the theories, principles and models in education and training. I will report on how these can be applied, and how they can enable inclusive learning, through exploring my own research. The report will also show how learners preferences should be taken into account as per of inclusive teaching...