Grit: The Power of Passion and Perseverance

Angela Lee Duckworth was born on 1970. She is an American academic, psychologist and popular science author. She is the Distinguished Professor of Psychology at the University of Pennsylvania, where she studies grit and self-control. Prior to her career in research, Angela founded a non-profit summer school for low-income children which won the Better Government Award. Angela studies non-IQ competencies, including self-control and grit, which predict success both academically and professionally.

Duckworth earned a B.A. in Neurobiology at Harvard College in 1992.

Don't use plagiarized sources. Get your custom essay on
“ Grit: The Power of Passion and Perseverance ”
Get custom paper
NEW! smart matching with writer

Her first book was: Grit: The Power of Passion and Perseverance. Duckworth is best known for her research on grit, a strength she defines as passion and perseverance for especially long-term goals. Grit is related to the long-established personality trait of conscientiousness but predicts certain outcomes above and beyond what conscientiousness can.

She has found grit to be a common factor in the high-achievers she has studied. When it comes to consequential life outcomes, grit has been shown to be at least as important as IQ.

Grit has been studied across the lifespan, but Duckworth focuses primarily on how building it can help adolescents. This falls under the umbrella of character education and the movement to expand school instruction beyond solely cognitive factors. However, meta-analyses have found no evidence that grit is linked to superior performance.

Moreover, Duckworth’s operationalization of grit has been criticized as a mere renaming of the previously established construct “conscientiousness”. Duckworth defines it, grit is passion and sustained persistence applied toward long-term achievement, with no particular concern for rewards or recognition along the way. It combines resilience, ambition, and self-control in the pursuit of goals that take months, years, or even decades.

Her studies of grit began when she was teaching math to seventh graders. She realized IQ wasn’t the only factor separating successful students from those who struggled, and that grit—holding steadfast to a goal through time—was highly predictive of success. She then spent years analyzing the short- and long-term effects of grit on people’s performance in school, at work, and in personal relationships, and published her research in Grit: The Power of Passion and Perseverance. Some claim that focusing on grit would lead to the neglect of other important factors, like the positive socio-economic prerequisites necessary to deploy it. Duckworth acknowledges the importance of environmental factors and says that it’s not that one matters more than the other but rather that they both matter: “The question is not whether we should concern ourselves with grit or structural barriers to achievement. In the most profound sense, both are important, and more than that, they are intertwined.

Contributions made by Angela Duckworth and Grit

Not only has it become a predictor of salesmen’s and women’s commitments to their job, but it has been a successful forecaster of student graduations and completions of degrees too.

Like her book, Grit: The Power of Passion and Perseverance, points out, talent is not always what keeps adults and children committed and excel in their life. “Aptitude did not guarantee achievement” as Angela points out. However, it is perseverance, and passion they have for content and experiences that interest them and the effort they put in to help them achieve.

Grit: The Power of Passion and Perseverance. (2020, Sep 23). Retrieved from http://studymoose.com/grit-the-power-of-passion-and-perseverance-essay 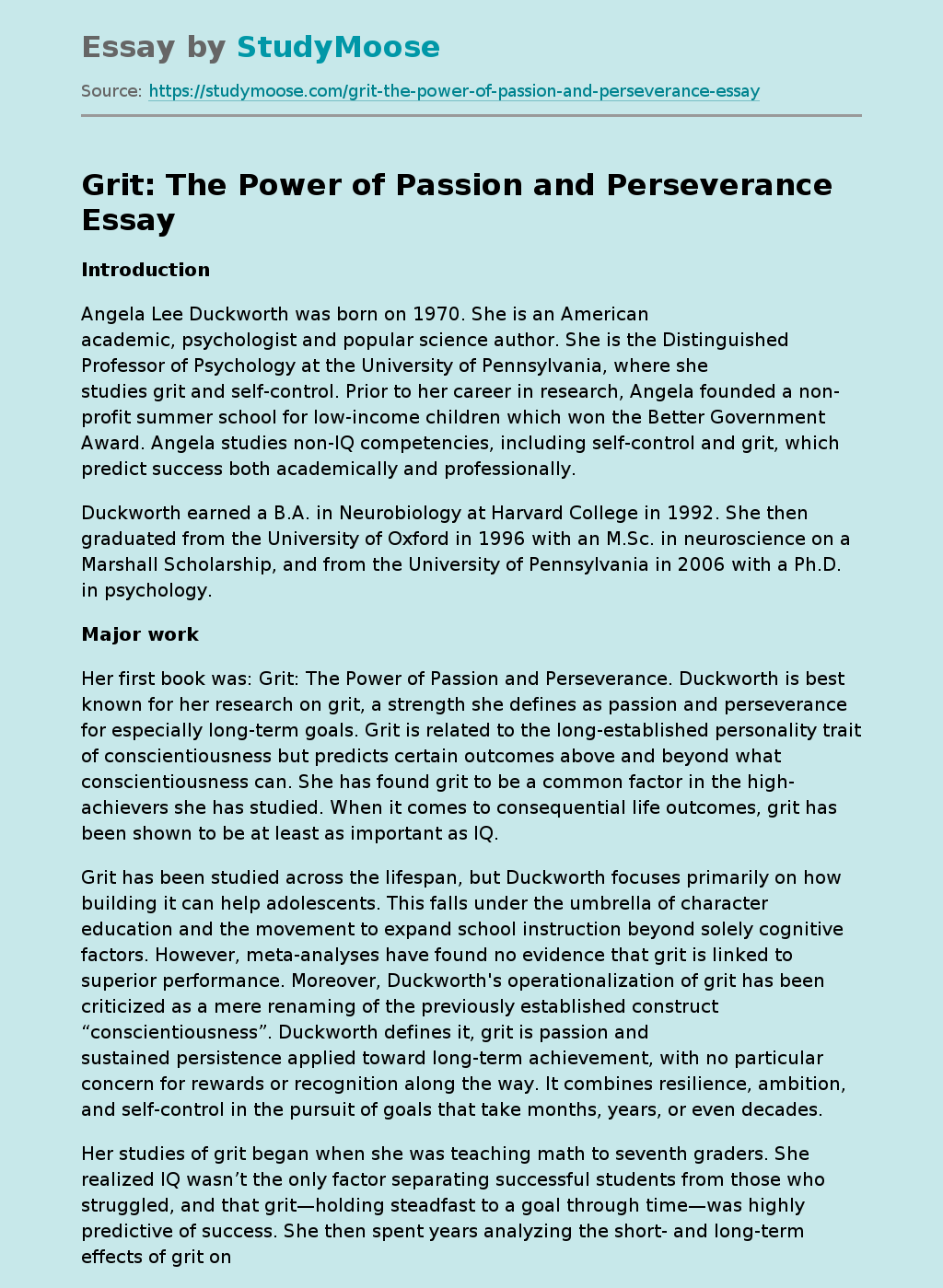