Some said they were too powerful, some said they were too different. Words like ‘inferior’, ‘outsiders’, and ‘scapegoat’ were their labels. Those not afraid of them would ask: Did you actually cause the Black Plague? What about the spread of AIDS in Europe? Did you kill Jesus Christ? Regardless of how peacefully they walked down the street, people would cross to the opposite side. Ever since the first recordings of Judaism in 1400 BCE, the Jewish people have been persecuted as a religion, and even as a race, but the largest case of this discrimination was certainly the Holocaust.

Don't use plagiarized sources. Get your custom essay on
“ Image Analysis on Maus by artist Art Spiegelman ”
Get custom paper
NEW! smart matching with writer

In the case of the Holocaust, or World War II, which took place in the 1930’s and 40’s, the Jewish people were being blamed for causing the first Great War, or World War I. During this time, it seemed like all fingers pointed to the Jews; they had no where to turn but to other Jews. The average person closed their door when a Jew knocked.

Not only hatred, but fear of association caused the public to turn their backs on this constantly bullied group of people. With the masses on standby, the President of Germany at the time, Adolf Hitler, led the Nazi Party to kill an estimated 6 million Jewish men, women, and children. “The sad and horrible conclusion is that no one cared that Jews were being murdered… This is the Jewish lesson of the Holocaust…” quotes former Prime Minister of Israel, Ariel Sharon. The only people who stood up for the Jews were their fellow Jews.

The Holocaust was undoubtedly the largest slaughter of Jewish people in history, but the question is, if they had no one to help them, how did any Jews get out alive? Well, as few as “195,000 survivors and family members” lived through the Holocaust, according to the United States Holocaust Memorial Museum (“Frequently Asked Questions.”).

Only a portion of these survivors were Jewish, and out of those Jews, very few shared their stories with the public. Vladek Spiegelman was one of those few. In the book series “Maus”, acclaimed comic artist and writer Art Spiegelman, puts his father’s words into black and white illustrations mixed with a heart wrenching story of the what the Holocaust was like. In the story, Art Spiegelman displays many topics through his pictures, one of the most powerful concepts portrayed is that the Jews needed help from each other to survive the Holocaust. This concept is clearly portrayed through a series of images depicting the desperation, resistance, and perseverance experienced by the Jews in the Holocaust. When the Jews needed help from each other in “Maus”, they were often very desperate. Art Spiegelman added this unique tone to the series through his illustrations of Jews helping each other. For example, on page 140 of “Maus: My Father Bleeds History”, or simply “Maus I”, Anja and Vladek are hiding in a barn one night.

All of a sudden, Vladek gets up and decides to journey to “Dekerta” to get food and supplies. During the Holocaust, Jews who were on the run or were hiding illegally would journey to Black Markets such as “Dekerta” because they would be discovered and turned in if they shopped anywhere else. After so much running and hiding, Anja became weary and she did not want to separate from Vladek again. In the top right frame of this page, Anja’s fear of loneliness made her desperate. The illustration shows Anja drawn in bold lines, reaching up from the bottom of the frame and surrounded by a background of black, jagged lines. She says to Vladek, “Don’t leave me alone again! I’m terrified when you’re gone.” The artist uses what Scott McCloud, author of “Understanding Comics”, calls “expressionism”. This is the idea that the inner turmoil of the character can be shown through somewhat abstract pictures, especially in the background of the frame. In this case, the picture shows Anja’s sadness and desperation.

Overall, the picture conveys Anja’s worried state, her dislike of being alone, and her survival instincts that tell her to stick together with others. Another Example of a desperate story tone in “Maus” lies in “Maus I”, or “Maus: And Here My Troubles Began”. On page 86, at the very bottom right frame, Vladek comes across a despairing soul who will die without his help. You see, towards the end of World War II, many of the Jewish prisoners from concentration camps were forced into train cars for weeks on end with no food or water. It is said earlier in the book that about 200 people were jammed into each of these animal cars, and they were effectively immobile due to overcrowding.

Vladek was among the lucky few who could reach the window of the train. From there, he could collect the only source of nourishment any of the Jews had at that point: the snow on the roof. This picture shows a scene of dark, cramped figures, but two light figures remain. One of these is a Jew in need of water. Desperate for snow to quench his thirst, he grabs his throat and screams, “Please! Please!! I beg you!”. Vladek sits above him in the picture, the other light figure. His eyes show sympathy for this desperate man, and he reaches his hand to him saying, “ ‘Okay. Give me some sugar, I’ll get you some snow…’ So I ate also sugar and saved their life.” In this picture, the darkness represents death, but the two people who help each other are lit up with the light of life.

When Vladek saw that the man was desperate, he worked together with him and saved his life. In short, the Jews helping each other in “Maus I” and “Maus II” add a definite tone of desperation to the story line. When the Holocaust was at its worst, resistance was extremely essential for the Jews. Art Spiegelman added this tone to the story of “Maus” through several of his pictures of Jews helping each other. On page 66 of “Maus II”, at the bottom of the page, one can see how the author has incorporated resistance into the story. In this picture, the dark silhouette of a guard stands in the foreground with their hands on their hips. The text says, “She made them to run, to jump, to bend until they couldn’t anymore. Then more, the same.” In the background, a large group of women stand next to each other in the light. Some of them lay on the ground and many are bending at the waist and knees, but they stand together in protest against the guard. The text says that, “For a few appels it went so, but nobody of Anja’s friends gave her out.

You can imagine what she went through.” Earlier that day, several of them had seen her try to escape punishment from the guard by hiding in the bunk beds, but none of them turned her in. They easily could have gotten her killed, but they stuck together and struggled for their friend. They stood up together for what was right. An “appel” was a daily routine at most of the concentration camps during the Holocaust, during which all the prisoners were numbered off over and over until they were all accounted for. This was to make sure no one had escaped during the previous night. Some appels could go for several hours. For Anja, the suffering of her friends, on her behalf, displayed not only resistance, but even rebellion. Here we also see the sense of light and dark again. All those who are united and help each other are lighter than the rest. These are the folks who will not live in vain because they stick together and help each other. The third tone that is shown throughout “Maus” when the Jews work together is that of perseverance. These particular pictures are among the few that touch the loving side of our hearts when reading “Maus I” and “Maus II”. Starting with “Maus I’, page 54, the center picture on the left of the page shows Vladek receiving a package from his wife.

He is smiling, which rarely happens, and glowing with a rather soft circle of white in a dark black world. Again, we see the use of expressionism that Scott McCloud describes, but this time the background is showing the inner joy and warmth of the character. One can also see that this frame overlaps the other panels around it, which shows its importance as a sign of perseverance for the reader. It is a sign of hope that lightens our spirits. More often than not, the reader witnesses Vladek and Anja being separated, but it is pictures like this that add a touch of joy to the story of “Maus”. A second showing of the Jews working together that displays perseverance, happens on page 34 of “Maus II”. During the Holocaust, all of the prisoners at the camps were given striped prisoner’s clothes upon entrance, but Vladek’s friend Mandelbaum had been given clothes that simply did not fit. Though one might think that this was no big deal, this small detail caused Mandelbaum much grief and lost him a spoon and many meals.

He was slowly dying of hunger, but Vladek was his friend, and would help him despite the cost. Vladek had made acquaintances with a General, and through some miracle, he secured a new set of clothes for Mandelbaum. Mandelbaum’s deep, emotional reaction shows the reader that by working together, the Jews could persevere. The third picture down on the right hand side of the page shows Mandelbaum and Vladek embracing and crying together. Mandelbaum cries out, “Sob-My God. My God. My God…It’s a miracle, Vladek. God sent shoes through you.” A single tear of happiness drips from his cheek, and his eyes show true gratitude. Mandelbaum is so grateful in this frame that he goes so far as to say that Vladek has done the work of God. By supporting each other, the Jews were able to survive hard times like these.

When the Jews worked together, they could get through anything. Art Spiegelman illustrates in his book series, “Maus”, that the Jews needed to stick together to survive the Holocaust. This concept is shown through images portraying the feelings of desperation, resistance and perseverance. The Jews stuck together to survive not only because they wanted to live, but because, as famed Football coach Vince Lombardi once said, “People who work together will win.” (“Vince Lombardi Quote.”) The few survivors of the Holocaust, such as Vladek Spiegelman, did just that: they won. So if you ever find yourself stuck between a rock and a hard place, remember what is really important. Work with your companions and together you will get through your struggles. 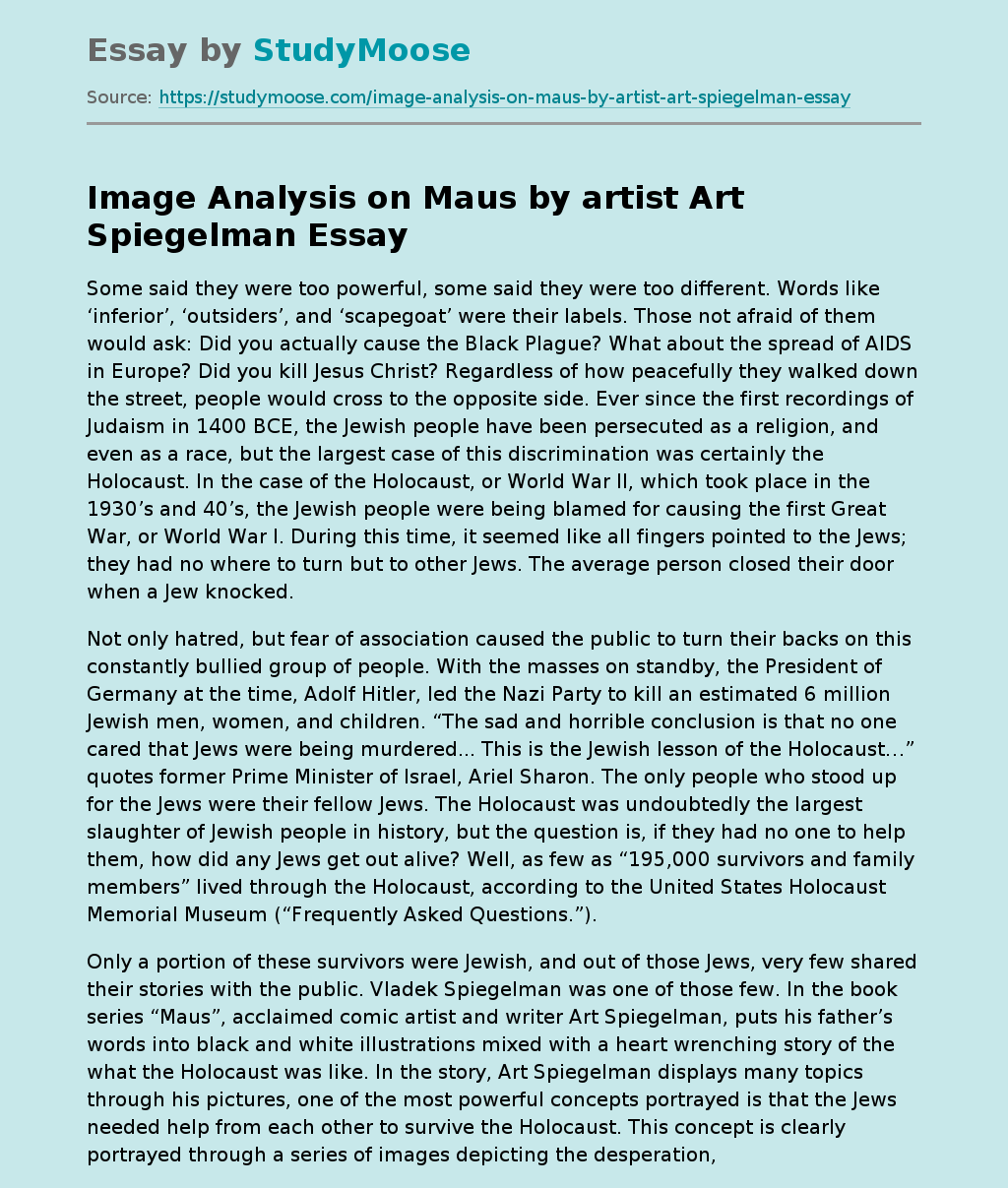