Energy Sources of the Future

A number of energy sources used in the world originate from the combustion of dead fossils formed in the 65 million years ago when remnants of dead vegetation and decayed animals (California Energy commission). These deposited fossils are extracted to produce a number of products like oil, coal, and natural gas that have continued to be the most crucial source of energy relied upon globally. However, there has been an increased overdependence on the use of fossil fuels as the main source of energy which has caused alarm as it is not renewable and cannot be replenished (Menuck & Goldstein).

Don't use plagiarized sources. Get your custom essay on
“ Energy Sources of the Future ”
Get custom paper
NEW! smart matching with writer

There are also some effects that arise due to the combustion of these dirty fuels. These problems include global warming which cause the atmosphere to over heat. In order to reduce global warming and to prevent exhaustion of fossil fuels, the use of alternative sources of energy is recommended and there is need to know more about the future forms of sustainable energy sources.

Several forms of energy sources have been suggested with the hope of reducing emission of carbon and the prevention of global warming (Menuck & Goldstein).

Some of the viable alternatives to fossil fuels that are environment friendly include nuclear energy, biofuels and hydrogen. While these options might be more expensive than conventional energy supplies, they can help solve the problem of overlain on fossil fuels. Renewable Energy Sources Renewable energy sources are obtained from natural processes that repeatedly take place in the natural environment (Valone). Renewable sources can be derived in different forms such as generation of geothermal power from the interior of the earth or solar power from the sun.

Apart from generating heat energy from solar and geothermal means, significant amounts energy can be obtained from wind, tides, biomass or biofuels, hydropower and hydrogen which are not only renewable energy sources but also sustainable (Valone). Renewable energy acts as an alternative to fossil fuels which can be used in various applications including heating, generation of power, and transportation (Valone). Geothermal Energy Geothermal energy is one form of energy source generated from heat originating from the center of the Earth (Valone).

Heat energy is generated from within the earth particularly from the Earth’s crust and is made available through geothermal heat pumps. It is costly to put up a geothermal station but the costs of operation are much lower hence it can be affordable for most appropriate sites. Geothermal energy can be tapped to the surface in areas where the Earth’s core is close to the surface and used to generate electricity (Valone). Power can also be generated using dry steam plants which get steam out of the earth and use it to rotate turbines that aid spinning of generators (Valone). Solar Energy

Solar energy is another form of alternative energy source to fossil fuels. Solar energy is obtained from the sun in the form of solar radiations (California Energy commission). The generation of solar power depends mainly on heat engines. Solar energy can be used in space heating and cooling as well as production of heat for industrial purposes. The success of solar energy technology is greatly depended on the mode of conversion and distribution. Photovoltaic panels harness energy by capturing sunlight and converting it to electricity which is used for lighting (California Energy commission).

In addition, the thin film converts any surface it covers to an electric power source able to run machines or proving light for use in industrial or home applications. Solar energy is more cost effective since there are no high costs of fuel involved in the harvesting of solar energy (California Energy Commission. ). In addition solar energy is environmental friendly as no emissions of gases are involved in the functioning of the power stations. This has led many firms that are sensitive in protecting the environment to using solar energy in the generation of electricity rather than using the conventional fossil-based means.

Unlike the fossil fuel energy, there are not much negative effects to the earth’s atmosphere (Valone). Hydro-electric power does not therefore pose dangers such as global warming typical to fossil energy sources. The combustion systems involved in fossil fuels which emit dangerous gases such as carbon are avoided in hydro-electric power stations. This makes hydropower to be a safer and clean alternative to conventional production of energy using fossil fuels (Valone). Biomass Biomass contains energy from the sun stored in the form of carbon (Simmons).

The sun’s rays are captured by the plants in the process of photosynthesis. The energy is then released when plants are burned. Contrary to burning fossil fuels which have carbon from long dead organic matter on the Earth’s sediments, biomass gas cleanly burns yielding water vapor as the byproduct and small quantity of carbon dioxide that was absorbed by the plant material during photosynthesis (Simmons). This is a renewable kind of energy for long as plants used to produce biomass are continually being cultivated. Biofuels

Another form of biofuel is derived from fats and oils by the process of transesterification (Simmons). This product of transesterification is known as biodiesel and it is mainly used as a diesel additive in the reduction of carbon monoxide and hydrocarbons from diesel motorized vehicles. Biofuels are mostly used in farm estates but a steady increase in the manufacture of flexible fuel vehicles that can operate on a range of fuels ranging from pure gasoline to ethanol blends has seen the expansion of biofuel production in the market.

This has also worked out as an advantage since drivers are able to choose the preferred type of fuel according to availability and cost (Valone). Wind Energy Wind energy is another form of clean and sustainable energy source obtained from wind power (Simmons). The wind speed rotates the turbine which in turn generates power. Wind power stations are mostly situated in areas with strong and constant wind such as off shores and high altitude areas.

Wind power is mostly used in the production of electricity hence helps in the reduction of overdependence on conventional sources of energy such as fossil fuels. Since wind power is renewable and does not emit dangerous gases during operation it forms a clean and sustainable alternative to fossil fuels (Valone). Nuclear Energy The other most important form of clean and renewable energy is the nuclear energy which us produces in the process of atom splitting and nuclear fusion. Uranium isotope 235 is heavily bombarded and splits due to the impact of the neutrons (McCarthy).

The splitting liberated an immense amount of energy in form of heat that can convert water into steam. The steam is then used to drive turbines thus generating electric energy. Nuclear energy can also be obtained as a result of joining uranium atoms or nuclear fusion (McCarthy). The nuclei particularly from lighter elements join to form relatively heavier nuclei hence liberating immense heat energy. Theoretically, this form of energy seems a possibility but no attempts have yet been made to make nuclear energy.

This is because of the negative effects often associated with nuclear energy such as harmful radioactive waste products of uranium (McCarthy). It is expected that nuclear energy will gain its significance as fossil fuels escalate in process and as alternative energy sources fail to be developed. However, without a proper way of handling radioactive wastes from uranium, the existing demerits of nuclear energy outweigh the benefits Conclusion Over many years, fossil fuel has been depended upon as the main source of energy.

However, the emergence of clean sources of energy has played a big role in ensuring less emission of dangerous gases that causes global warming hence promising a peaceful future of humans on the planet Earth. These new technologies will also reduce the overdependence on fossil fuels since once renewable energy sources are embraced, the existing pressure on fossil fuel which has increased prices will eventually reduce. Contrary to conventional fuels, renewable sources supply fuel in quantities that are efficiently unlimited.

Energy Sources of the Future. (2016, Sep 10). Retrieved from https://studymoose.com/energy-sources-of-the-future-essay 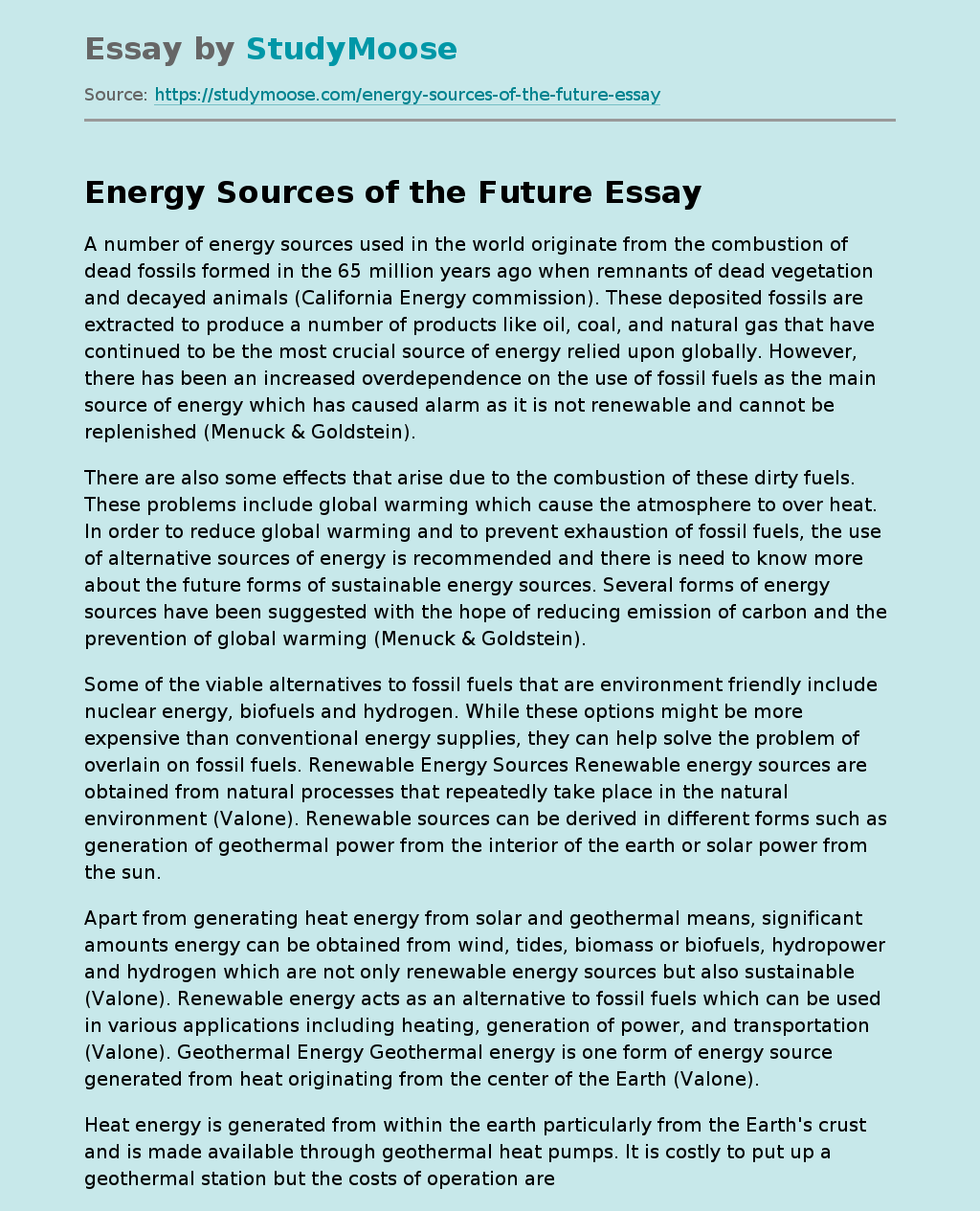