The author of this text is Yuan Ch’iung-ch’iung, popularly called Yuan Qiongqiong. She is a Taiwanese writer, and she wrote during the Boudoir literature period. The characteristics of texts written in this period, is that they focuses on women’s issues. In this analysis, I will mostly focus on the characters, together with some literary devices such as climax and setting. The action takes place in a crowded bus, most likely in the 80’s due the fact that the story was released in that time frame.

Don't use plagiarized sources. Get your custom essay on
“ Empty Seat – Analysis ”
Get custom paper
NEW! smart matching with writer

I find the story to don’t have a crystal clear climax; however, if I were to choose one, I would choose the part where the protagonist leaves his seat. Empty seat is a short story about a man entering a bus, who sat down at the first empty seat he spotted. Some moments later he heard a strange sound, and he didn’t realize where it came from because of some background noise.

After a while, he found out; the woman next to him was sobbing. He immediately leaned away from the woman, because he didn’t want people to think that he had something to do with her. Despite this, the other passengers still looked at him with a strange look, among them a college boy.

He stared at the protagonist, who is the man, but he looked away as soon as the man returned the look. The man tried to signal that he hadn’t done anything mean against the woman, but it seemed like nobody realized that he was a stranger to the woman.

He couldn’t handle the situation, so he left his seat next to the sobbing woman, and stood beside the college boy instead. They smiled to each other, and then the man realized that the collage boy sat there before him. He and the college boy then watched a new passenger take the seat. We don’t get to know a lot about the characters in the story, but it’s possible to tell a fairly accurate description of them by reading the text. The man who entered the bus, and then sat down next to the sobbing woman, is without a doubt the protagonist.

The whole story is centered around his experience on the bus, and the narrator tells about the man’s movements. The story doesn’t tell us anything about the characters other than their genders, or where the action takes place. This makes it impossible to give a description based on facts. Despite this, I will still try to give a description of it based on my thoughts. I think that the man, who entered the bus, and the woman who were sobbing, is fairly the same age. The reason behind this is because the protagonist thought that the other passengers on the bus thought that he was the one that had hurt her. If an obvious age difference was involved, I don’t think that he would have cared.

I think that the story takes place in Taiwan, since the author of this story is a Taiwanese writer. It is also not a bad idea to think that the author may has experienced something similar on a bus, which led her to writing this story. The three characters in this story, which are the collage boy, the sobbing woman and the man, don’t seem to know each other. If either the man or the boy knew the woman, they would most likely be sitting next to her and tried to comfort her. The man also tried to prevent that people would think that he knew her. I personally enjoyed this story a lot, and I would recommend it to a friend. It was both interesting to read, and it tells about parts of today’s society in a fascinating way. 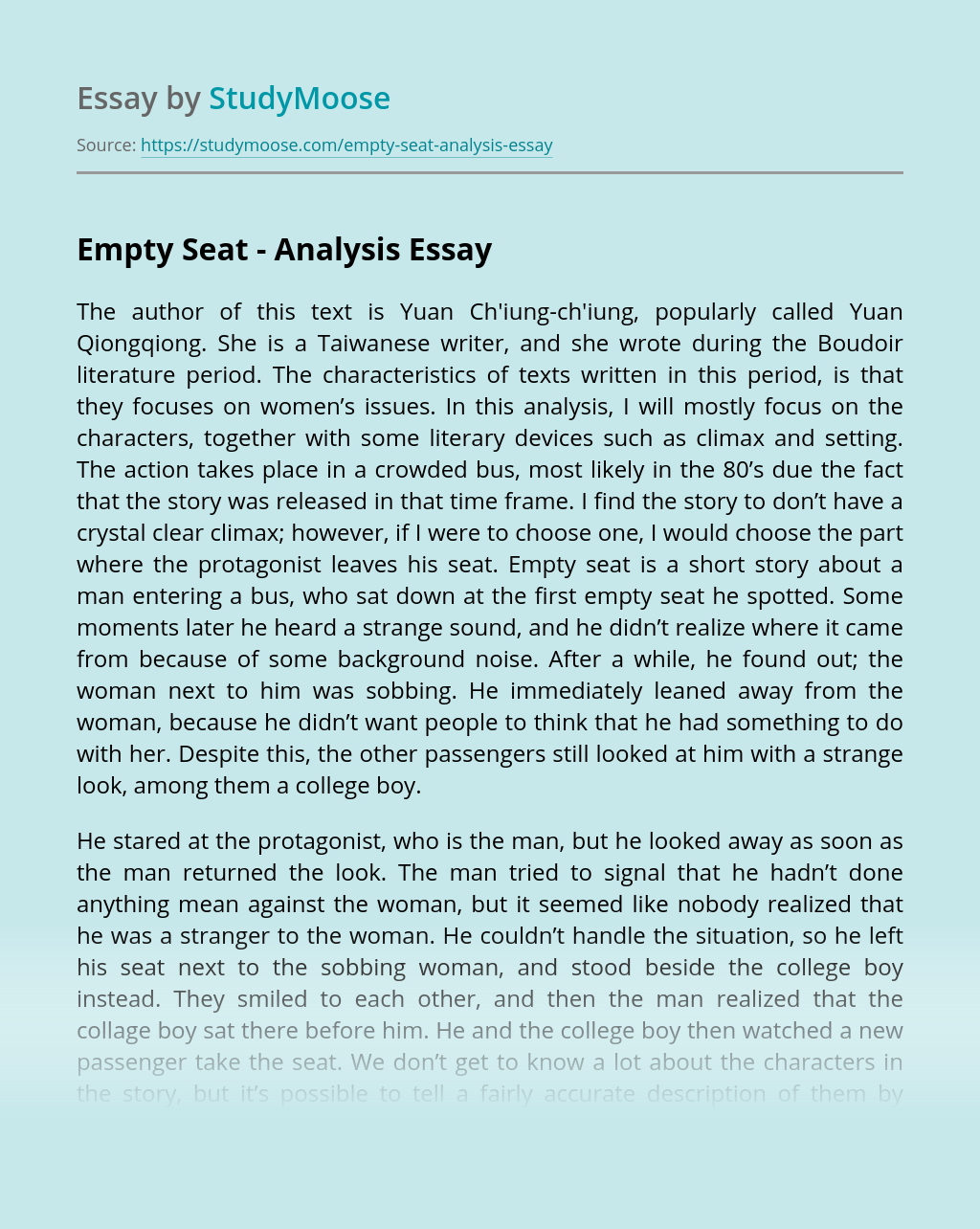