Elia Kazan’s screen version of A Streetcar Named Desire emphasizes a unifying element for all four of the main characters; they all need something in their lives but are hiding behind bad habits and behaviors since they cannot attain that need. Their separate journeys’ paths cross in these scenes, with Blanche at the center of it all. While Stella is trying to find a way to accept who Stanley truly is since he has come to provide her with her identity; and Stanley is trying to live his life in his way for his own benefit; and Mitch is trying to make a life for himself without his mother; it is Blanche who Kazan focuses on.

Don't use plagiarized sources. Get your custom essay on
“ Elia Kazan’s Film Version of “A Streetcar Named Desire” ”
Get custom paper
NEW! smart matching with writer

He strives to generate greater sympathy for Blanche then the play’s text does, with the original text more focused on her rapid spiral into madness. Here, Kazan attempts to show what is at the bottom of Blanche’s every action – a need for “Protection.

A haven, a harbor. She is a refugee, punch drunk and on the ropes, making her last stand, trying to keep up a gallant front, because she is a proud person…She is really hopeless.” (368) This need for shelter is seen in the play’s text when Blanche tells the doctor that she has “…always depended on the kindness of strangers” (Scene 11) and it is this need that Kazan plays on.

While the play often emphasizes the outfits Banche is wearing, Kazan has her wear one main outfit per scene, as if to symbolize the different steps Blanche is going through to find her protection.

Each scene is a different attempt on her part to reach her goal of security and protection. Due to the censors of the time, we do not see any mention of Blanche’s husband having been gay, but we do see that his loss has weighed on her greatly.

We also see that she has searched for this protection in numerous places, including in the arms of a minor. By coming to Stella and Stanley’s home, Blanche is looking for the protection with them but, instead, she creates an enemy that can bring about her ultimate downfall. It is here, as she looks to find peace with Stella, that Stella’s need for justifying who she is in regard to Stanley comes to the forefront for Stella; Kazan has this need for self be realized in the changed final scene as Stella leaves Stanley.

Kazan does keep certain components from the play’s text and uses them to the benefit of his vision for the film. One component that is used well is the music we hear throughout the play and film. In the film, it is well used to represent a change in tone in the movie when the music stops, or when the music increases or decreases in tempo, or when the music got louder or quieter. It serves as another character in the film. This use of sound, or lack thereof, is also utilized by Kazan in the scene where Stella returns to Stanley after he hits her. This scene is made to be very tense through lack of dialogue, use of music, and slow movements from Stella down the stairs. 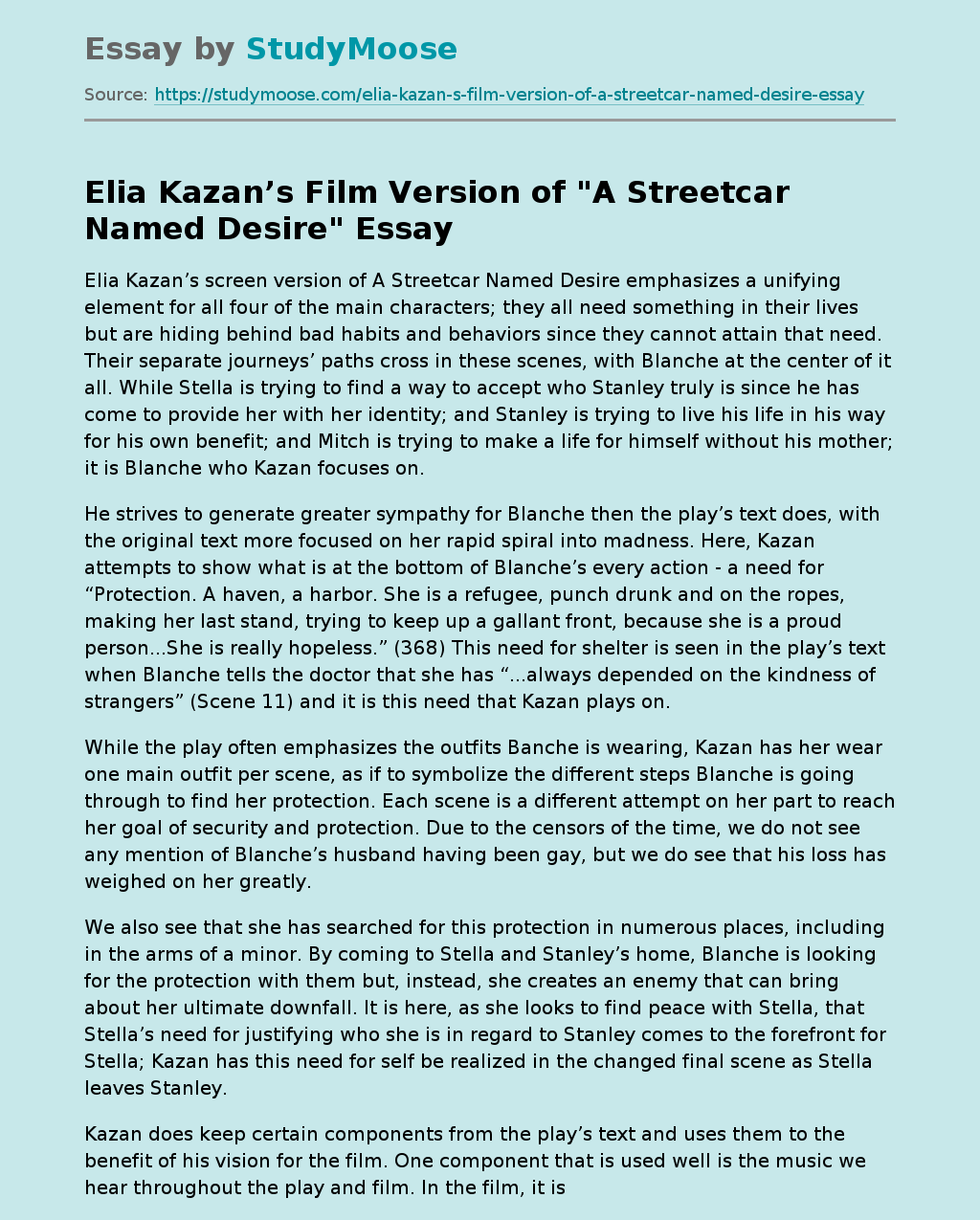