CHAPTER 1
Introduction
Nowadays, technology is already taking over the world. They use technology in different ways. It is a big help especially in communicating. Social networking sites are products of technology and also one way of communicating with each other. Everyone is fond of using social networking sites. They consider it as a part of our daily lives. They love sharing pictures, expressing our feelings and thoughts, and blogging about new things. Almost everyone uses Facebook, Twitter, Tumblr, Instagram and many more.

Don't use plagiarized sources. Get your custom essay on
“ Effects of the Social Networking Sites to the Study Habits of the 4th year High School Students ”
Get custom paper
NEW! smart matching with writer

They enjoy using them especially teenagers. They share almost everything they do and express their unsaid thoughts, ideas and emotions.

For the 4th year students, they really need to have a good time management because they need to imply the requirements they are obligated to do in order to graduate from high school. They need to be responsible in dividing our time in many things but how come that they can still find time to use these social networking sites?

Background of the Problem
One of the obligations of the teenagers is to study. Their role is to become a hardworking student and a good child to their parents. As students, they are expected to give their best in their studies to have good grades. Their parents give every effort they can give to send their children in school with a high quality education. Nowadays, there are a lot of ways in improving the way of educating the students. Technology is one of those. Technology like internet can help to broaden the knowledge of a student and makes it easier for them to study but technology can also be a reason for the students to limit their knowledge in what they can get from here. Internet is the best and easiest contribution of technology in terms of communicating, researching and studying.

All of these in just one click. Internet cannot only help the students in doing their home works and researches but also in communicating and socializing. There are a lot of websites used by the teenagers to socialize. These websites are called Social networking sites. In these sites, they can chat with their friends and share photos and thoughts with them. These sites are also used in advertising products that can be useful for the students. These sites are a good invention but they also have disadvantages to the people especially to the students. Good study habits are important in maintaining good grades in school but students tend to overuse these social networking sites which limit their time in studying. They were expected to spend more time in studying but because of these social networking sites they tend to be distracted.

They spent most of their time in using their social networking sites and lessen their time in studying. As time goes by, the situations are getting worse. There may come to a point where students will just use their social networking sites instead of studying which may lead to a bigger problem like affecting their grades and way of learning. It may cause their laziness and non compliance in their subjects. These problems may lead to the bad academic performance.

Statement of the Problem
The researcher primarily aimed to know how the networking sites affect the study habits of the 4th year students in Divine Light Academy. This study is purposively conducted to know the advantages and disadvantages of the social networking sites to the graduating students and their way of studying.

Specifically, this study ought to answer the following questions: 1. Before, students used to concentrate with there studies but now that social networking sites are invented, how does they spend their time in terms of studying?

1. The 4th year students of Divine Light Academy are spending so much time in using social networking sites.

2. They spend less time in studying.

3. They have poor study habits and time management.

1. The 4th year students of Divine Light Academy spend less time in
studying when they are using social networking sites

2. They are used of doing their homework and researches while using their social networking sites.

Process * Observing their performance in class and if they can comply to the requirements * needed in their subjects.

* By just simply observing, the researcher
will know if the student’s performance is
satisfying or not.
* By asking about their study habits, the
researcher will know the reason why their
class performance is satisfying or not.
* They would feel and know that they need to
* improve their study habits and avoid or
lessen the distraction.
* The lack of study habits can be change with
* the questionnaires that are given to them.
Definition of Terms
1. Academic Performance- the basis for your overall grades. 2. Blogging- is a way of sharing comments, opinions or articles in internet 3. Communicating- is to impart; to reveal or to share

9. Social networking sites- are the websites wherein you can socialize with other people. 10. Socializing- is to render socially
11. Students- the beneficiaries and the ones who absorb all the things that the teachers are teaching. 12. Study habits- is the act of acquiring knowledge or application of the mind in a usual or customary time. 13. Teenagers- youth with between 13 and 19 said of age.

14. Time Management- this is the skill to manage your time to finish the things that you wanted to accomplish. 15. Tumblr- a social networking site wherein you can blog any photo, video, quotes or even an article about any topic you want. 16. Twitter- you can share or tweet (as what term used in that site) about anything using 140 characters only. 17. Websites- the pages you used when your using internet

By observing and asking them about their studies and daily routine, we can know if their studies are affected by their addiction of social networking sites. We can observe if they are doing well in their class and if they can concentrate to their studies without being distracted. By just simply observing, the researcher will know if the student’s performance is satisfying or not. The researcher can interpret the data gathered to know the reason why their class performance is like that. The interpreted data will give the researcher the conclusion to the problems stated in the study.

Effects of the Social Networking Sites to the Study Habits of the 4th year High School Students. (2016, Mar 25). Retrieved from https://studymoose.com/effects-of-the-social-networking-sites-to-the-study-habits-of-the-4th-year-high-school-students-essay 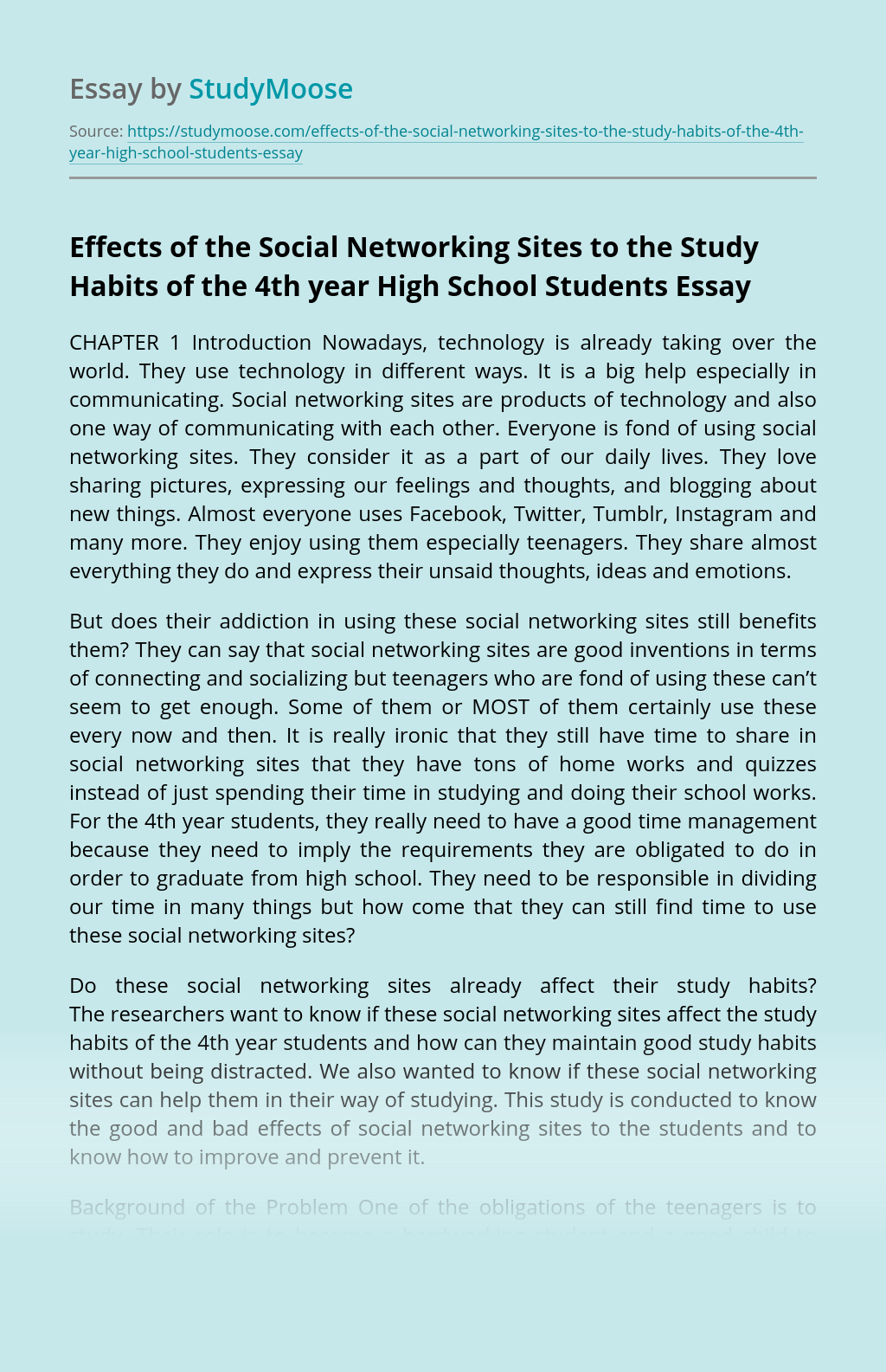