Effects of the Great Depression

The Great Depression began on October 29, 1929 and lasted until 1939 of April. It not only affected Georgia it affected all of America. During, October 29, 1929. There was a massive stock market crash causing America to go into a rage, this day is also called “Black Thursday”.

Don't use plagiarized sources. Get your custom essay on
“ Effects of the Great Depression ”
Get custom paper
NEW! smart matching with writer

The stock market crash of 1929 put the most devastating impact in U.S history. This crash helped trigger The Great Depression in a huge fire. Before the crash people of America thought the stocks would never stop rising, it was to their surprise it trembled drastically. The 1920s was a time where people defined themselves. They broke out of the traditional standards of that time. Americans changed clothing fiercely. Women began to wear more empowering clothing, that made them feel free and not as constricted to the same moral style.

They took off the gigantic hats and put on something more dainty and soft. Men in 1910 wore dressy casual clothing with a nice hat. In the 1920s, men wore more classy suits and bowties usually accompanied with a hat of somesort. The 20s was a time to be free and express yourself in your own way. It was no doubt the 20s was a time of change, freedom, and a new era, which is why it was called “The Roaring 20s”.

Unfortunately, all good things must come to an end. The stock market crash came with great surprise, it was unexpected until a few days before. Because of this nightmare people rushed to the banks to get money before anyone else, a lot of people had this same idea and the banks were overcrowded with people asking for money. This put the banks in debt and causing them to shut down all across America. There were very few banks in the United States because of this.

Many people placed all of their hope in the Federal Reserve System. This system was first made in 1913 to make a more flexible and stable financial system. This system is the central bank of the United States and controls all of the money. Americans thought this would save them from any distress that they would face, it didn’t. The problem that these people faced was the over production of wheat. After World War 1, many soldiers were coming back from the war and needed food, causing farmers to plant more wheat and grow more crops for the soldiers. Shortly after all the military had gotten their food, and everything was back to somewhat normal, the farmers were still growing wheat. Since all farmers were growing large portions if this crop, there was a lot of it. In fact so much, the price lowered so more people would buy it.

Another bad effect of the Great Depression was the overall health of the state because most people didn’t have good nutrition and a healthy diet. Sickness happen very often. Three main sicknesses during these times were pellagra, tuberculosis, and malaria. Not many hospitals or clinics were available, and in some locations the sickness became a catastrophe. Most Georgia homes at the time didn’t have electricity or running water. This further made sicknesses harder to fight and get over. No medical treatment locations was also a factor in poor health of many Georgians. Because food was not often available, people had to eat what they could find, which sometimes was things like, molasses, fat back, or corn meal.

The effect that The Great Depression had on Georgia was devastating. Some of the people that suffered the greatest of them all in the depression, where the children. Because of the bad economy and lack of money, many families found it difficult to be able to give their children the basic things like, food, water, and toys. Just prior to the biggest peak in the depression, a severe drought, along with a bad insect swarm caused many crops to fail. Because the crops failed farmers had little money and couldn’t supply another crop to be harvested. This started a shortage of food. Unlike crops that are sold for food, like animals and people, another type of rop is cash crop which is sold instead of used for personal food. Out of desperation, farmers planted cash crops every place, on every piece of land they could find to be able to get as much money as they could. Unfortunately, this caused issues for the soil because the soil began to lack the proper minerals need in order to grow a good crop. As tragic as the great depression in Georgia was there were some very positive literary writings that came out of the experience. Books such as Old Lady’s Shoes, and Grace Lumpkins Novel called, To make My Bread were written about the hard times and the experiences of many during the Great Depression. In conclusion Georgia had many hard and rough days, but fought through the unyielding battle. Though it was a hard to win fight, the patriotic Americans won and brought many good things out of the Depression. The Depression brought out what not to do in the future of our country, to help prevent other mishaps with America.

Effects of the Great Depression. (2021, May 19). Retrieved from http://studymoose.com/effects-of-the-great-depression-essay 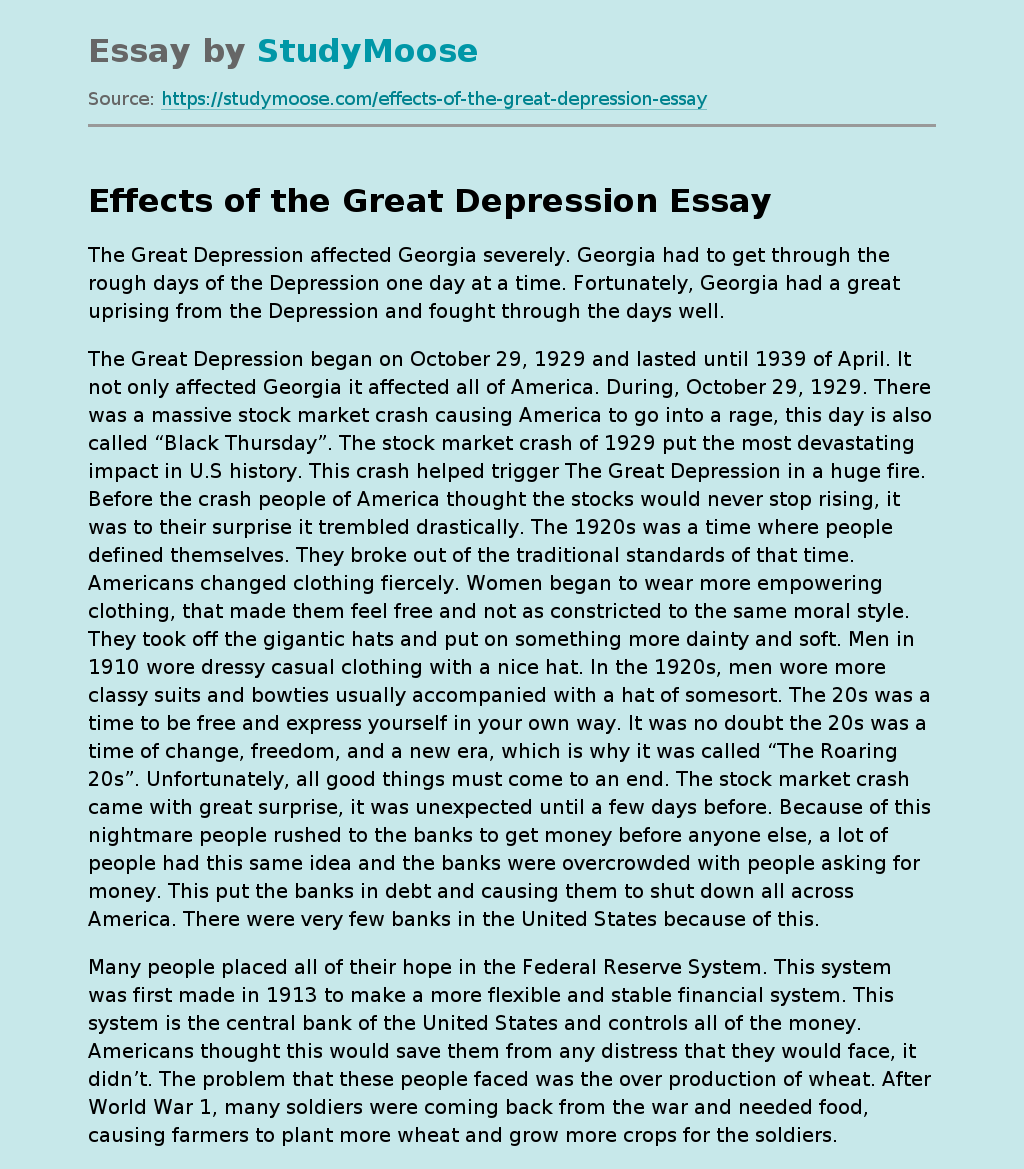