Effects of Globalization on the Environment

Globalization has had a huge impact on the world in a number of ways. It has increased the integration of countries’ individual economies, the rise in the world trade and multinational companies, and the effect of large amounts of money moving in and out of economies throughout the world. People around the world are more connected to each other than ever before. Information and money flow more quickly than ever before. In addition goods and services produced in one part of the world are increasingly available in all parts of the world.

Turn in your highest-quality paper
Get a qualified writer to help you with
“ Effects of Globalization on the Environment ”
Get high-quality paper
NEW! AI matching with writers

International travel and communication in now more frequent and has become commonplace throughout the world.

It can not be denied that globalization has had an overwhelming positive influence. Millions of jobs have been opened up through the ever increasing productivity and efficiency of the global economy. Globalization for less developed countries has encouraged faster growth, in turn promoting poverty reduction, democratization and higher labor and environmental standards. It also gives citizens greater individual freedom to express views and experience cultures through such mediums as television and the internet, which encourage understanding around the world.

This fairly new glorified issue has had a great impact on the global environment in addition to all other aspects of the world that it has affected. One of the greatest examples that come to mind is the endless support of the tsunamis victims. Without globalization the world could not have contributed to the extent of what we have. Relentless support has been granted to the victims of this tragic event in record time.

Globalization has made this possible through the increase in technology and communication.

Citizens of the world now have the ability to contribute time, money and supplies to countries that would otherwise be stranded or left hanging for a period of time. Our valiant efforts have put this epic event at an all time support relief. We are now able to send support in all forms more conveniently. Without the effects of globalization this event that has occurred would have been much more devastating. The world can thank globalization for this never ending support.

In addition to the tsunamis relief support granted through globalization, it has affected the environment in other ways as well. It has greatly increased the environmental standards worldwide. Through the development of the internet many environmental agencies have evolved which have increased the protection of the environment. The internet has made them more effective and they are now able to communicate much easier than ever before. Through the development of environmental supports some beneficial factors have evolved such as new up to date emissions standards. This greatly reduces the worldwide threat of global warming. By agencies effectively implementing such standards our world has become safer and healthier.

These efforts are now on a continuum which only leaves our world to improvement. Globalization is the reason for this and without it our world would be at risk of inevitable destruction. Through the efforts of environmental agencies we as a world are now aware and informed of the dangers of what used to be every day practices. We can thank the rise of globalization for our continuing efforts for world wide environmental improvement.

Effects of Globalization on the Environment. (2016, Jul 19). Retrieved from http://studymoose.com/effects-of-globalization-on-the-environment-essay 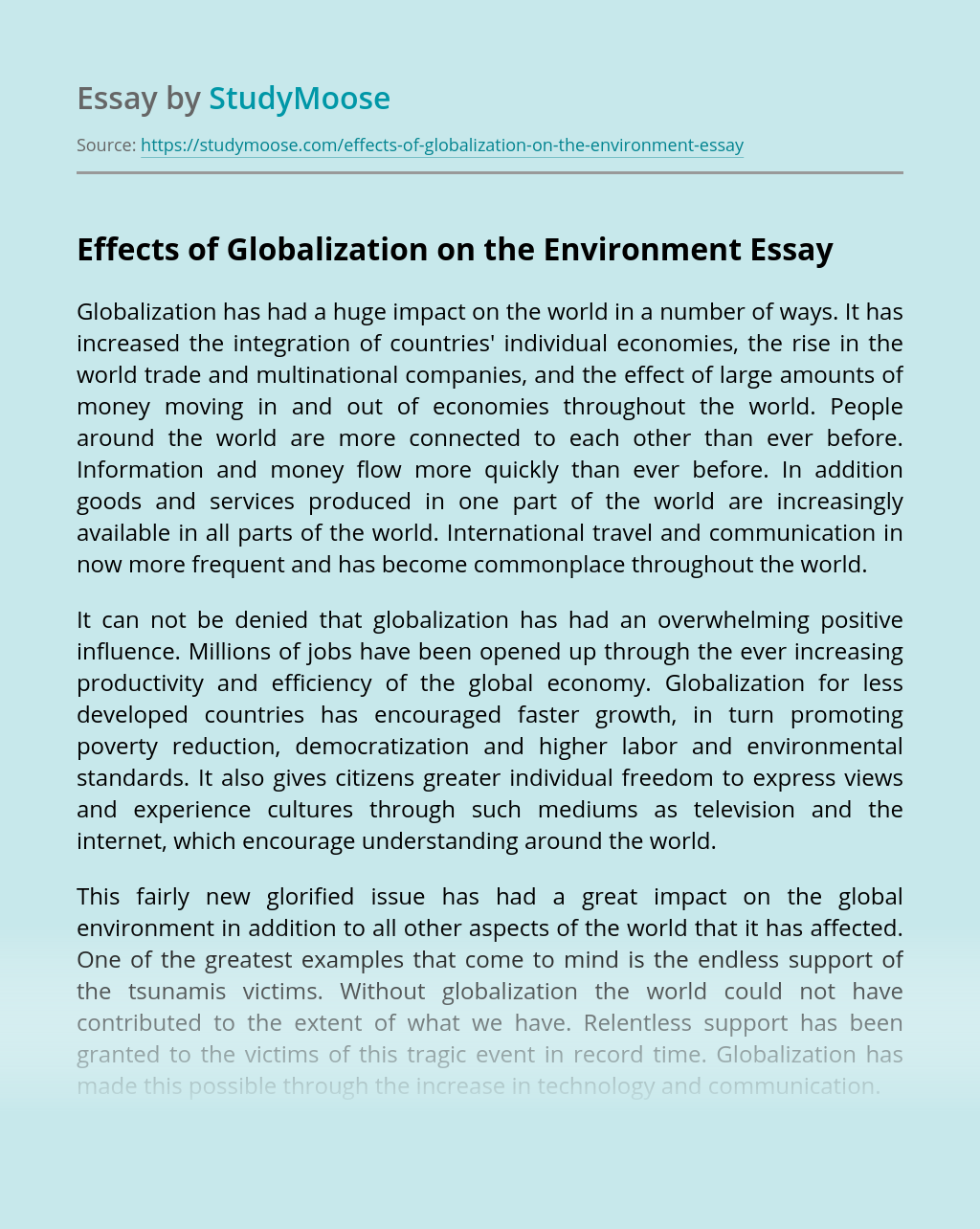 Turn in your highest-quality paper
Get a qualified writer to help you with
“ Effects of Globalization on the Environment ”
Get high-quality paper
Helping students since 2015
Stay Safe, Stay Original