Tar is a sticky brown substance produced by cigarettes that can stain a smoker’s fingers and teeth yellow/brown. It is also sometimes known as total particulate matter and is inhaled when a cigarette is smoked. Some of the chemicals in tar include benzene and benzo(a)pyrene.

Tobacco smoke contains many harmful gases that can be damaging to the body such as carbon monoxide, formaldehyde, hydrogen cyanide, ammonia and acrolein.

Passive smoking is involuntary smoking by non-smokers inhaling the smoke of others.

Don't use plagiarized sources. Get your custom essay on
“ Effect of Smoking on Breathing, Gas Exchange & Pregnancy ”
Get custom paper
NEW! smart matching with writer

Nicotine is the addictive substance in cigarettes, it is what causes a smoker to crave another cigarette and therefore carry on the habit. The more nicotine a smoker consumes, the more they will crave and so the more they will smoke. This means that they will be inhaling more toxic substances into their body, particularly the lungs, and this affects the breathing system as these substances will damage the lungs and cause a reduction in their ability to function properly.

One of the main functions of the respiratory system is to provide the body with oxygen so that it can be delivered to vital cells that require oxygen to function. Oxygen is carried in red blood cells by reaction with a substance called haemoglobin to form oxyhaemoglobin. However, haemoglobin has a high affinity for carbon monoxide and if it is present it will react with the carbon monoxide instead of oxygen to form carboxyhaemoglobin. This occurs during smoking as cigarette smoke contains carbon monoxide, this means that the cells in the body of a smoker will not receive as much oxygen as those of a non-smoker and they may become short of breath as their lungs are forced to work harder to compensate for this. Once the haemoglobin in a red blood cell has reacted with carbon monoxide it will never be able to react with oxygen and so it is of no use for its intended purpose. This means that a smoker will have fewer red blood cells that are able to carry oxygen than a non-smoker.

Smoking is the most common cause of chronic bronchitis. It stimulates the production of mucus in the lining of the bronchi and thickens the bronchi’s walls and those of the bronchioles resulting in the narrowing of these air passages. This means that less air is able to reach the lungs and heavy mucus or phlegm is coughed up. These passages then become more susceptible to infections, causing further damage.

Emphysema is also largely caused by smoking and is often accompanied by bronchitis. It is a disease in which the alveoli become damaged. Often this is because of the harmful chemicals present in cigarette smoke that pass through the walls of the alveoli when it is inhaled. The alveoli over-inflate and eventually burst and blend to form fewer larger air sacs, reducing the surface area over which gas exchange can take place. This significantly impairs oxygen and carbon dioxide exchange and the sufferer will have to breathe faster and heavier to compensate for this. Over the years the lungs also become less elastic as the tissue is destroyed due to chemical imbalance and this reduces their efficiency.

This is a term given collectively to many diseases of the lung including chronic bronchitis and emphysema.

Lung cancer is often caused when the harmful chemicals in cigarette smoke cause cells in the lung to mutate. These cells then multiply and spread, often forming a tumour, which can grow big enough to block the respiratory tubes and therefore prevent oxygen from reaching the lungs.

Smoking has been proved to significantly affect fertility in both women and men. Studies have shown that women who smoke are likely to take longer to conceive than women who don’t. In men, smoking can impair sperm production and sometimes this will reduce the chances of a couple having a boy, as the y-chromosomes in the sperm are more vulnerable to the toxins of cigarette smoke.

Affects on the Foetus

When a woman is pregnant, she provides for the baby through her own body and what she takes into her body will also reach the baby. This means that when a pregnant woman smokes, many of the toxins that are affecting her body are also affecting the foetus. Like the mother, the foetus will have decreased oxygen levels and increased nicotine and carbon monoxide levels, which will get into the placenta and prevent the foetus from receiving the vital food and oxygen needed for it to grow. For this reason, babies born to mothers who are smokers are often underweight, resulting in many health problems. Women who smoke are also more likely to miscarry

A Child Whose Mother Smoked During Pregnancy 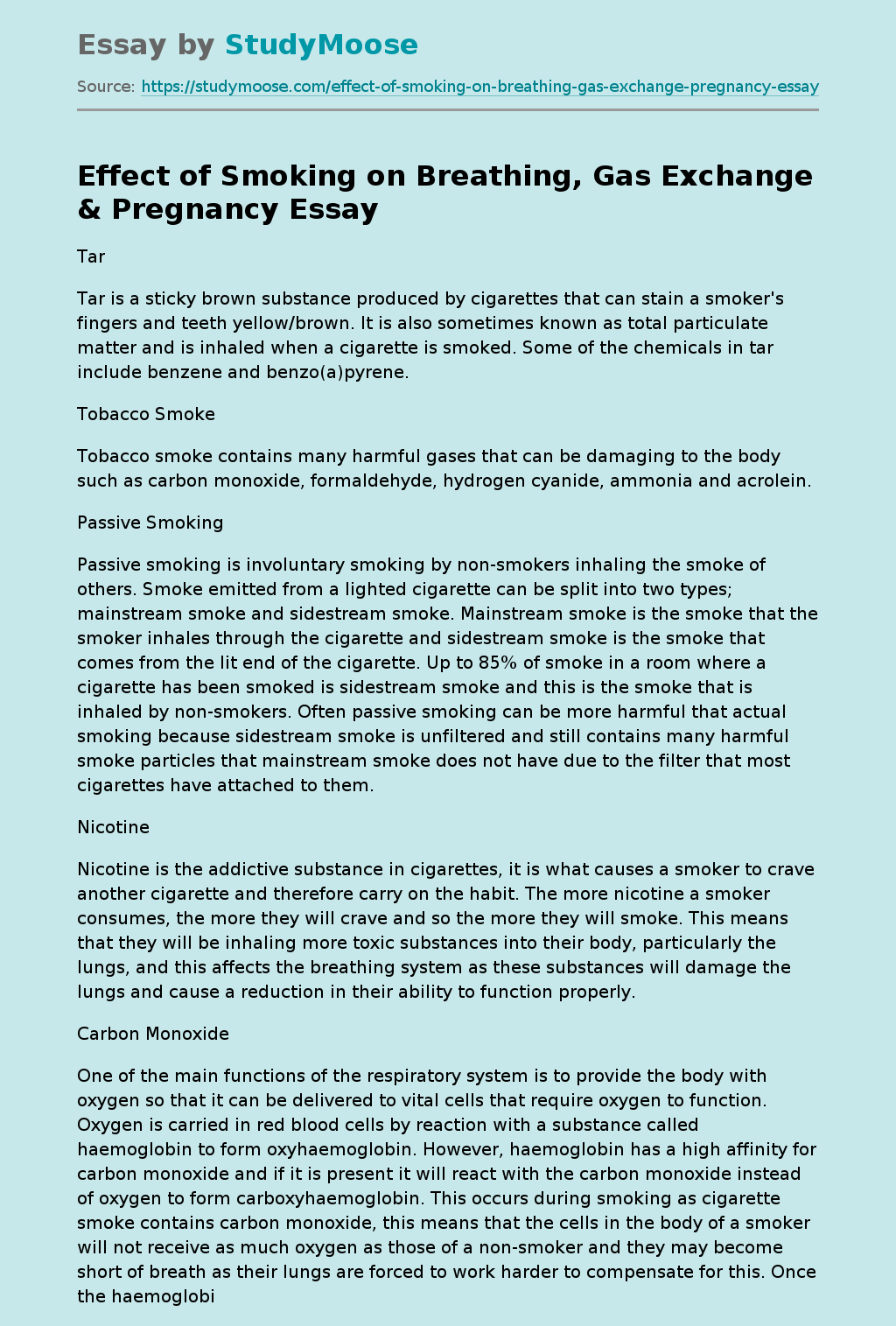