Control of Breathing - An Overview

An essay on the mechanism of breathing and its control

The basic mechanisms involved in inspiration and expiration are as follows;

The contraction of the diaphragm and external intercostals muscles leading to an expansion of the lungs. This expansion means there is an increase in the volume of the thorax and a decrease in intrapulmonary pressure. A pressure gradient is therefore established from the atmosphere to alveoli, hence air being suck into the lower pressure in the lungs called inspiration or breathing in.

Turn in your highest-quality paper
Get a qualified writer to help you with
“ Control of Breathing – An Overview ”
Get high-quality paper
NEW! AI matching with writer

This involves the relaxation of inspiration muscles and contraction of internal intercostals muscles decreasing the size of the lungs. This decrease in the volume of the volume of the thorax leads to an increase intrapulmonary pressure. A pressure gradient is established from alveoli to atmosphere, with air being pushed out to the atmosphere into the lower pressure. We call this expiration or breathing out.

Control of the ventilation mechanism

The ventilation rate is controlled by a respiratory system situated in the hindbrain.

In this centre there, there are three separate areas

2.the apneustic area, located in the pons, capable of activating the inspiratory system and prolonging its action.

3.the pneumotaxic area, also located in the pons, acting on the inspiratory centre to turn it off when the lungs become overstretched or full of air.

During normal breathing impulses from the Inspiratory Centre stimulate the contraction of external intercostals muscles and diaphragm, and inhibit the expiratory system for about 2 seconds.

This is achieved by reducing the time that the inspiratory centre is active, which in turn reduces the duration of the activity of the expiratory centre, thus increasing the ventilation rate. The extra carbon dioxide is eliminated and more oxygen is available to supply the muscle cells during increased exercise. When the carbon dioxide levels return to normal, the resting rhythm is re-established. A decrease in the level of the carbon dioxide in the blood has the opposite effect and decreases the rate and depth of ventilation.

Inflation reflex or Hering Breuer reflex can be described as the stretching of the bronchi and bronchioles walls. Stretch receptors in the walls, if stimulated during excessive inspiration, send sensory impulses via the vagus nerve to the respiratory centre, and the inspiratory and apneustic areas are inhibited so that expiration occurs and the lungs deflate.

Other factors which can influence the rate of ventilation are;

1.a sudden increase in blood pressure detected by baroreceptors in the aortic arch and the carotid bodies may decrease the ventilation rate and, on the contrary, a decrease may increase it.

2.a rise in body temperature such as may occur during vigorous exercise or during illness, can cause an increase in ventilation rate.

To begin with a very basic similarity that the rates of both can be influenced by a number of factors, due to the changing needs and activities of the body. The medullary rhythmicity centre (involved in the controlling the basic rhythm of ventilation), and the cardiovascular control centre can both be found in the medulla oblongta of the brain. Both of these control centres are also split up into 2 individual centres situated in the medulla oblongta. The medullary rhythmicity centre consisting of the inspiratory centre and the expiratory centre, and the cardiovascular control centre consisting of the cardioacceleratory centre and cardioinhibitory centre. The centres in the medulla oblongta are involved in either speeding the rate or slowing it down. Both centres receive information from receptors, in the case of breathing from chemoreceptors in the medulla oblongta that detect an increase in the hydrogen ion concentration, and in the case of heart rate from baroreceptors present in the walls of the carotid sinuses, the aortic arch and the venae cavae.

Both systems involve reflexes by stretch receptors which control the rate of breathing and heart rate. Both the control of heart rate and control of ventilation work antagonistically. Stimulation of the heart by the sympathetic system increases the heart rate, but stimulation by the parasympathetic system decreases the rate. The two centres located in the pons involved in the control of ventilation also work antagonistically; the apneustic area capable of activating the inspiratory centre and prolonging its action, and the pneumotaxic area, acting on the inspiratory centre to turn it off when the lungs become overstretched or full of air.

Control of Breathing - An Overview. (2016, Jun 19). Retrieved from https://studymoose.com/control-of-breathing-an-overview-essay 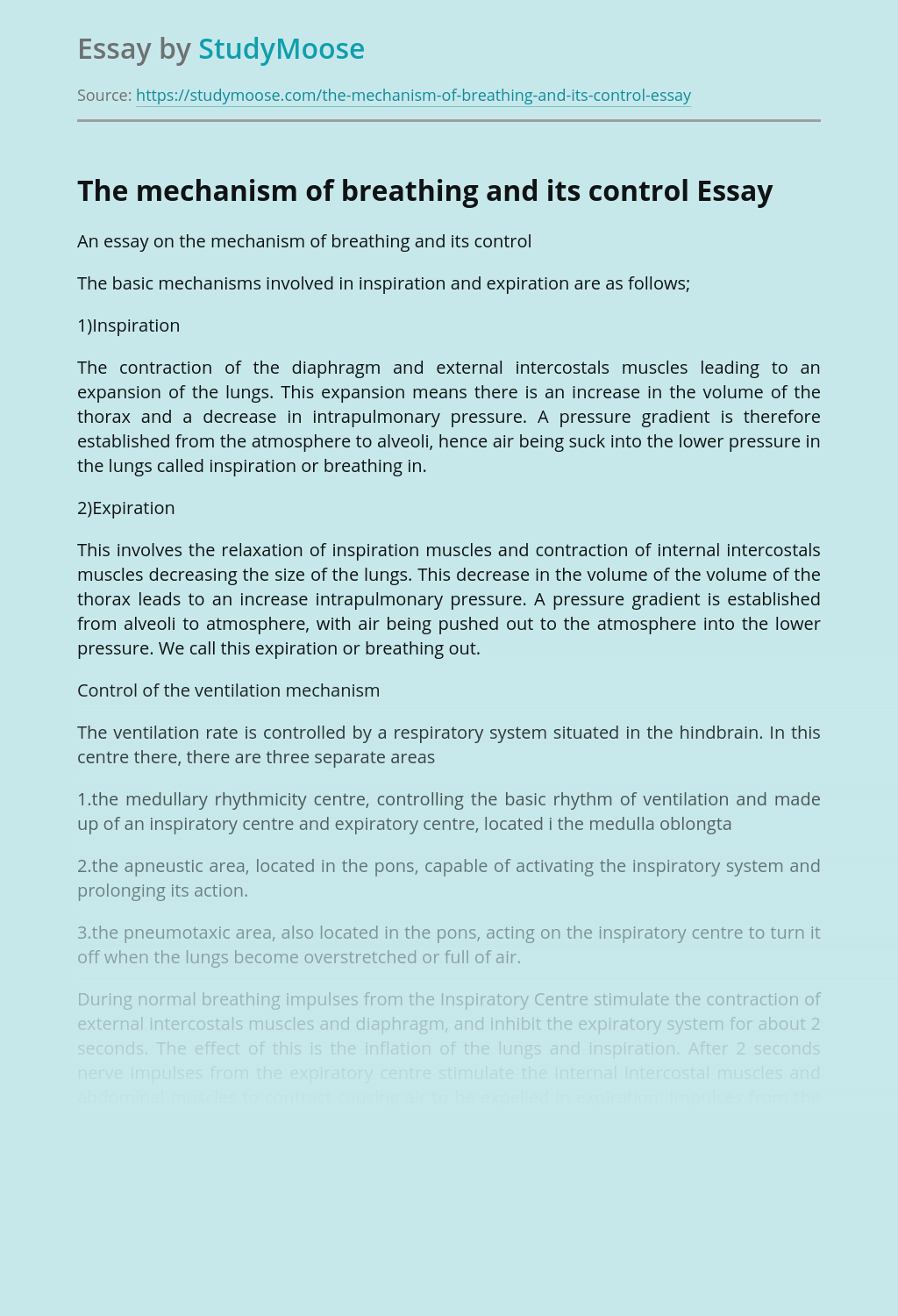 Turn in your highest-quality paper
Get a qualified writer to help you with
“ Control of Breathing – An Overview ”
Get high-quality paper
Helping students since 2015
Stay Safe, Stay Original