Breathing UnderwaterBreathing Underwater by Alex Flinn is written as a series of journal entries. The journal is written by Nick as an assignment from the judge who also sends him to anger management after the girlfriend he beat up finally presses charges. The book was published in 2001, before the recent increase in dating violence novels, and it tells a story often overlooked, that of the abuser instead of the abused.

Don't use plagiarized sources. Get your custom essay on
“ Breathing Underwater by Alex Flinn ”
Get custom paper
NEW! smart matching with writer

And it tells a hard story. Because while Nick is (obviously) not without his faults, he most certainly has his good points as well. And as I read I found myself feeling… not sympathetic, exactly, but definitely feeling something, more than I thought I would.

Initially, Nick is angry at being forced into these group anger management classes and he hates the idea of having to keep a journal. He doesn’t think he has a problem, thinks he just needs to pretend to clean up a little so he can get Caitlin back, get the courts out of his face and everything can be perfect again.

Because we are reading Nick’s journal, we are privy to his thoughts, his perceptions and misconceptions. But we are also able to read between the lines and recognize that we are missing things, both because Nick is leaving them out and because Nick simply doesn’t see them.

The initial entries into the journal are very sarcastic and emotionless. It’s clear that Nick doesn’t want to be bothered with a journal and that he thinks it’s stupid.

But as Nick’s story progresses, more and more emotions leak onto the pages until Nick is really keeping a journal and using it as a way to organize his thoughts and face up to painful memories and truths.

This is a book with astounding character growth. We learn enough about Nick throughout the course of the story to know that his life is not as easy or golden as his school friends always believed it to be. And Caitlin knew this, which is perhaps the reason that she stayed with him for so long, forgave him so many times. But, even though Flinn offers up Nick’s back story, allowing us to get to know who he is and what life experiences have shaped him, she never excuses or justifies his behavior, and ultimately Nick is not allowed that either.

The group anger management class ends up being the best thing that ever happened to Nick, both because of the sympathetic and understanding instructor, and because Nick can see himself in the actions of some of the other members of the class and he doesn’t like what he sees. For such self-assessment to come from a 16 year old who then takes it and applies it to making himself better is amazing. Nick really grows as a person and while I don’t think Caitlin should ever take him back, I also think that he would not easily allow himself to fall back into the patterns of an abusive relationship. He really gets it.

This is a story that needed to be told and needs to be read by more people. I don’t think enough people know about this book and I don’t think it’s one that should be missed. It’s painfully hard to read at times. Nick doesn’t hide the nasty things he said to Caitlin, because in the beginning, he doesn’t think there is anything wrong with what he’s done. And then, as he begins to recognize what was wrong with his actions, he starts to expose more of his internal motivations for being so cruel and the thought to action correlation begins to make more sense.

Flinn is brave for taking an oft told story and telling the unspoken side of things. It would be easy, in a novel about an abuser to make him either evil and terrible or to justify his behaviors to the point of absolution. But abuse is not a misunderstanding and it’s rarely so simple as to be the actions of the truly evil. And Flinn has captured that beautifully. Nick is human. He is flawed and over time, he begins to accept that and work toward a change.

THIS is what Contemporary is all about. Finding these novels that capture a moment in the human experience and open your eyes to it, make you recognize it for what it is, make you learn and grow as a person and help to open windows of understanding into subjects otherwise closed to us. Every side has two stories and it is a brave writer who can so masterfully tell the unpopular one. 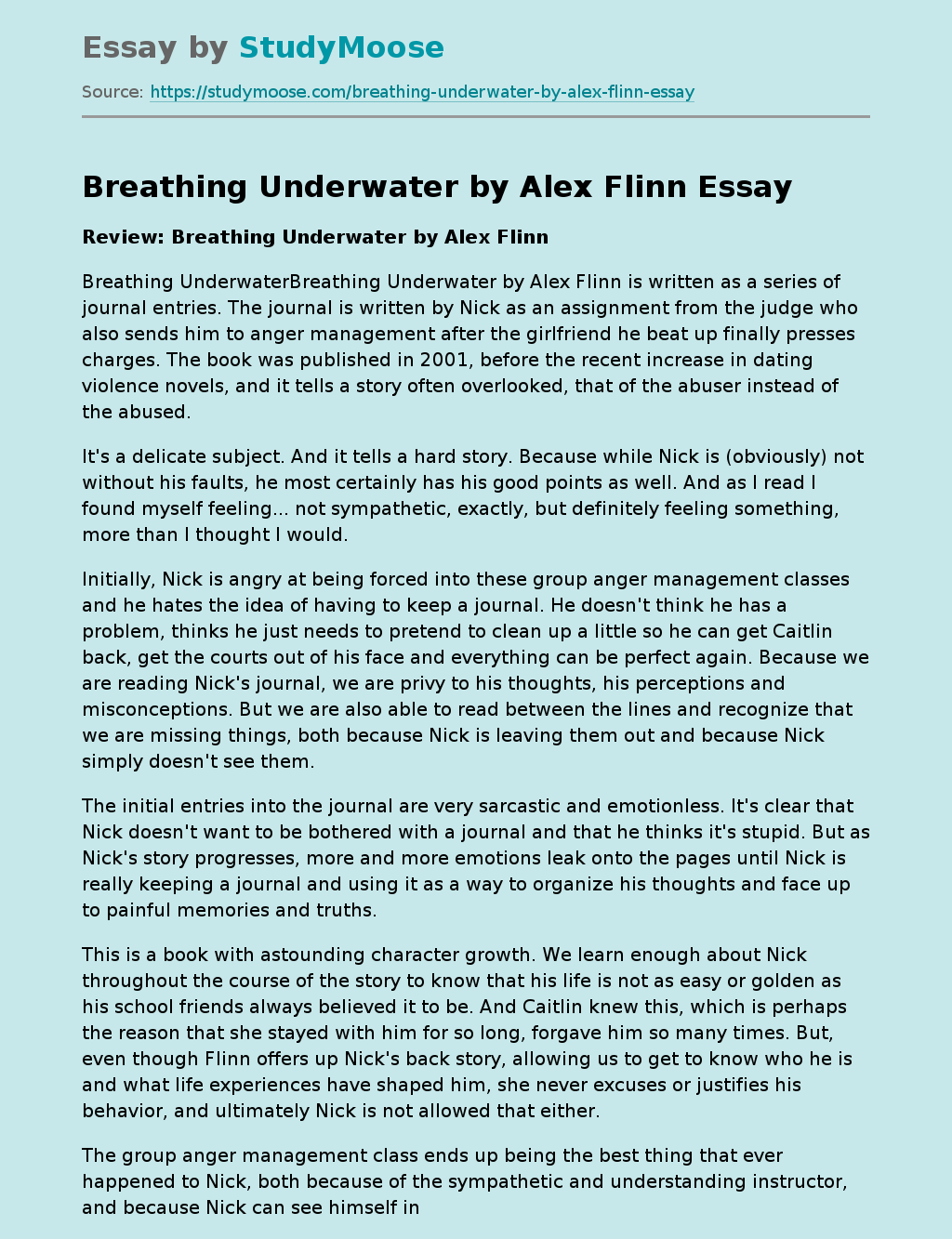