The Benefits of Underwater Archaeology

First began in the 19th century when John Deane and Charles Dean excavated the Mary Rose shipwreck (Papadopoulos). It is the scientific study, recording and interpretation of the past through the material culture and the remains of human activities that are lying in any aquatic environment. Before the invention of scuba gear, excavations predominately took place on land. Due to the vast differences in the environment surrounding excavations on water as compared to on land, different techniques and equipment must be used.

Don't use plagiarized sources. Get your custom essay on
“ The Benefits of Underwater Archaeology ”
Get custom paper
NEW! smart matching with writer

These different techniques have different strengths and weaknesses. However, one main difference separates the two which is that underwater archaeology preserves the remains better providing more information on virtually all artifacts found underwater. The analysis of the artifacts found at the Ulu Burun shipwreck is concrete evidence for the importance and extent of trade in the Late Bronze Age.

One of the main sites of underwater archaeology are shipwrecks. One advantage that shipwrecks have over other sites is that usually ships carry important items that need to be transported.

As a result of this, a shipwreck preserves a largely contemporaneous group of artifacts which was not intended for discard. However, land sites often contain significant quantities of redundant materials, that were disposed of by the people living during that period. Thus, underwater archaeology might provide more useful information on certain topics such as the importance of particular artifacts in people’s lives at the time. Another advantage is that shipwrecks have many similarities such as they broadly have the same shape and are made of the same materials.

Such characteristics are common to virtually all wrecks regardless of date, place and type, and allow wrecks from widely differing archaeological and historical contexts to be examined using similar investigative methodologies and research strategies (Gibbins and Adams 2001: 287).

This significantly reduces the cost of underwater archaeology and also the time taken to excavate underwater. However, underwater archaeology is more hazardous than on land and requires more equipment and diving skills. The depth that divers can reach and the length of time that they can stay underwater is limited. Marine creatures also pose a threat to divers and equipment. Additionally, certain artifacts found underwater may become more difficult to handle than those on land. In tropical waters, coral is a constant nuisance as it grows on any material and effectively covers everything. Pure coral is easy to remove with various acids, but if other elements are present in the coral, it becomes harder to remove. For example, iron-impregnated coral, which may form around rusted iron bolts, hanks of tarred rope, and thin fragments of porcelain, is highly resistant to mechanical action and solvents. Algae found in fresh water covers artifacts, creating a coating that is resistant to anything but abrasive action, which is usually impractical to apply because it may damage the artifact. Iron and manganese salts present in the water stain materials, completely changing and darkening bone, flint, and pottery (Goggin 1960: 350). Therefore, underwater archaeology may be able to provide only limited information on artifacts that contain iron or other such elements.

Nevertheless, underwater artifacts often have qualities that are not commonly found in those on land. For example, the broken pottery that is found underwater usually consists of fragments the size of its original breaking. Whereas broken pottery found on land consists of tiny fragments due to many years of trampling. Perishable materials such as plant and animal remains are far better preserved under water than on land. This provides additional information because shipwrecks can be dated using dendrochronology which uses the timber of ships to date when the ship was built. Such remains also provide information on the area where the ship was built, which archaeologists may not have known had the remains been on land (Goggin 1960: 350). In certain cases, underwater ruins are easier to excavate than ruins on land because artifacts naturally come to the top of the sea bed or river bed. For example, tidal variations and dry summers in Ireland often lead to the exposure of remains that were buried under the ground (Connor 1989: 26). This is another example of how the cost of underwater archaeology may be reduced. There are certain parts of history that only underwater archaeology can provide information on such as the history of naval warfare. Naval warfare leads to destruction of submarines and ships. These shipwrecks contain important information about the period in which they were built. The information that these shipwrecks contain can only be acquired and preserved by underwater archaeology.

The Ulu Burun shipwreck has been regarded as one of the most important indicators of a sea route for transportation of materials from the east to the west parts of the world (Pulak 2008: 291). Scholarship has acknowledged that virtually all the evidence indicates a Levantine origin and an Aegean destination. For example, the type of stone anchors of the ship is common in the Levant, but not in the Aegean (Bass 1991: 74), and the quantity of Aegean transport vessels is minimal when compared to the huge number of Near Eastern pithoi and amphorae (Bachhuber 2006: 347). Another example is that a few tons of tin ingots were found at the shipwreck, which were most likely obtained through trade from Anatolia or regions east of Mesopotamia (Pulak 2008: 292). Tin was lacking in Cyprus, which supports the argument that tin ingots were shipped via the Levantine coast (Pulak 2001: 22). All of the used oil lamps recovered are of a Syro-Palestinian type, whereas the Cypriot oil lamps are unused and have been found packed in pithoi ready for export (Pulak 2001: 14).

The shipwreck contained large amounts of cargo including amphorae, ingots, jewelry and pottery from many regions of the world. Over 10 tons of copper was present in the form of 354 rectangular slab ingots (317 of which were in the typical oxhide shape) each with an average weight of 24 kg (Pulak 2008: 291). The primary source of copper for the Mediterranean and Near East at the time was Cyprus. Lead-isotope analysis of the Ulu Burun ingots has confirmed this statement (Pulak 2008: 292). Around 170 glass ingots were found, which were obtained from both Egypt and the wider the Near East, as is suggested by chemical analyses of the alkalis and the coloring agents. Other raw materials included logs of Egyptian ebony, Egyptian ivory in the form of hippopotamus teeth and a short section of an elephant tusk, and terebinth resin, presumably also from Egypt (Pulak 2008: 293-295).

Gold and silver jewelry was also found at the site of the shipwreck, mostly Canaanite in origin. These findings corroborate the fact that Egypt was the primary source of gold for the entire Near East and Eastern Mediterranean at the time. Lead-isotope analysis of the silver found on the Ulu Burun shipwreck indicates that the majority of what was found originated in southern Anatolia, a region which was already well known for this metal (Pulak 2008: 297).

The Ulu Burun shipwreck brought to light the range of items that were being traded. The cargo contained raw materials such as copper and glass ingots, weapons such as daggers and spearheads, ivory, edibles, pottery, artifacts of gold and silver such as figurines and jewelry such as medallions and pendants. The vast array of artifacts listed above shows the expanse of trade that existed at the time.

It is evident that underwater archaeology has its advantages such as better preservation of remains and ease of excavation, but also has its disadvantages such as increased danger while excavating ruins and limited time at the site. However, it provides information about that period of time that is quite different from that provided by excavation on land such as information on sea trade. One such example is the Ulu Burun shipwreck, which gives a lot of information about the existing trade routes at the time. The cargo contains artifacts from regions all over the world such as Egypt, Anatolia and the Levant, indicating that trade was flourishing in the Late Bronze Age.

The Benefits of Underwater Archaeology. (2021, Mar 04). Retrieved from https://studymoose.com/the-benefits-of-underwater-archaeology-essay 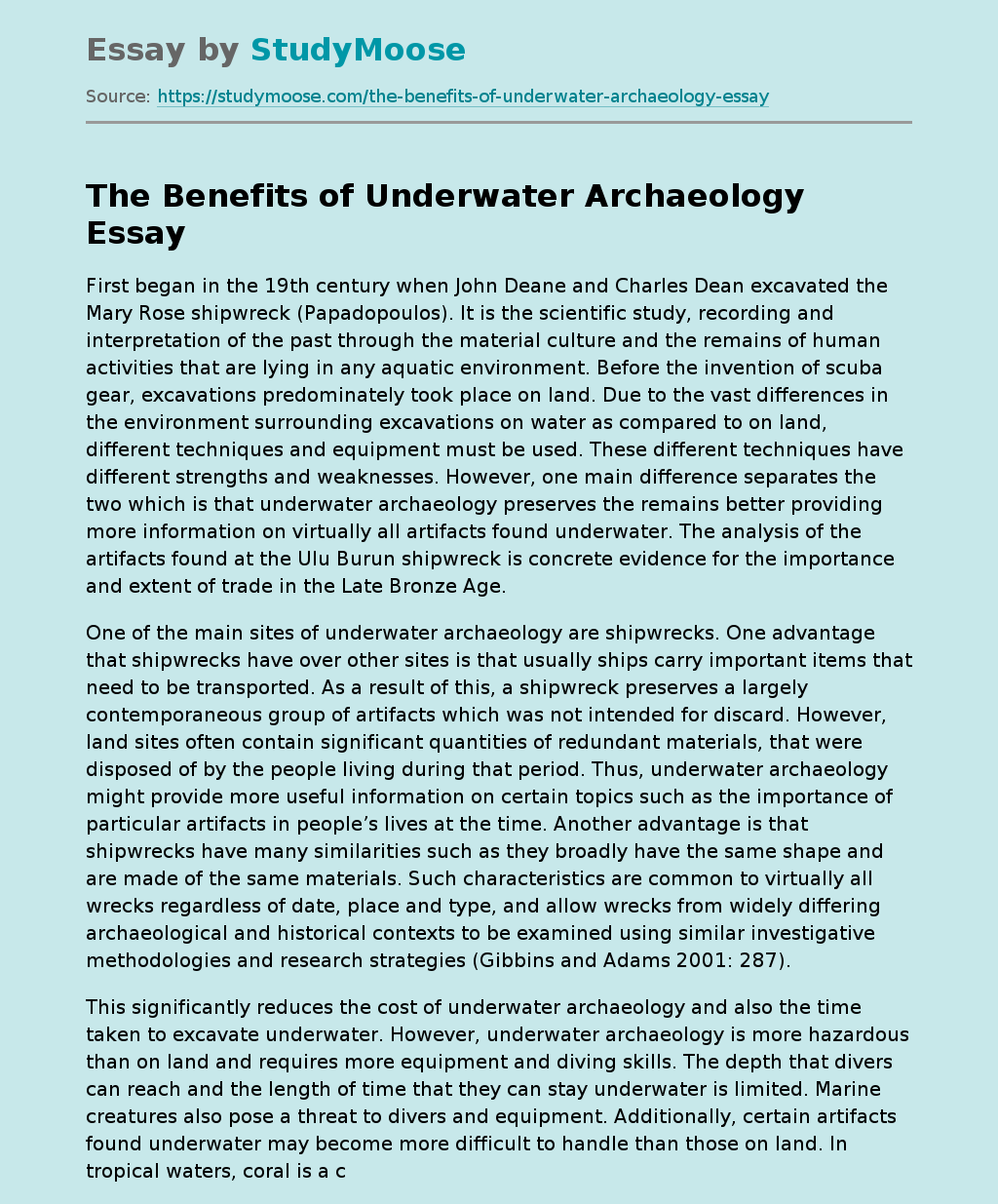