A typical production possibility frontier is based on four simplifying assumptions:1.The economy only produces two types of goods and services2.The state of technology remains unchanged3.The quantity of resources remains unchanged4.All resources are fully employedUsing the given assumptions, a production possibility frontier may be constructed. Fig 1.1 shows all the maximum possible combination of the production of wheat and cars in an economy when all resources are employed.

Society must make decisions on which combination is most desirable, and thus, involving an opportunity cost.

This is shown at point C on the line where in order to obtain 40 units of clothing, 50 units of food must be given up. The line AB shows the ideal spot in which an economy should lie as it signifies that all resources are efficiently employed, however in reality, this is often not the case and the problem of unemployment arises. Unemployment in an economy can be clearly identified in a production possibility frontier as the position of the economy would be shifted into the area within the curve.

This is demonstrated in Fig 1.1 by X.

Economy X is illustrated as producing 100 units of wheat and 40 units of cars, significantly reduced from the potential production of 150 units of wheat or 80 units of cars. This inefficient use of resources negatively impacts on the economy as the potential profit of the whole economy is reduced and resources are wasted. The production possibility frontier is able to clearly visualise the relationship between the production of two goods and services and indicate the state of an economy and its allocation of resources thus demonstrate the problem of unemployment and how it affects the economy’s profit and future implications.

A change in the production possibility frontier may occur with technological improvements. This would often shift the curve in an outward direction, signifying the economy being able to develop a high quantity of goods or services with the same number of resource.

In many cases, the technological advancement may only benefit to one of the goods or services. For example, the discovery of a genetic code to harvest wheat faster will benefit the production of wheat however, having no effect on the production of cars. This is shown in Fig 1.2 by the line DB where the line is shifted outwards from point A to point D and gradually declining to point B. In this case, 250 units of wheat may be produced as opposed to the original 200 units, providing a gain in production, and thus, the economy’s profits.

On the other hand, if the technological advancement benefit both of the goods or services equally, it will cause the curve to shift outwards parallel to the original. An example may be new machinery developed that aids in the production of cars and wheat. This is demonstrated in Fig 1.3 where line AB shifts outwards to line DE. However, this parallel movement of the curve usually occurs with the discovery of new resources.

Economic growth refers to an economy’s capacity to produce more goods and services. Factors of economic growth includes: technological improvement; discovery of new resources; increase in population, thus increase in labour. This may be clearly presented with the production possibility frontier by comparing the curves of a past or present economy to a present or future economy. This may be seen in Fig 1.4 where the curve is stretched outwards and the potential production rate is increased. For example point C on the line AB producing 150 units of wheat and 40 units of cars will be shifted to point F, producing 200 units of wheat and 50 units of cars.

Economic growth indicates a benefit to our society as more wants and needs will be satisfied in the society, thus improving the standard of living of individuals in the economy. This implicates that the economy will be able to support a larger population and provide better facilities or environment.

A production possibility frontier may be described as one of the essential tools in economics. It allows the viewer to graphically identify the relationships of two different types of goods or services, compare the past/present/future status of an economy and identify the position of the economy in relations to the curve. It demonstrates the problem of unemployment, the effects of technological changes and the benefits of economic growth. 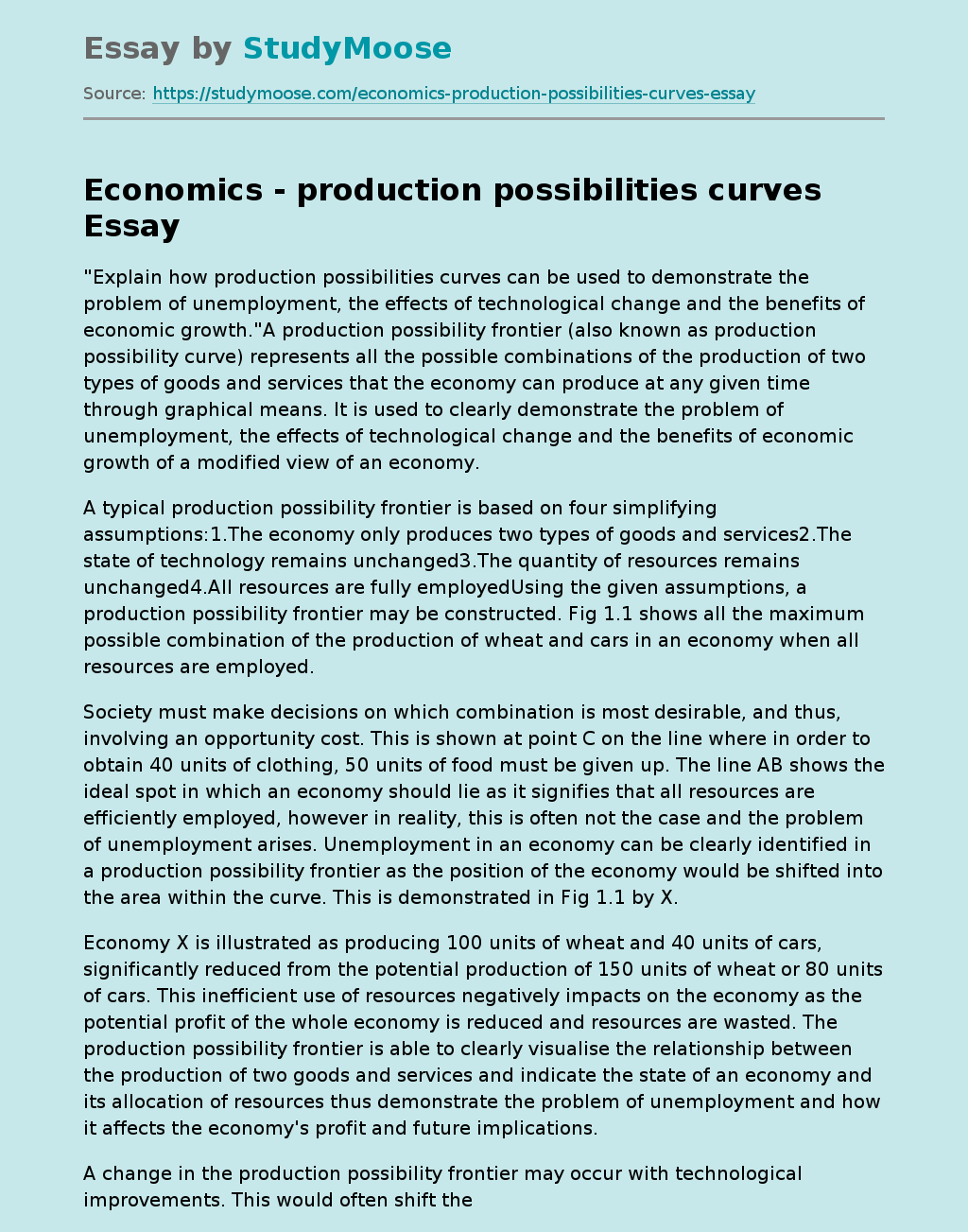